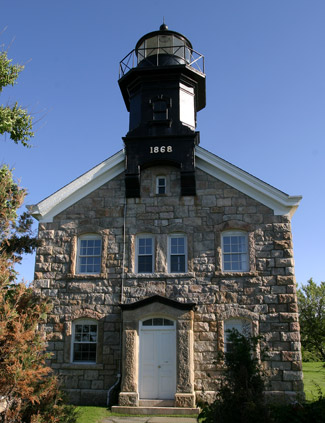 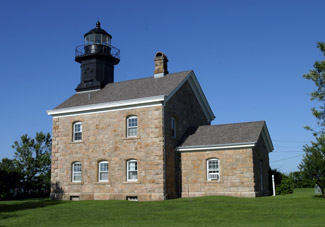 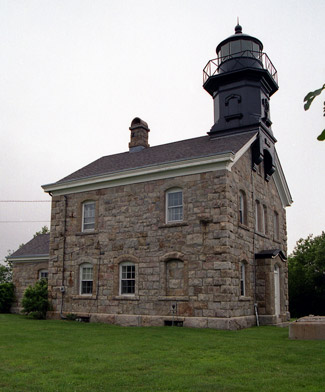 Before the first lighthouse at Old Field Point was completed in 1823, there were no lighthouses on the north shore of Long Island between Eatons Neck and Little Gull Island. Maritime traffic on Long Island Sound was steadily increasing, and additional warnings for the many rocky shoals and sandy reefs were needed. Congress allocated $2,500 in 1822 and $1,500 in 1823 for construction of a lighthouse at Old Field Point as soon as jurisdiction over the necessary land was ceded to the United States. A three-acre parcel was purchased from Samuel Ludlow Thompson and Ruth Thompson for $600, with the property boundaries being defined by the high water mark, a fence, and a cherry tree. The final construction cost came to $3,999.25, with the remaining seventy-five cents being put into the surplus fund. The plastered octagonal stone tower stood thirty feet tall, and there was a separate one-and-a-half-story, five-room keepers dwelling located inland from the tower. The contract for building the two structures and for digging a well went to Timothy, Ezra, and Elisha Daboll, who submitted the low bid of $2,980. Although this first tower is gone, the original keepers house is still standing on the east side of the current lighthouse. Activated in 1824, the beacon at the lighthouse was a Winslow Lewis multi-lamp and reflector combination, showing a fixed white light sixty-seven feet above the water that was visible for thirteen nautical miles.

Before a lightship was stationed off Stratford Shoal in 1837, mariners were instructed to steer from Falkners Island S.W. by W. ¾ W. for Old Field Point, 8 leagues, which took them south of the dangerous shoal, but they were also warned to come no nearer Old Field Point than 8 fathoms (distant half a mile) in the night to avoid the large rocks off the point.

The establishment of lighthouses at Old Field Point and Stratford Point, on opposite shores of Long Island Sound, was essential to helping ships avoid Stratford Shoal during those frequent times that the lightship dragged its anchor and went off station. Lt. George Bache, in his 1838 report, had recommended that one or both of the onshore lighthouses could be discontinued after a new lighthouse was built on the shoal, but fortunately for local mariners, after Stratford Shoal Lighthouse went into operation in 1877, the other lights remained active, helping to save many a ship in fog and other periods of low visibility.

A fourth-order Fresnel lens was installed in the towers lantern room in 1855, replacing an array of nine lamps and sixteen-inch reflectors that consumed around 350 gallons of oil each year. The current Old Field Point Lighthouse was finished in 1869, after Congress provided $12,000 on March 3, 1867 for its construction. The two-story granite structure stands roughly fifty feet tall, and its walls are two feet thick. The twenty-eight-foot cast-iron tower is square with beveled edges and topped by a circular lantern room, which housed the fourth-order Henry-Lepaute Fresnel lens that had been installed in the original tower. The lighthouse is constructed in the Victorian-Gothic Revival style, similar to Block Island North Lighthouse in Rhode Island, Morgan Point , Sheffield Island, and Great Captain Island lighthouses in Connecticut, and Long Islands Plum Island Lighthouse.

The female keepers at Old Field Point never reached national fame like Ida Lewis at Rhode Islands Lime Rock Lighthouse, but when Keeper Edward Shoemaker died in December of 1826, his widow assumed his post for the following six months. She (ironically, her name is not noted) was the first female keeper in the Third District and one of the first in the nation.

The next keeper was Walter Smith, who took over in June 1827. When he passed away in April 1830 his wife Elizabeth, who was already familiar with station duties from assisting her husband, took over as head keeper. She remained at her post for twenty-six years, after which she was succeeded by another woman, Mary A. Foster.

In 1833, Keeper Elizabeth Smith wrote to her superior asking that a small barn be built at the station to house horses. The Old Field Point station, like the one at Montauk Point, was very isolated and remote in those days, and a horse and wagon was essential for getting supplies. The requested horse barn was built, but almost fifty years later there was an urgent request for a replacement barn, since the old one was ready to drop to pieces.

In 1886, Capt. Francis Weller of the schooner Stony Brook filed a complaint with the Lighthouse Board against Keeper Charles F. Jayne, accusing him of refusing to come to the ships aid when it had run onto the rocks near the lighthouse and broken up. It was rare for keepers to refuse aid to ships in distress in their vicinity, and it was not unknown for ship captains to accuse lighthouse keepers of not sounding their foghorns or maintaining their lights properly, in an attempt to cover up their own incompetence.

An investigation launched by the Lighthouse Board concluded that the charges were frivolous and made for an interested motive. Perhaps the captain was ready to leave a hard life at sea and wanted the keeper post at Old Field Point for himself.

The keepers at Old Field Point did assist stranded vessels as evidence by Keeper Richard Ray, who in 1923 rescued two men whose powerboat had run aground on the rocks in front of the station. Ray brought the two men to the lighthouse, where he provided clothing, food, and shelter for them for the next two days.

A partition was put up in the stations original dwelling in 1888 to provide a barn for the keeper, and in 1902, a brick oil house was added to the station.

Thirty-two-year-old Edgar S. Maclay was appointed keeper of Old Field Point Lighthouse in 1895. Maclay was born in China, where his father was serving as a missionary, and attended Syracuse University, from which he graduated in 1885. After researching American history for a year in Europe, Maclay worked as a reporter for the Brooklyn Times and the New York Tribune and wrote the multi-volume History of the United States Navy from 1775 to 1894 before accepting employment as a lighthouse keeper. Maclay continued his writing at the lighthouse, penning A History of American Privateers, but his opinions expressed in his works eventually got him in trouble, and he was dismissed from government employ in 1901 for having called Rear Admiral Winfield Scott Schley a caitiff, poltroon and coward for his conduct in the Spanish-American War. Keeper Maclay had left the Lighthouse Service in 1900 and was working at the Brooklyn Naval Yard when he was forced to resign.

Old Field Point Lighthouse was deactivated in 1933, after having been replaced by a beacon atop a nearby steel tower. The lighthouse property was conveyed to the Village of Old Field in 1935 for public-park purposes, however, after the bombing of Pearl Harbor in 1941, the government seized the station, along with nearby Horton Point Lighthouse, for purposes of national defense. Horton Point was manned by aircraft spotters, while a small Coast Guard contingent occupied Old Field Point. After the war, both lighthouses were returned to their communities.

The Chief Constable of Old Field Village resides in the lighthouse, which has a living room, dining room, kitchen and den on the first floor, and three bedrooms and a bath upstairs. A modern beacon, now maintained by the Coast Guard, was placed back in the lantern room in 1991. The keepers dwelling from the 1824 lighthouse has served as the village hall since 1963.

Located at the end of Old Field Road in Old Field, which is approximately near the middle of Long Island's north shore.
Latitude: 40.97698, Longitude: -73.11863

For a larger map of Old Field Point Lighthouse, click the lighthouse in the above map.

The lighthouse is owned by the Village of Old Field. Grounds open. Dwelling/tower closed.