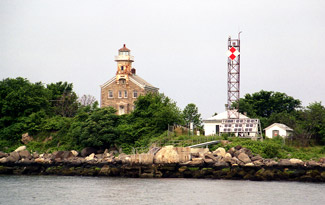 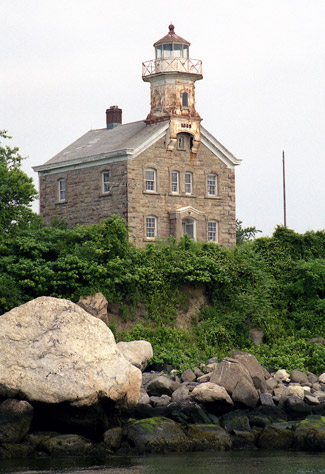 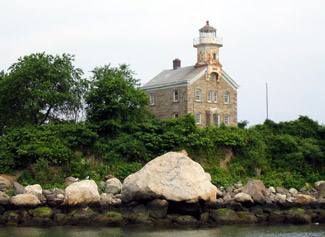 Great Captain Island is, at seventeen acres, the largest of a three-island group located about a mile offshore from Greenwich, Connecticut. The other two islands are Little Captain (more commonly known today as Island Beach) and Wee Captain, which is attached to Great Captain by a sandbar. According to local legend, the names of the islands are connected with a treasure of gold and silver buried there by the famous pirate Captain Kidd, but more reliable historical accounts say the islands are named after Captain Daniel Patrick, an early seventeenth-century Greenwich settler and the towns first military commander.

King George III of England originally granted the islands to one John Anderson in 1763, but when Anderson felled some trees on the island, the Bush family of Greenwich, who felt they owned the islands, sued him for trespassing. A court in Connecticut not surprisingly ruled in favor of its citizens, the Bushes. In turn, the New York Legislature declared in 1788 that the island was part of the New York town of Rye. Over a century later, the long simmering dispute was finally settled for good, when a commission gave Connecticut permanent jurisdiction over the islands.

Great Captain Island is located near the main shipping lanes of Long Island Sound amidst a number of small islands, ledges, shoals, and other maritime hazards, making it an ideal spot for a lighthouse. In 1829, Congress allocated $5,000 for that purpose, and three-and-a-half acres on the southeast part of Great Captain Island were sold to the federal government. (Both Connecticut and New York had to release the land to the government, since at that time they both still claimed ownership of the islands.)

Charles H. Smith was paid $2,950 for building Great Captain lighthouse and a dwelling house and fitting up the lighthouse with patent lamps and fourteen-inch reflectors. This first Great Captain Island Lighthouse, a thirty-foot tower built of rough stone, was described by Lt. Bache in 1838 as badly constructed. The mortar had not hardened properly and the walls were cracked in a number of places. The five-room keepers quarters, a stone structure separate from the lighthouse tower, was apparently in better shape. The original beacon consisted of ten lamps with parabolic reflectors and showed light in every direction. In 1858, this lighting apparatus was replaced with a fourth-order Fresnel lens showing a fixed white light.

There was continued grumbling about the sorry state of the tower, both inside and out, and the reliability of its equipment. Finally, Congress allocated $12,000 in 1867 to build a replacement lighthouse on the site. A design shared by other lighthouses in the area was chosen: a stone keepers dwelling with a cast-iron light tower on top of one end of the gabled roof. (The other lighthouses with this same design are Sheffield Island and Morgan Point in Connecticut; Old Field Point and Plum Island in New York; and Block Island North in Rhode Island.)

In 1885, seventeen-year-old Dean Worden, son of Keeper Eliakim Worden, was awarded a silver life-saving medal by the government for rescuing from drowning Charles P. Cowles, a New York lawyer who had broken through the ice while skating.

A steam-driven fog whistle was added in a separate new structure in 1889. In 1905, a duplicate compressed-air siren, powered by thirteen-horsepower oil engines, was installed in a new fog signal house and placed in service on June 10 of that year. Almost immediately, local residents complained of not being able to sleep at night due to the noise. Soon after, adjustments were made to the fog signal by dampening and/or readjusting its position, and the citizens of Greenwich once again slept soundly at night.

During the Prohibition Era, lighthouse keepers in the Northeast often came under suspicion for aiding bootleggers. The remote location of many lighthouses, often on lonely and sparsely inhabited islands, made them ideal places to transfer shipments of illegal booze between ships for redistribution purposes. In 1925, the Coast Guard, acting on a tip, came to Great Captain Island to investigate reports of suspicious bootlegging activity. Seventy-five empty whiskey cases were found, too far inland for them to have simply washed ashore. Even though the keeper at Great Captain Island Lighthouse had several times before notified the Coast Guard of illegal liquor-related activities in the area, he nevertheless was held and questioned as a possible accomplice. He was eventually cleared of any wrongdoing and continued to mind the light.

On March 31, 1926, Keeper Rudolph Iten imperiled his life to take a rowboat across 100 feet of torn and angry water and pick up three negroes from the disabled ferryboat Thomas D. Brennan, which broke away from the tow of the tug Bronx No. 2 and drifted on a rock ledge near the light house.

Keeper Adam L. Kohlman, the last civilian keeper of the lighthouse, was transferred to Throgs Neck Lighthouse in 1944 and Coast Guard personnel were then assigned to look after Great Captain Island Lighthouse. On the morning of November 30, 1945, Frederick W. Priabe and Americo J. Rametti, two twenty-four-year-old coastguardsmen assigned to the lighthouse, left the station in a small outboard motorboat headed for Port Chester to pick up supplies. Shortly thereafter, a resident of Port Chester telephoned the station with news that two coastguardsmen were in the water, trying to hold on to their boat that had overturned in a storm. Both men perished, and the body of Priabe later washed ashore on the beach of St. Josephat's Monastery on Long Island. Rametti left behind a wife and daughter.

During the mid-20th century a number of schemes for private development of Great Captain Island were proposed, including an exclusive country club, a casino, and a vacation spot for employees of a local company. In 1966, the Town of Greenwich purchased all of Great Captain Island, except for the lighthouse grounds, from Aerotech Corporation for $90,000. The remaining three-and-one-half acres containing the tower and keepers quarters were obtained from the U.S. government in 1973, after the light had been transferred to a skeletal tower in 1970.

Caretakers resided in the lighthouse until 2003, when the structure was deemed too dilapidated to live in. The Greenwich Chamber of Commerce and Indian Harbor Yacht Club launched a campaign called "Return the Light" to restore the lighthouse in the late 1990s. Ben Fisher, who helped champion the cause, was killed in the attack on the World Trade Center Towers in 2001, and a good share of the $305,000 in private donations toward the project were made in Fisher's name. The Town of Greenwich also committed significant funds to the project, and in May 2008, a $1.13 million contract was awarded to Trumbull-based Tomlinson Hawley Patterson to restore the lighthouse. As part of the renovation, a bronze plaque with local victims' names was placed on a boulder near the lighthouse. Twelve residents and fourteen others with ties to Greenwich died in the 9/11 attacks. Most were employed at the World Trade Center; two were aboard the hijacked planes.

As restoration work neared completion, Mike Nickerson and his family were allowed to move into a two-bedroom apartment on the ground floor of the lighthouse in May 2009. At that time, Nickerson had been caretaker of the island for six years, and had previously been living in a small cottage on the island. As a final touch to the restoration efforts, a four-second flashing green light was activated in the lighthouse in November 2011. This light is ornamental and does not replace the Coast Guard's red-and-white light located about 300 feet from the lighthouse.

The island today remains in a largely natural state. Egrets, herons, osprey, and a number of other bird species can be seen nesting or stopping off during their annual migrations. A trail system has been laid out for visitors, and the western part of the island features picnic tables, grills, restrooms, and posted swimming areas. Great Captains Island is open year round, with a ferry to the island running during the summer months. The ferry was limited to Greenwich residents and their guests for years but is now available to the general public.

For a larger map of Great Captain Island Lighthouse, click the lighthouse in the above map.

The ferry that provides access to the island only runs during the summer. The ferry was formerly restricted to residents holding a park pass and their guests but is now reportedly available for everyone.

The lighthouse is owned by the Town of Greenwich. Grounds open, dwelling/tower closed.