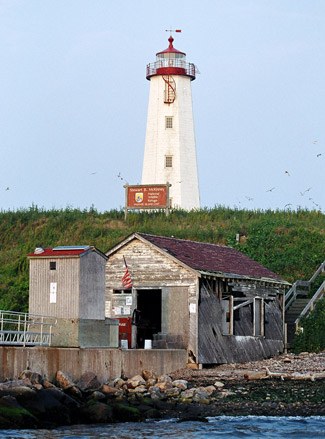 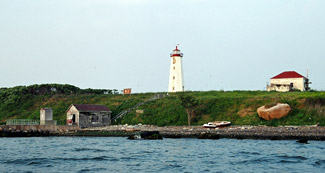 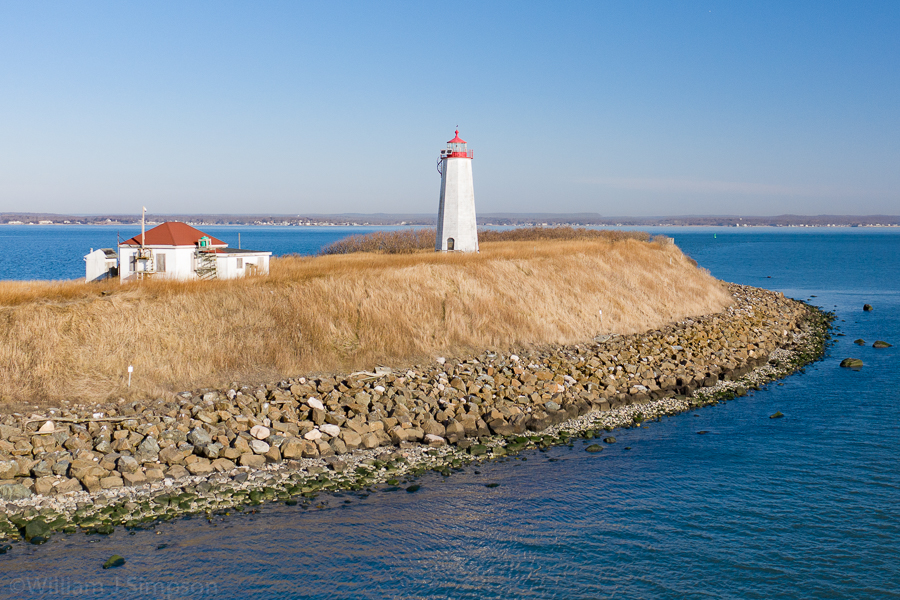 Built in 1802, Faulkners Island Lighthouse has been called the Eiffel Tower of Long Island Sound. The island on which the lighthouse stands has also had other titles over the years including Falkner Island, Falcon Island, and Fortune Island.

The crescent-shaped island, located about three-and-a-half miles offshore from Guilford, Connecticut, had a number of owners in its pre-lighthouse days. Andrew Leete, son of a Connecticut governor, owned it for a while during the 1600s. Brothers Caleb and Ebenezer Stone bought the island in 1715, and it remained in the Stone family for over a century.

Ship traffic in the Sound increased steadily during the eighteenth century, and many ships ran aground on the reefs surrounding the small, three-acre island. The sum of $6,000 was appropriated for a lighthouse on the island in 1801, and Abisha Woodward and John McComb, Jr. agreed to complete the lighthouse for $5,500. Both of these applicants were experienced in lighthouse construction, with Woodward having worked on Bald Head Lighthouse in North Carolina and McComb on several lighthouses including those on Montauk Point and Eatons Neck on Long Island. Woodward was chosen as the contractor as he offered to face the tower with hewn stone.

In 1802, Woodward erected a forty-foot-tall, octagonal tower, featuring cut sandstone laid in lime mortar and a spiral wooden staircase that led up to the lantern room. In early years, the station exhibited a fixed light from twelve lamps and reflectors arranged on two separate tables, one above the other. In 1856, a fourth-order Fresnel lens was installed that varied its fixed light with a flash every ninety seconds. Another lens of the same size was supplied in 1901 to produce a flash at the rate of once every fifteen seconds.

The original keepers dwelling had eight rooms, but over the years it deteriorated so badly that a new one was constructed in 1858. The new structure was one-and-a-half stories high, and featured three bedrooms, a dining room, sitting room, and an attached kitchen that was connected to the tower by a covered passageway. This structure was so poorly built that during the winter large quantities of snow entered through gaps in the walls and roof. In 1871, another story, topped with a mansard roof, was added to the dwelling to provide room for an assistant keeper, and at the same time an iron spiral staircase was installed in the tower.

Faulkners Island light has had a number of interesting keepers over the centuries. In 1818, President James Monroe appointed Eli Kimberly, a Guilford native, keeper of the lighthouse. Kimberly relocated to the island with his pregnant wife Polly and two young children, and during their thirty-three years on the island, the couple had another nine children.

Although the island was lonely and remote during the winter, there could be hundreds of visitors in the summer, and the Kimberlys were known as excellent hosts. The keeper even built a bowling alley (!) with a well-stocked bar. Unfortunately, on the Fourth of July in 1829, a group of twenty young men from New Haven drank themselves senseless at the bar, then tore up the Kimberlys vegetable garden, smashed some lighthouse equipment, and destroyed the keepers boat. Soon after, a law was passed prohibiting the sale of liquor at American light stations.

Another unique character was Oliver Brooks, who was head keeper from 1851 to 1882. Brooks played the violin to pass the time at the lonely station, and also practiced his taxidermy skills on birds that suffered fatal crashes into the lantern windows. Eventually, the keepers house filled with stuffed birds and was a natural history museum of sorts. On the morning of May 16, 1878, Keeper Brooks picked up 216 dead birds at the foot of the lighthouse, and there was about three times that number that were so disabled they couldnt get off the island.

Brooks received some notoriety in November 1858 when, during a winter storm, he managed to rescue five people from the schooner Moses F. Webb that grounded on the rocks near the lighthouse. For his bravery in assisting mariners, Brooks was awarded a gold medal from the New York Society for the Preservation of Life along with a silver set from the citizens of New Haven.

Throughout the nineteenth century, ships continued to be wrecked despite the presence of the lighthouse. Between 1851 and 1882, over one hundred wrecks were recorded in the stations logs. In the spring of 1874, the Lighthouse Board received a petition from steamship companies and other parties interested in navigation on the Sound asking that a powerful fog signal be established on Faulkners Island. A fog bell had recently been placed on the island, but it was found to be wholly inadequate, and lack of a proper fog signal likely contributed to the steamer E.A. Woodward running aground on the reef north of the island on February 7, 1875. The fog bell was raised ten feet in 1877 so that its sound might be heard to better advantage.

Congress finally appropriated funds for a first-class steam fog signal on the island in 1879, and the apparatus was placed in operation the following year. In order to collect sufficient water for the steam whistle, a large shed and cistern were placed on the island. The whistle, which produced an eight-second blast each minute when needed, was in operation roughly 500 hours each year while consuming around thirty-eight tons of coal. A first-class siren, operated by twin sixteen-and-a-half-horsepower oil engines with compressed-air attachments, replaced the antiquated steam whistle in October 1902, after an experiment had been conducted on the island the previous month to determine the range of penetration of sound for a whistle, siren, and a diaphone.

Arthur Jensen replaced Elmer Rathbun as head keeper on the island in 1911 and held this position for five years. One day, Keeper Jensen sprained his back and was unable to stand, let alone work. As the assistant keeper was ashore, Ingrid Jensen, Arthurs wife, was forced to take charge. The following account of her actions was carried in the Shoreline Times:

Mrs. Arthur Jensen, wife of Keeper Jensen of Faulkners Island Light Station, proved equal to the emergency, which recently arose at the light station, in a manner which commands the admiration of those who know the conditions. Keeper Jensen was ill and unable to rise owing to muscular ailment. The assistant keeper had gone ashore and was unable to return that night. There arose a dense fog requiring the starting of the oil engine, which runs the fog siren. Few women, even had they the skill, could have mustered the strength to perform this feat, which is a task for a strong man. Yet Mrs. Jensen, knowing that the siren must be started and that there was no one but herself to do it, took hold of the fly wheel, five feet in diameter, rolled it back against the compression, and so started into action the machinery which sounded the warning siren. Mrs. Jensen ran the engine four hours, until the fog cleared away, and also lighted the lamp in the tower and watched it all night long. Those who are familiar with the working of these oil engines, marvel that a woman could start the fly wheel, as considerable strength is required, as well as the knowledge and skill born of experience. Mrs. Jensen kept the station running that night, single handed, by sheer force of ability, and is entitled to much commendation.

James Marshall was serving on Faulkner's Island in 1958. Christmas Day that year was bitter cold, and Marshall could not get the diesel generators to start that charged a large bank of batteries for powering the light. He worked at it from 7 a.m. until 4 p.m., and then out of desperation held a blow torch to the fuel lines, which finally got the generators started after nine frustrating hours. A few weeks later, the men at the station ran out of cigarettes, three days before the supply boat was scheduled to arrive. After smoking old butts, tea, and about everything else combustible, the men decided one of them had to take the stations eight-foot dinghy with a small outboard motor into Guilford to buy cigarettes. Marshall drew the short straw and headed off for the three-and-a-half-mile trek to shore  an adventure that was against Coast Guard regulations and, at the time, was a court martial offense. The resulting two packs of Pall Malls were deemed worth the risk, and kept the men sane for a few more days.

On March 15, 1976, despite there being two coastguardsmen on duty, a fire broke out in the keepers quarters and destroyed everything except the scorched tower and the fog signal building. After repairing the tower, the light was automated. It continues to flash a white light every ten seconds, although the fog signal has been discontinued.

A pair of rabbits was left behind when the station was automated, and over the next few years a rabbit colony had developed that threatened nesting birds on the island. Various means of controlling the rabbit population were considered, but a local humane society finally solved the problem by sending out a ten-person team in October 1980 that was able to capture 115 rabbits in a seven-hour period. The humane society officers herded the rabbits into an enclosed pen at one end of the island, and were able to capture eighty-one rabbits in the first sweep and another thirty-four in the second. After being found disease free, the rabbits were put up for adoption.

Due to the dedicated efforts of a volunteer preservation group called Faulkners Light Brigade, Faulkners Island Lighthouse is one of Long Island Sounds brightest lighthouse preservation stories. Since its founding in 1991, the organization has restored and painted the lighthouse multiple times.

For a larger map of Faulkner's (Falkner's) Island Lighthouse, click the lighthouse in the above map.

Faulkners Island lighthouse is best seen by boat. There is usually an open house held during September, and public transportation to the lighthouse may be provided at that time by Faulkners Light Brigade. Please check out their Facebook page for the latest information on the lighthouse.

The lighthouse is owned by the Coast Guard, and the island is part of Stewart B. McKinney National Wildlife Refuge. Grounds/tower closed.


The time to visit Faulkner's Island is definitely in the evening, as the view of the lighthouse is best from the west side of the island. As you can tell from the pictures, the island is a nesting place for a large colony of roseate terns. Access to the island is thus restricted during the summer, but watching the birds dart about the island in an orange-tinged sky makes up for the limited access to the lighthouse. The short, external spiral staircase, which leads to the lantern room gallery, is a feature that I believe is unique to Faulkner's Island Lighthouse.