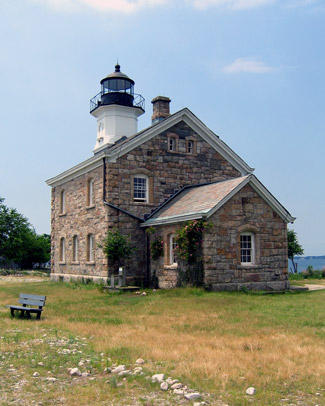 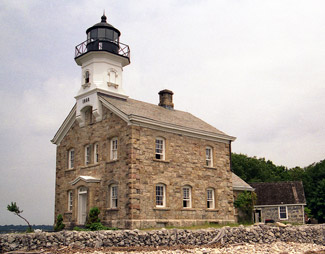 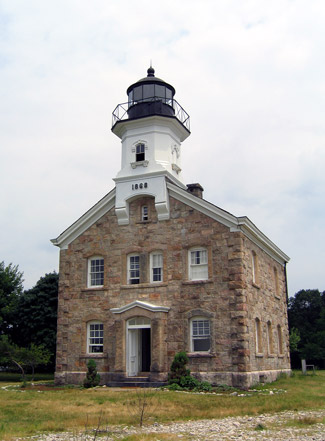 Fifty-two-acre Sheffield Island has a colorful history. The largest of the sixteen Norwalk Islands, it has had many previous names: Winnipauk, Little Longe, Longe, Whites, Smiths, Norwalk, and Home  with the names usually changing to reflect the owner at the time. The earliest written historical record involving the island dates from 1690, when a Norwalk Indian chief named Winnipauk deeded the island to Reverend Thomas Hanford, Norwalks first minister. After Hanford died in 1693, the paper trail grows cold for a few years, although there is evidence that in 1702 the island and the islands around it all became community property.

In 1804, Captain Robert Sheffield, a Revolutionary War veteran, purchased what became known as Sheffield and Tavern Islands. Sheffield married Temperance Doty, a Mayflower descendant , and they had a daughter, also named Temperance, who married Gershom Smith, a widower with one son. Smith moved to the island, and the couple eventually had a total of twelve children.

In 1826, agents of the U.S. Treasury Department (which was in charge of lighthouses at that time), after surveying various sites in the Norwalk Islands, decided that the western end of Sheffield Island was the most suitable spot for a light to mark Norwalk Harbor. By the middle of the next year, a thirty-foot-tall stone tower had been constructed. Eight people applied for the keeper position for the new lighthouse, and Gershom Smith was chosen. Smith was by now also the owner of Sheffield Island, and he sold three acres to the government to build the new tower. After moving his family into the stone keepers dwelling, Smith also built a barn and corn storage building near the lighthouse. When not occupied with station duties, he raised cows and other animals, grew crops, and collected oysters. At low tide, the cows tended to wander between islands and get stranded when the tide came in. At milking time, Smith dutifully rowed between islands to make sure each cow was milked.

During an 1838 inspection of the lighthouse, it was noted that the lighting apparatus consisted of ten lamps and an equal number of parabolic reflectors that were arranged in two clusters. One of the clusters had panes of red glass placed in front of each of its lamps and reflectors so that when the apparatus revolved it produced alternate red and white flashes. The interval between flashes was supposed to be two minutes and forty-five seconds, but Keeper Smith had reduced the interval to just sixty-six seconds due to complaints that the light was eclipsed for too long a period.

Gershom Smith remained keeper until 1845, when he was removed soon after President John Tyler took office. Smith was not a Tyler supporter, and the job security of lighthouse keepers in those days was subject to the political winds. Apparently the one and only qualification of Lewis Whitlock, Smiths successor, was that he supported Tyler, at least according to the Norwalk Gazette: Though a good-natured, good-for-nothing creature, [Whitlock] is about the last object, in which Gods image has not been wholly obliterated, that we should have selected for an officer of the United States of America.

Lewis Whitlock would remain keeper for sixteen years, even though an inspection report in 1850 didnt give the fifty-six-year-old keeper a glowing review: Keeper is alone, entirely so, and everything he has in the house is out of fix; nothing is done right nothing is as it should be. Poor man, and miserable, and will continue so without a wife.

There had long been complaints from mariners that the light at Sheffield Island was not bright enough, and that the tower was too short for the light to be properly seen. With the end of the Civil War, shipping traffic in the harbor increased, and in 1867 Congress appropriated funds to build a new lighthouse and keepers quarters.

The new structure was two-and-a-half stories tall and built out of granite blocks. At the front end of the roof, a cast-iron lantern tower rose to forty-six feet. A fourth-order Fresnel lens, which produced alternating red and white flashes and was installed in the old tower in 1858, was moved to the new lighthouse. The original keepers dwelling still stands behind the granite lighthouse, although the old tower was torn down and its site is now under water.

On August 17, 1869, the Norwalk Gazette published the following on the new lighthouse: The view from the top of the Sheffield Lighthouse, on a clear summer's day, is worth a journey of a thousand miles to see.

In July 1872, sixty-four-year-old Noah Mosher, who had been serving as keeper of Norwalk Island Lighthouse since 1861, fell dead from his chair while watching passing vessels with his spy glass. Keeper Moshers twenty-five year-old son, also named Noah, took charge of the light and served as keeper until resigning the position in 1878.

Around the beginning of the twentieth century, shipping traffic in Norwalk Harbor was at a peak, led by the booming oyster industry. The harbor was dredged and other improvements made, and a petition was circulated calling for the abandonment of Sheffield Island Light in favor of lights on Greens Ledge and Peck Ledge. Nearly every member of Norwalk Yacht Club signed the petition, along with oystermen, pilots, and many leading South Norwalk merchants. Sheffield Island Lighthouse was retired on February 15, 1902, although the keepers quarters remained a shore station for keepers at Greens Ledge for a few years more.

Keeper Samuel Armour, the last keeper of Sheffield Island Lighthouse, had a cow that made the local news:

Daisy follows the bent of her own free will. When in the humor, she will take to the water and swim to the mainland, two miles away. Sometimes she is gone two or three days and returns to the island of her own accord, but generally has to be sent after. Her milk is sold on Bell Island and it is sad news when word comes that Daisy has gone on another tear.

In 1914, the Lighthouse Service declared Sheffield Island Lighthouse surplus property and put it up for sale. The highest sealed bid was submitted by Thorsten O. Stabell of South Norwalk, who subsequently used the lighthouse as a summer residence. The lighthouse remained the property of the Stabell family until 1986, when it was sold to the Norwalk Seaport Association for $700,000. Checks totaling $160,000 were given to the Stabells at the time of the sale, and the association was given three years to come up with the remaining $540,000. This time table proved ambitious as it wasnt until 2000 that the mortgage was paid off and ceremonially burned. In 1987, the association hired a Norwalk math teacher named Bill Benton to live in the keepers quarters for the summer. Benton was the first resident keeper at the station since it was decommissioned in 1914. Benton didnt have to worry about lighting the lantern; his duties mainly included greeting visitors and answering their questions.

During the late 1980s the lighthouse was refurbished, mostly by volunteers, and in 1989, it was placed on the National Register of Historic Places. In 1992, a major storm flooded the basement with over four feet of water and washed away ten feet of shoreline near the tower. Hurricane Fran in 1996 inflicted more damage. To slow erosion, beach grass and roses were planted, and wire mesh frameworks filled with rocks were strategically placed about the island.

The Norwalk Seaport Association continues to raise funds to maintain Sheffield Island Lighthouse. Each year, the Oyster Festival, attended by tens of thousands of people, is the Seaport Associations biggest fund-raiser, with big-name entertainers such as Little Richard and the Charlie Daniels Band having appeared. Seasonal caretakers live at the station during the summer and open the lighthouse for tours. Much of Sheffield Island is now a wildlife refuge, boasting public trails and observation platforms.

For a larger map of Sheffield Island Lighthouse, click the lighthouse in the above map.

Ferry Service to Sheffield Island is available from Hope Dock in South Norwalk from May through September. Cruises that pass Sheffield Island Lighthouse are offered by The Maritime Aquarium at Norwalk.