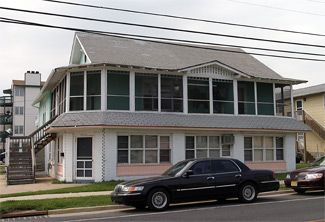 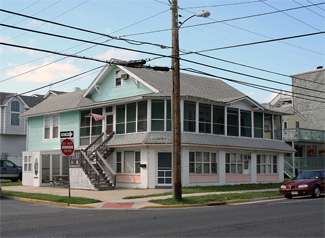 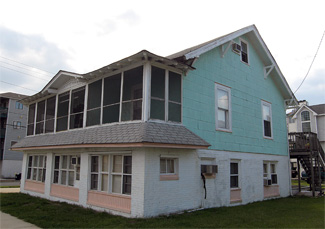 In the early 1880s, the Lighthouse Board recognized that a light was needed between Absecon Lighthouse in Atlantic City and Hereford Inlet Lighthouse at North Wildwood. The gap between these two lighthouses was thirty-three miles, and a site in Sea Isle City, twenty-one miles south of Absecon and twelve miles north of Hereford Inlet, was selected for the new lighthouse. Sea Isle City lots 15 & 16, situated along Ludlam Beach, were purchased, and plans for the combination lighthouse and keepers dwelling were drawn up in 1884. Besides serving as another light along the Jersey shore, Ludlam Beach Lighthouse also alerted mariners to a shoal located off nearby Townsend Inlet.

Bids for constructing the lighthouse were solicited in early 1885, and work was completed during the summer and fall of that year. The lighthouse was painted white with lead trim and had green shutters. Joshua H. Reeves, who had previously served as an assistant keeper at Barnegat Lighthouse, transferred to Ludlam Beach and exhibited the light for the first time on November 13, 1885. The lights characteristic was one flash every fifteen seconds produced by a revolving fourth-order Fresnel lens. The keepers dwelling was a wooden, one-and-a-half-story structure with a pitched roof. A square tower protruded from the ocean side of the roof and supported a lantern room whose base was roughly even with the peak of the roof. The dwelling was surrounded by a timber bulkhead, which was filled in with sand and gravel and graded to prevent the wash from high tides. All of this work, plus the land itself, cost $5,000.

In 1888, part of the back porch was enclosed to create a summer kitchen, and the lighthouses attic was floored, lined, and partitioned to create two rooms. At the same time, the dwellings cellar was paved with brick, and a picket fence was placed around the lighthouse reservation.

Having been constructed on the beach, the lighthouse was susceptible to flooding during violent storms. The Annual Report of the Lighthouse Board of 1890 recorded the effect of one such storm.

Much damage was done to this station by the storm of September [19], 1889, and the danger of its destruction was such that it became necessary to take out the illuminating apparatus [4th order Fresnel lens] and to abandon the light-house during the continuance of the storm [hurricane]. A new wooden sea-wall on the ocean front, with a return of 40 feet on each side, had just been completed and was not apparently hurt, but the old wall connecting with it and extending around the rear of the site, was broken on both its upper and lower sides, most of the filling was washed out and the upper and part of the rear and front foundation walls of the light-house and dwelling were undermined. The foundation walls were rebuilt and the chimney was underpinned. A new wooden sea-wall, extending across the rear of the light-house lot, with a return of 50 feet on each side connecting it with the wall on the front, was built and filled in with sand and a top dressing of gravel.

The lighthouses wooden seawall was replaced by a concrete one in 1907, but even it could not withstand the battering, storm-driven waves, as it was damaged during a severe storm in 1914. Fed up with the need for frequent repairs, Superintendent J.T. Yates of the Lighthouse Service wrote the following report to headquarters: This station is not a very important station and it is not considered that a great deal should be expended in protecting same, until more urgent cases have been cared for elsewhere.

A newspaper article in August 1904, reported the following observation made by Keeper Reeves:

Last Thanksgiving day the captain took a quantity of oysters to his home from an adjacent bay. The oysters were placed in a cellar, and in a few days all but half a dozen were used.

A short time ago, while passing through the cellar Reeves noticed the bivalves lying on the floor and decided to throw them away. But on picking one of them up he was astonished at its heaviness. He also noticed that the shell was tightly fastened. Prying the shell open with a knife he found that the oyster was not only alive, but in prime condition. Every one of the six were the same.

After thirty years at the lighthouse, Keeper Reeves retired in 1915 at the age of seventy.

It wouldnt be the ocean that sealed the fate of the lighthouse, but rather a keepers pet. On the night of November 21, 1923, the keepers pet knocked over a kerosene lamp that had been left burning in the kitchen. When the keeper realized the lighthouse was on fire, smoke in the hallway forced him to escape through his bedroom window. Unable to douse the flames with a fire extinguisher or the garden hose, the keeper ran to the nearby Coast Guard station for help.

By the time the fire was put out, the kitchen was lost along with a third of the roof. A temporary patch was applied to the roof, but it was torn away by a storm before permanent repairs could be made. Deemed uninhabitable, the dwelling was put on the auction block in 1924. The Seven Mile Beach Reporter carried the following notice: The old Sea Isle City lighthouse, which for 44 years guided mariners along the coast, will be abandoned and the building, one of the first on the island, will be dismantled and sold to the highest bidder for the material it contains.

An impersonal skeleton tower topped with a minor beacon replaced the historic lighthouse, which fortunately remained intact and was relocated to 31st Street and Landis Avenue. The appearance of the lighthouse was altered significantly through additions and the removal of the tower. In the 1940s, the lighthouse was moved to 3414 Landis Avenue, where it served as the upper portion of a six-unit summer rental. The skeletal tower served until it was dismantled following a storm that undermined the foundation on March 7, 1962.

Charles Adams, a Philadelphia school teacher who has owned the lighthouse since 1993, announced in 2006 that he would like to build a new structure on the half-million-dollar corner lot that currently brings in only a small fraction of what it could. In response to this announcement, Bob Uhrmann founded Friends of the Ludlams Beach Lighthouse to relocate, restore, and operate the lighthouse, which Adams said he is willing to donate to the group.

City Commissioner James Iannone envisioned the restored lighthouse as a way for the area to reclaim a part of its past. I think Sea Isle is starving for its history, and this is part of it. All we need to do is find a suitable location. In my point of view, the expense is not as much as the heritage its going to leave for the children. Ive watched a lot of old properties go down with a lot of character, and Sea Isle really needs some local point in terms of its history.

Visitors to the beach community passed the old lighthouse for years, ignorant of the colorful history the brightly colored residence had, but this changed on September 21, 2010, when the structure was torn down after sufficient funds could not be raised to relocate the lighthouse.

For a larger map of Ludlam Beach Lighthouse, click the lighthouse in the above map.

The lighthouse was demolished on September 21, 2010. From the Garden State Parkway take Sea Isle Boulevard (Highway 625) east to Sea Isle City. Turn left onto Landis Avenue, and the lighthouse would have been on your left on the corner of 35th Street.