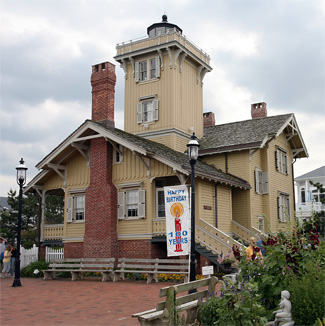 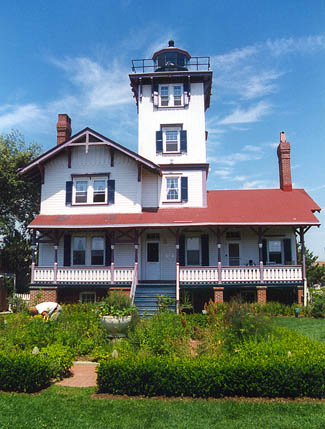 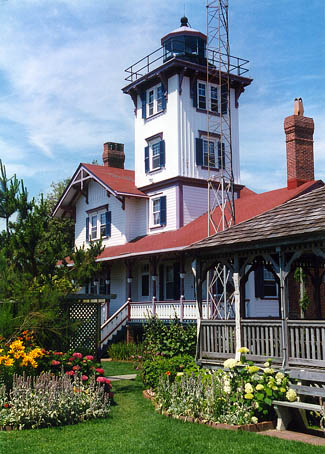 Just north of Cape May, a barrier island called Five Mile Beach parallels the New Jersey mainland. Separating Five Mile Beach from the next barrier island to the north is a small gap known as Hereford Inlet that leads to the calm waters found between the mainland and the islands. The Lifesaving Service selected the small village of Anglesea, situated on Five Mile Beach Island near the inlet, as a site for a station in 1849. Several years later, the Lighthouse Board, recognizing the merits of the location, included the following in their annual report: A small light, say a fourth order, is respectfully recommended for this place, as it would be of importance to the coal trade and to steamers navigating Delaware Bay and River, and to mark the entrance to the inlet, where there is a good harbor of refuge for small coasting vessels. Congress approved $25,000 for the light on June 10, 1872, and just over a year later a one-and-a-half-acre site on a dune overlooking the inlet was purchased from Humphrey S. Cresse for $150. Lt. Col. William F. Raynolds of the Army Corps of Engineers contracted with Hurst & Marshall of Philadelphia on October 8, 1873 to furnish the materials and labor necessary to completely construct and deliver (except the lantern, the parapet, the glass for the lantern, the lens, lamps, & furniture belonging thereto) a 4th Order Light House at Hereford Inlet, for the sum of $14,740.93. According to the contract, Hurst & Marshall would forfeit $10 for each day of delay beyond the target completion date of July 30, 1874. The motivated contractors completed the lighthouse on April 16, 1874, well before the deadline.

A Notice to Mariners announced the activation of the light on May 11, 1874, stating: The tower height is 49 ½ feet with the light elevation rising to 57 feet above sea level. The light is visible at a distance of at least 13 nautical miles.

The lighthouses Carpenter Gothic or Stick-Style design was the work of Paul J. Pelz, the Lighthouse Boards Chief Draftsman, who was also responsible for St. Augustine Lighthouse and the impressive Thomas Jefferson Building of the Library of Congress. Hereford Inlet Lighthouse is quite similar to Californias Point Fermin Lighthouse and East Brother Lighthouse, also designed by Pelz, and boasting five fireplaces, provided comfortable accommodations for the keeper and his family.

The first keeper to move into the livable lighthouse was John Marche, but after having served only three months, he drowned on August 9, 1874 when his boat capsized on a return trip from the mainland. John Nickerson filled in as keeper for a few weeks until Captain Freeling H. Hewitt, a veteran of the Civil War and former merchant seaman, could arrive to take charge of the light on September 28, 1874. Captain Hewitt invited the local fishermen and their families to the lighthouse for Baptist services, the first formal religious services held on Five Mile Beach Island, and the Sunday gatherings continued until a church was built on the island.

During Keeper Hewitts forty-five years at the lighthouse, he witnessed a hurricane and several storms of almost equal power. Storm surge accompanying the Gale of 1878 forced Hewitt and his frightened family to abandon the lighthouse, when the frothing sea lifted the structure from its block foundation. During a tropical storm that struck the island in September 1889, several Anglesea residents sought refuge in the lighthouse. Neighboring homes were destroyed or severely damaged, but the lighthouse stood resolute.

Captain Hewitt was forced to retire in 1919 at the age of seventy-five, and when he passed away four years later, he was interred at First Baptist Cemetery in Cape May Court House.

Several changes and improvements were made to Hereford Inlet Lighthouse through the years. On November 3, 1885, the lights characteristic was changed from fixed red to fixed white, with a dark panel covering shoals of Townsends Inlet. A detached brick oil house was built in 1897, and in 1899, the station received a new flagstaff, a telephone, and a set of signal code flags. In 1924, the original fourth-order fixed Fresnel lens used in Hereford Inlet Lighthouse was replaced by a revolving lens of the same order that produced a distinctive group flash signal of two flashes every fifteen seconds.

Water wasnt the only element that threatened the lighthouse over the years. Being constructed of wood, the keepers had to always be vigilant for fire. Keeper Ferdinand Heizman was busy painting the exterior of the lighthouse in 1938 when his task was interrupted by calls of Fire! from his wife Anna. A coastguardsman, likely from the station next door, noticed thick smoke emanating from one of the upstairs windows, called the fire department, and then alerted the occupants of the lighthouse to the imminent danger. Heizman grabbed an extinguisher and rushed upstairs to the burning bedroom only to be driven back by the extreme heat and thick smoke. Undaunted, he procured a ladder and equipped with a garden hose climbed to the second story and fought the fire through a window.

Thanks to the alert coastguardsman, Keeper Heizman was able to save the lighthouse and his family, though his hair was singed by the fire and the lighthouse sustained significant damage. An investigation determined that spontaneous combustion had started the fire in the bedroom closet.

The City of North Wildwood, which is still called Anglesea by some locals, signed a lease for the lighthouse on September 2, 1982 and immediately began restoring the building. The following summer, a portion of the lighthouse opened as the North Wildwood Tourist Information Center. The modern beacon was transferred from the metal tower to the lighthouses lantern room in 1986, and Hereford Inlet Lighthouse was once again performing its intended function.

The Hereford Inlet Lighthouse Commission, composed of volunteers appointed by the mayor and town council, now operates the lighthouse as a museum and gift shop. The second fourth-order Fresnel lens used at the station is on display in the lighthouse. In 2003, the lighthouse, which had previously been white with a reddish-brown trim, was painted a buff color. Some lighthouse enthusiasts were a bit appalled at the change, but when they learn that the color is historically accurate, they are usually appeased.

Thanks to the efforts of Steve Murray, Superintendent of Parks for North Wildwood, beautiful English cottage style gardens surround the lighthouse. The gardens, which have won awards and been featured in numerous publications, provide a tranquil setting for the historic lighthouse.

The Lighthouse Commission has ambitious plans for the area. They would like to lease the adjacent Coast Guard Station and develop a Historic Maritime Village. Given the wonderful job they have done with the lighthouse, one hopes the New Jersey Department of Environmental Protection, who owns the property, will have the foresight to support the plans.

The DCB-24 light in the lantern room, placed there in 1986 and operating on the property since 1964, had a rotating mechanism malfunction on Friday, May 11, 2018. As the cost for refurbishing this light, which had not been manufactured since 1986, would have been around $25,000, the Coast Guard installed a temporary, fixed LED lamp, visible at 15 nautical miles, while plans for a new rotating light were finalized. On July 19, 2018, the Coast Guard installed a new VRB-25 rotating light, visible at 18 nautical miles. The retired DCB-24 was placed on display in the lighthouse on August 7, 2018, joining the Fresnel lens that was already there.

For a larger map of Hereford Inlet Lighthouse, click the lighthouse in the above map.

From Garden State Parkway, take Exit 6 and follow Highway 147 (North Wildwood Boulevard) southeast 3.9 miles. The main road will become Spruce Avenue and then New Jersey Avenue along the way. In Wildwood, turn left onto Chestnut and drive two blocks to the light.

The lighthouse is owned by the New Jersey Department of Environmental Protection Division of Parks and Forestry and leased to the City of North Wildwood. Grounds open, dwelling/tower open in season.