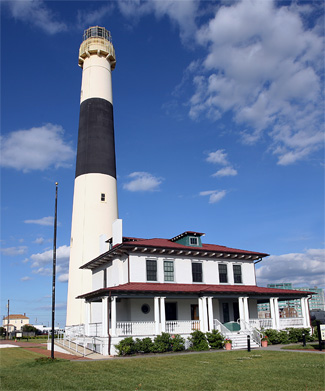 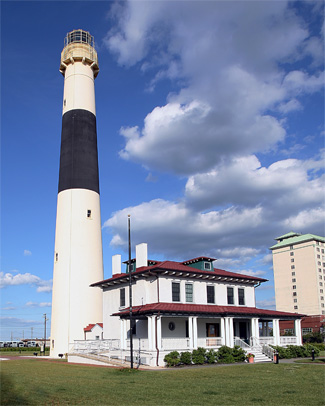 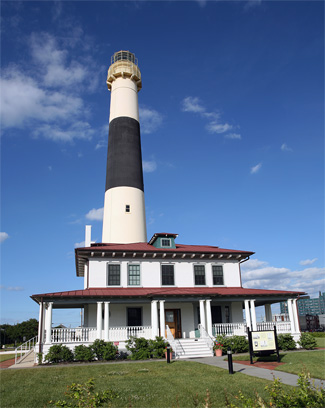 Seated atop a horse laden with saddlebags full of medical supplies and personal belongings, Dr. Jonathan Pitney arrived on Absecon Island in 1820. Pitney had just finished two years of employment at a hospital on Staten Island, following his graduation from medical school in New York City, and was looking for a place to make his mark. Touting the health benefits of fresh air and salt water, Dr. Pitney encouraged his friends and patients to vacation at Atlantic City.

To further promote his new home, Pitney petitioned the government in 1830 for a lighthouse on Absecon Island, and on March 3, 1837 Congress approved$5,000 for erecting a lighthouse near Absecon Inlet. Commander E.A.F Vallette was dispatched to the island to determine if a lighthouse was merited, and after examining the area along with the voluminous records prepared by Pitney, he concluded that a lighthouse was not justified as Absecon Inlet had a bar across its mouth and mariners could avoid the shoals in the area by staying a good distance offshore. Based on Vallettes feedback, construction of the lighthouse, which may have saved some of the sixty-four ships that were lost off the inlet between 1847 and 1856, was cancelled.

Still intent on developing the island, Pitney teamed with a civil engineer from Philadelphia to connect Atlantic City to Philadelphia via rail. The first train arrived on July 5th, 1854, and the annual influx of tourists to Atlantic City had begun. Pitney had not forgotten his earlier desire for a lighthouse and continued to write Congressmen, publish articles, and gather petitions. In 1854, his efforts paid off as Congress finally appropriated $35,000 for Absecon Lighthouse to serve as a coast light and to guide navigators clear of Absecon and Brigantine Shoals. For his contributions towards developing the island, Pitney is known today as the Father of Atlantic City.

A parcel of land located near Absecon Inlet was acquired for the lighthouse from the Camden & Atlantic Land Company for $520. Work on the lighthouse, which commenced in June 1855, was overseen by a succession of officers from the Armys Topographical Engineering Corps: Maj. Hartman Bache, Lt. George Meade, and Lt Col. William F. Raynolds. While Meade was supervising the construction, he complained: I am not aware on what data the amount appropriated for this work was based. There is no doubt, however, that it was entirely inadequate for a work of the magnitude now being erected. The place, though within forty miles of Philadelphia, is entirely without resources. There are no wharves or conveniences of any kind for landing materials or for handling them after landing. Hence, it resulted from a reliable calculation that transportation on the railroad was the most economical mode, notwithstanding its excess over ordinary water transport. While excavating an eight-foot-deep trench for the towers masonry foundation, water from the adjoining marshes would flood in requiring the purchase of a steam-engine-powered pump capable of removing 12,000 gallons per hour. Meade requested an additional $17,436.62 to complete the lighthouse, and this amount was provided on August 18, 1856.

Absecon Lighthouse was the first lighthouse built under the supervision of the new Lighthouse Board and was also the first of three similar towers that would be constructed in New Jersey in the next few years. The brick tower, which stands 171 feet high, was built with 598,634 bricks and contains a spiral staircase with 228 steps. A first-order Fresnel lens, manufactured in 1854 by L. Sautter & Cie of Paris, was installed in the lantern room and then lit for the first time on January 15, 1857. The Lighthouse Board proudly wrote: It is a fact worthy of remark that on this part of the coast of hitherto frequent and appalling shipwrecks, since the exhibition of this light, a period of about ten months, there have been no wrecks in its vicinity.

Though hard to imagine today, Absecon Lighthouse was for several years threatened by erosion. The lighthouse originally stood 1,300 feet from the water, but by 1864 the encroachment of the sea was causing considerable apprehension, and the taking of regular measurements was instituted to track the changing shoreline. In 1876, ordinary high tides were reaching the lighthouse lot, and extreme tides were covering a large portion of the reservation. Seven short jetties, covering the distance between low and high tides, were built in 1876 to trap sand and build up the shore, and a long jetty was added in 1878. These works proved so effective that in 1884 one hundred square feet of the lighthouse lot was used to build a lifesaving station.

Daniel Scull was the first of six head keepers who would serve at Absecon Lighthouse. The fourth head keeper, Abraham G. Wolf, made the following entry in the stations logbook at 9:52 p.m. on August 30, 1886, while he was standing watch. Felt a shock of earthquake while on top of tower. Pipes in closet rattled as if a gale of wind were blowing. The tower swayed so I could hardly keep my footing. The wind was north-northwest, very light, and it was cloudy and smoky both. Motion, north to south. Duration, about one minute. I was out on the gallery at the time. Came in and looked at the clock. Had difficulty in doing so. Could not have left it if I had wished to do so, and I think I did at the time.

Keeper Wolf called down to his wife, using a telephone of his own making that he had connected between the towers watchroom and the dwellings kitchen, and asked her if she had felt the shock. She replied in the negative, and told him that he must have experienced vertigo. When an assistant keeper came to relieve him at 10 p.m., Wolf showed him what he written in the logbook. Not having felt the quake, the assistant suggested to Wolf that such a record might place his sanity in question and that perhaps he should expunge it. Wolf was certain he had felt something, but could not find anyone at the station or even people living nearby to confirm his story. When the paper from Philadelphia arrived the next morning with an account of the earthquake, Keeper Wolfs story was substantiated, and his entry remained in the logbook.

Besides caring for the light and the property at the station, the keepers of Absecon Lighthouse also looked after throngs of visitors that came for tours. Climbing the tower was popular with the crowds as were the ornamental plantings on the grounds, which got an early jump on spring thanks to the stations greenhouse. The Lighthouse Service questioned why three keepers were needed at a station that lacked a revolving lens or fog signal, and an inspector, who visited the station in 1912, was asked if he didnt think it would be wise to reduce public visiting hours and cut one keeper. The inspector adamantly responded No, admitting that while giving tours could be a nuisance it also served as good public relations for the service since over 10,000 people a year were signing the visitors log. The Lighthouse Service, however, did order the greenhouse removed, and the countrys most visited lighthouse lost its impressive gardens. In 1922, the Lighthouse Service noted that Absecon Lighthouse was visited by the public more than any other lighthouse in the United States.

Absecon Lighthouse was Atlantic Citys tallest structure for several decades, but by the dawn of the twentieth century nearby buildings and hotels were obscuring the lighthouse. Mariners clamored for a new light, and on July 11, 1933, one was exhibited from atop a steel tower erected on the boardwalk near New Hampshire Avenue. Absecon Lighthouse was discontinued, and Keeper Knud Hanson, who arrived at the station in 1896 as second assistant and was made head keeper in 1914, retired at the age of sixty-six, though he did remain at the station as a caretaker for a period. The two keepers dwellings were demolished in the 1940s, and only Atlantic Citys agreement to take control of the lighthouse in 1946 saved the tower from the wrecking ball. The city managed the lighthouse until 1966, when they sold it to the State of New Jersey.

The brick lighthouse didnt receive its first coat of paint until 1871, when the tower was painted white with a central, fifty-two-foot red band. The towers daymark was changed in 1897 to orange with a black band to help mariners distinguish the lighthouse from the red-and-white Barnegat Lighthouse located several miles to the north. Chameleon-like, the lighthouse changed its official color scheme just a short time later to yellow-black-yellow as someone in authority found orange distasteful. After the lighthouse was deactivated and control was passed to the city, the tower was painted white-blue-white, the citys colors. The state restored the tower to its early white-red-white daymark after it purchased the lighthouse, but the tower now sports yellow-black-yellow, the daymark it had for the longest period of its active service.

In 1954, the lighthouse was lit to honor Atlantic Citys centennial and again in 1963 to celebrate the states tercentenary. The Atlantic City Coastal Museum opened the lighthouse to visitors in 1979. An effort aided by the Inlet Public/Private Association was launched in 1997 to rebuild the head keepers dwelling as it appeared after 1903, restore the lighthouse and lens, and reopen the station to the public once again. $2.75 million was raised, mostly through grants awarded by New Jersey Historic Trust and the states Transportation Enhancement Program, and the effort was progressing nicely until early in the morning of July 6, 1998, when a police officer on patrol noticed the nearly complete dwelling was on fire. The fire department responded quickly, but the dwelling was a complete loss. The lighthouse itself escaped without damage and was opened the following April.

An insurance policy allowed the work of rebuilding the dwelling to begin in the fall of 2000. The complete station was opened to the public in October 2001, and once again Absecon Lighthouse, New Jerseys tallest, is a beacon for tourists coming to enjoy the fresh air and salt water (and now the gambling) offered by Atlantic City.

Located in Atlantic City near the intersection of Pacific and Rhode Island Avenues.
Latitude: 39.36636, Longitude: -74.41417

For a larger map of Absecon Lighthouse, click the lighthouse in the above map.

From Garden State Parkway, take Exit 38 and go east on Atlantic City Expressway 7.5 miles to Atlantic City. Once in Atlantic City, turn left on Pacific Avenue and follow it for 1.3 miles to Rhode Island Avenue where you will see the lighthouse.

The lighthouse is owned by the New Jersey Department of Environmental Protection Division of Parks and Forestry. Grounds/dwelling/tower open.


Even though Absecon Lighthouse was deactivated years ago, it managed to keep its beautiful Fresnel lens. The original oil house is still standing too, but the ornate lifesaving station built on the lighthouse property in 1884 is no longer standing.