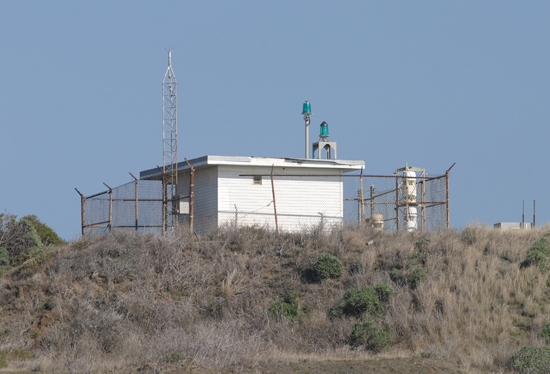 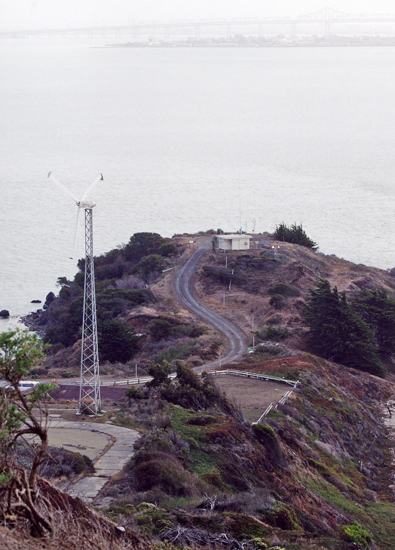 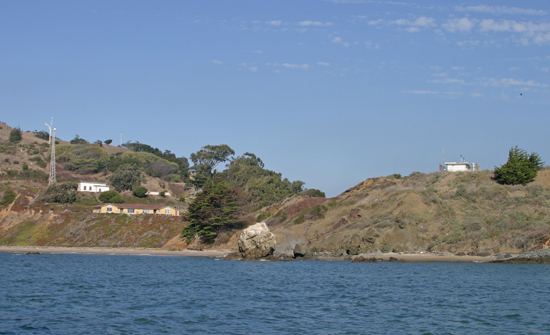 In 1775, Juan Manuel de Ayala became the first European navigator to sail into San Francisco Bay. He found a protected anchorage in a small cove on the northern side of the bay's largest island and promptly named the island "Isla de Nuestra Senora de Los Angeles" or in English, "Island of Our Lady of the Angels." The name stuck, though later shortened to simply Angel Island. Angel Island's cove, where passengers now disembark to visit the island, is called Ayala Cove in honor of the early explorer. As the number of vessels entering the bay increased, a fog bell was placed at Point Knox on the southwest side of Angel Island in 1886, and a light was added to the fog station in 1900. Still, Angel Island was too big an obstacle to be marked by a single light, and in 1915 lights were placed on Point Stuart, roughly a half mile north of Point Knox and at Point Blunt, the islands southeast extremity. The light at Point Stuart would serve to mark Raccoon Strait, which passed between the north side of the island and Tiburon, while Point Blunts light would guide vessels into the shipping lane that led north to the Sacramento and San Joaquin Rivers.

The wooden staircase leading down the rocky slope to the keepers dwelling at Point Knox had become unstable in the 1950s, and the decision was made to build a modern Coast Guard station at Point Blunt. Point Blunt would thus become home to the last manned lighthouse built in California, and interestingly it was located less than two miles from Alcatraz Island, where Californias first lighthouse once stood. A new flat-roofed structure, topped with a lens lantern and fog horn was built near the end of the point, with a similarly constructed watch building nearby. Four, three-bedroom, ranch-style quarters for the keepers and their families were placed farther up the point, and a concrete structure still higher on the point served as a paint locker. The station was completed in 1961, and the keepers at Point Knox moved into their new housing. The vacated dwelling and signal building at Point Knox were unceremoniously burned down in 1963, and the light there was discontinued.

As plans for automating the Point Blunt Station progressed, the Point Blunt Lighthouse was torn down, and the watch room building was outfitted with an automatic light and fog signal. Local mariners were notified by the Coast Guard that on June 28, 1976, the light would be automated and resident personnel would no longer be in attendance.

For a larger map of Point Blunt Lighthouse, click the lighthouse in the above map.

Angel Island State Park is easily reached via passenger ferry from Tiburon, San Francisco, and Alameda/Oakland. A museum, located in the bachelor officers quarters for the former Quarantine Station at Ayala Cove, is now a park museum that has on display the lens from Southampton Shoal Lighthouse, which was located 1.6 miles northeast of the island.

Once on the island, you can rent bicycles to circle the island, or a motorized tram tour is also available on select days. Point Blunt can be seen from the island's main road, but the grounds near the light are restricted.