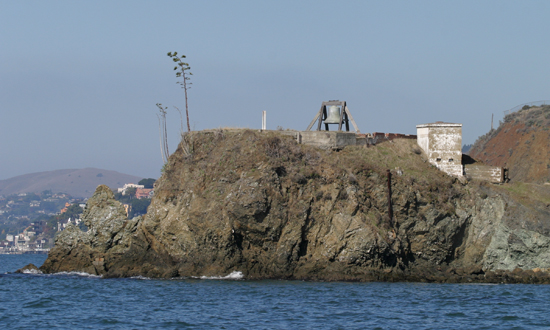 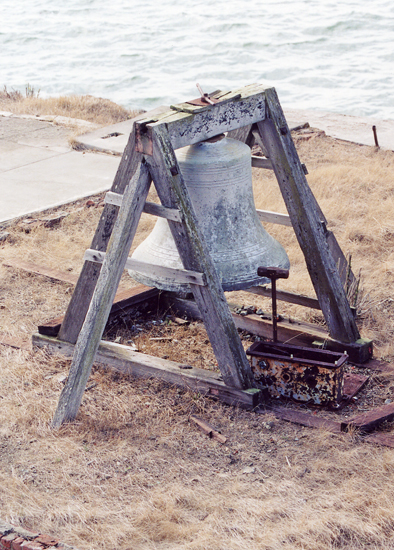 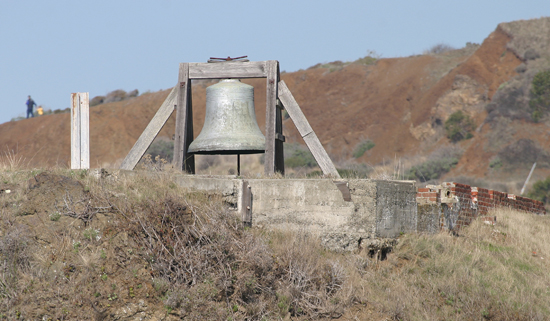 On top of a small, rocky outcropping, that extends from the southwest corner of Angel Island, sits a wooden frame in which a bell is suspended. The outcropping, known as Point Knox, lies at the base of a steep bluff and today is inaccessible. Few visitors to Angel Island, the largest island in San Francisco Bay, even notice the bell, which makes one question why the bell was left at the point. Was it simply because the 3,000-pound bell was too heavy to remove easily? Lighthouse enthusiasts prefer to believe that the bell was left as a tribute to a faithful keeper whose service at Point Knox Lighthouse has become legendary. On March 3, 1885, a sum of $4,500 was appropriated for the establishment of a fog bell at Point Knox to help vessels safely navigate the narrow channel in and out of Sausalito. Work on the island began in September 1885, and the following month the decision was made to use wood framing in place of iron columns to support the bell-house over the sea. Progress continued until violent winter storms destroyed the trail and steps up the bluff and inflicted other damage that made completing the station with the available funds impossible.

Congress appropriated an additional $550 on August 4, 1886, and work on the island resumed roughly two months later. The stations fog signal commenced operation on November 1, 1886 with a metal hammer, powered by a clockwork mechanism that required winding every two hours, being used to strike the bell a double-blow at fifteen-second intervals. Near the fog signal building and taking up most of the points surface was a thirty-foot-square, one-story keepers dwelling. Access to the main part of the island was via a series of 151 steps, which led up the steep bluff.

The stations first keeper was John Ross, who began his career in the Lighthouse Service on the East Coast. Ross accepted a position aboard the new lighthouse tender Shubrick, which left Philadelphia in 1857 and sailed around Cape Horn bound for its home port of San Francisco. En route, the ships coal supply ran out, and the crew was forced to burn furniture and the ships beautiful wood paneling to keep the boiler fires going. The Shubrick finally arrived in San Francisco on May 27, 1858.

In 1872, Ross was still serving aboard the Shubrick as she crossed the Columbia River bar towing a barge. The force placed on the towline by the strong current at the rivers mouth snapped the huge hawser sending one end recoiling toward the Shubrick. The line struck Ross in the leg, injuring him so severely that the limb required amputation. The accident brought Ross seagoing career to an end, forcing him to settle for a keeper position. Ross served as an assistant keeper at Point Hueneme and Piedras Blancas before being promoted to head keeper at Angel Island.

Ross, along with his wife and two children, faithfully tended the bell at Point Knox for sixteen years. In November 1900, his workload was augmented when a lens lantern was added to the station. Each night, the fixed red lens lantern was hung near the bell to serve as a minor aid to navigation.

When Ross retired in 1902, Juliet Fish Nichols received the appointment to replace him. Juliet was born in Shanghai, China in 1859 to Melancthon and Juliet Fish. Juliets mother died during the birth and her Aunt Emily, who was visiting at the time, married her brother-in-law and helped raise Juliet. The Fish family eventually settled in Oakland, where Juliet married Henry Nichols, an inspector for the twelfth lighthouse district. During his service, Nichols helped Emily Fish, whose husband had recently passed away, obtain the position of keeper at Point Pinos in 1893. Nichols died in the Philippines during the Spanish-American war, and his widowed wife, Juliet, was offered the position of keeper at Point Knox. Juliet and her mother served concurrently as keepers for twelve years, until they both retired in 1914.

It seems the machinery used to strike the fog bell was not the most reliable as it frequently broke down requiring Juliet to strike the bell by hand. Juliet noted at least eight failures of the striking mechanism in her logbook. The most notorious of these occurred on July 4, 1906. Juliet recorded the event: July 4 - Flags flying, calm, distant fog. After 7:00 p.m. dense fog banks, machinery striking. 8:00 p.m. machinery went to pieces  great tension bar broke in two  dense fog  fresh SW with heavy mist  bell struck with a nail hammer, standing out on the platform until 4p.m. [July 5]. Juliet later received special commendation for manually striking the prescribed characteristic of two blows every fifteen seconds for an amazing twenty hours and thirty-five minutes.

Additional fog signals and lens lanterns were placed on Angel Island at Point Blunt and Point Stuart in 1915 and added to the list of duties for the keeper at Point Knox. These remote-controlled stations consisted of a 500-watt incandescent lamp in a lens lantern and electric sirens. The Lighthouse Service Bulletin provided details on the new navigational aids:

The controlling station is located at the keepers dwelling, distant 1 mile from Point Stuart and 2 miles from Point Blunt. Current is supplied from an 11,000-volt, 3-phase, 60-cycle transmission line stepped down to 220 volts for the lights and sirens. The lights at each station are in duplicate, the spare lamp being automatically cut in should the service lamp burn out. The lamp circuit is opened and closed each day by a time switch. An arrangement of magneto relays in conjunction with a telephone enables the keeper at the control station to open and close the siren circuit and to listen to the operation of the fog signal through the medium of a single wire.

To make room for an assistant keeper, the original keepers dwelling was elevated and a second story was built underneath.

Theodore Sauer, accompanied by his wife Laura, served as keeper of Point Knox Lighthouse for nine years ending with his retirement on October 31, 1951, after more than thirty years of combined military and civilian service with the government. In appreciation for the Albert Gallatin Award that was presented by Rear Admiral R. T. McElligott upon Teds retirement, Keeper Sauer and his wife sent a thank-you letter that contained the following paragraph describing the couples attitude during their service.

Lighthouse living was not always easy. We often laughingly stated that Lighthouse keeping is not light housekeeping. It was a quiet life and at times monotonous but there is something about the lighthouse service that brings forth an intense sense of responsibility. Thus, thought of self interests were forgotten in the performance of whatever official demands were made. We realized early that loneliness was the greatest destroyer of contentment. We decided to combat loneliness by keeping alert for the interesting events of each day. There was always the beauty of scenic surroundings to enjoy. The sunsets at times were so inspiring that we were filled with awe at the majestic beauty of them. Then the sea, ever changing from calmness to turbulence, was always fascinating. The waves, which seemed at times to be doing a can-can with lacy petticoats as they danced along the shore, were a delight to watch. On clear nights, the stars reflecting their brilliance on the smooth sea, made us feel very close to our Supreme Admiral. No, loneliness was not a part of our living for there was always much to do and enjoy. Thus we were compensated with the peace that comes from striving to do our best.

Point Knox was automated by the Coast Guard in the early 1960s, and the station at Point Blunt assumed oversight for all operations on the island. The structures on Point Knox were intentionally burned to the ground in 1963, leaving behind just a lonely bell suspended in a wooden frame.

Over the years, Angel Island was used for more purposes than just aiding maritime navigation. An immigration station was established on the eastern side of the island in 1910 with the anticipation that it would become the Ellis Island of the West. In its thirty years of operation, the station processed tens of thousands of immigrants, primarily from Asia. One of the barracks from the station now serves as an immigration museum.

The Army also made good use of the island. Fort McDowell, which covered large areas of the island, was the largest staging facility on the west coast for the first and second world wars. Over 300,000 soldiers passed through Fort McDowell en route to the pacific theater during World War II. The fort also served as a discharge center for soldiers returning from war. Armaments were found on the island at different periods. Artillery batteries were placed on the southwest side of the island during the Civil War, and a Nike Missile site was located on the southeast corner of the island during the late 1950s. At Ayala Cove, where the ferry landing exists today, a quarantine station was active for several years. Ships arriving from foreign ports would stop here for possible fumigation of the ship or quarantining of the passengers if the vessel was suspected of carrying an infectious disease.

Located near the southwest end of Angel Island which is just offshore from Tiburon in San Francisco Bay.
Latitude: 37.85615, Longitude: -122.44242

For a larger map of Point Knox Lighthouse, click the lighthouse in the above map.

Angel Island State Park is easily reached via passenger ferry from Tiburon, San Francisco, and Alameda/Oakland. A museum, located in the bachelor officers quarters for the former Quarantine Station at Ayala Cove, is now a park museum that has on display the lens from Southampton Shoal Lighthouse, which was located 1.6 miles northeast of the island.

Once on the island, you can rent bicycles to circle the island, or a motorized tram tour is also available on select days. The remains of the Point Knox Lighthouse along with its fog bell can be seen from the main road on the west side of the island. Attempting to climb to the site would be quite dangerous and is probably not permitted.

A good way to see all the lighthouses of San Francisco Bay is aboard the Motor Launch Plover.

The grounds are owned by California State Parks and are part of Angel Island State Park. Grounds closed.


Renting bicycles to tour Angel Island is definitely the way to go in my book. The perimeter road is a bit hilly in spots, but you just have to swallow your pride, dismount, and push the bike for a couple hundred yards. A friend of mine (who shall remain nameless) took a spill within sight of the bike rental place, but I think that even she would say it was still a fun experience. The old structures on the island are testament to what a diverse role the island has played through the years.