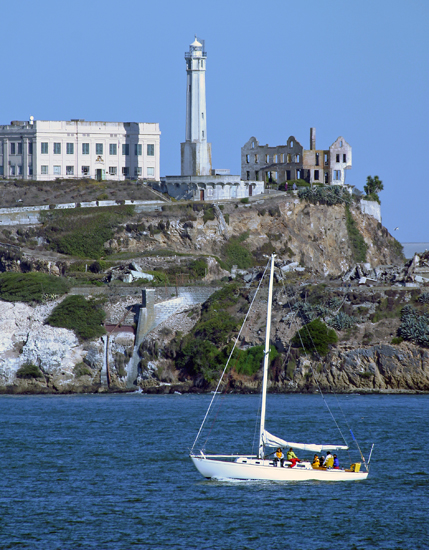 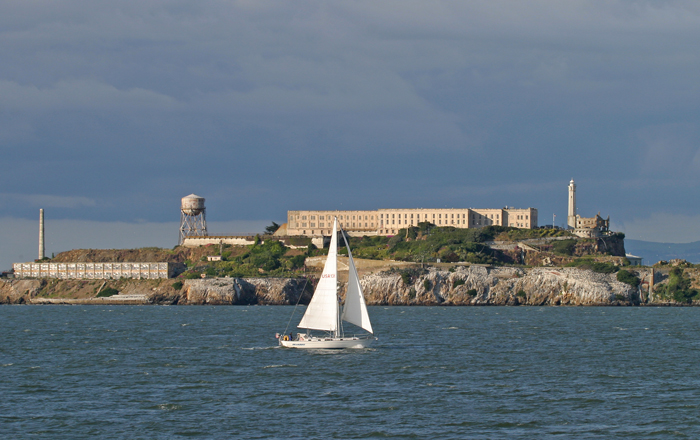 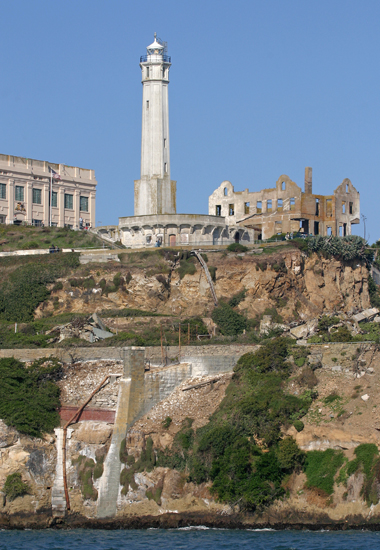 Prompted by the cry of Gold! at Sutter's Mill in 1848, thousands of fortune hunters set out from the East Coast and rounded Cape Horn on their way to San Francisco and the gold fields beyond. After several vessels experienced difficulty in the waters along the West Coast another cry was heard, this time for the construction of lighthouses to aid navigation. In response, Congress passed acts in 1850 and 1851 that provided funds for eight lighthouses to be built along the West Coast. The Baltimore firm of Gibbons and Kelly was awarded the contract to build seven lighthouses in California, at Alcatraz Island, Fort Point, Point Pinos, Point Conception, Point Loma, Southeast Farallon Island, and Humboldt Bay, and one at Cape Disappointment in present-day Washington. Supplies for construction of the lighthouses were shipped around Cape Horn on the bark Oriole, which arrived in San Francisco on January 29, 1853. An advance party had already started work on the foundation for Alcatraz Island Lighthouse, which would be the first lighthouse activated on the West Coast.

The plans for most of the eight lighthouses called for a one-and-a-half-story cottage, with a tower protruding through the center of its pitched roof. The steps in the tower thus provided access to the upper story of the dwelling as well as the lantern room. Alcatraz Island Lighthouse was completed by July 1853, but it would be almost a year before it would exhibit its light.

In 1852, the administration of U.S. lighthouses was transferred from the Fifth Auditor of the Treasury to a newly created Lighthouse Board, and one of the first changes made by this body was to order the installation of Fresnel lenses in all lighthouses. The thought before this time was that the Fresnel lens, developed by Augustin Fresnel in France in 1822, was too expensive for deployment in American lighthouses. The new Lighthouse Board concluded, however, that the superior performance of the Fresnel lens and the reduction in oil it promised more than justified the added expense. A change order was accordingly sent to Gibbons and Kelly directing them to not install the intended Argand lamps and parabolic reflectors but rather wait for a Fresnel lens to arrive.

Light from a fixed, third-order Fresnel lens was first shown from Alcatraz Lighthouse on June 1, 1854, with Michael Kassin receiving an annual salary of $1,100 as head keeper and John Sloan being paid $700 to serve as his assistant. The original lens had been in use for just under fifty years, when in 1902 it was removed and replaced by a revolving two-panel, fourth-order Fresnel lens, which produced a white flash every fifteen seconds. The district officers recommended the change in the lights characteristic so that it could be more readily distinguished from the electric lights surrounding it.

In addition to the light, the keepers on Alcatraz Island were also responsible for a fog bell, struck by machinery, which was placed on the southeast tip of the island. In 1883, the old bell and other material were sent to the Navy yard at Mare Island, and a 3,340-pound bell was cast for Alcatraz Island. The new bell was placed in a new structure, and, when conditions merited, it was struck five blows at intervals of ten seconds followed by a pause of twenty-five seconds.

Around the time the lighthouse was completed, military fortifications were also placed on the island. The Alcatraz Citadel, a multi-story fortified barracks, was finished in 1859 on the islands uppermost plateau just north of the lighthouse. The first use of Alcatraz as a prison came during the Civil War when thirty-nine people in San Francisco found celebrating the news of the assassination of President Lincoln were promptly arrested and locked up on the island for two months.

A second assistant keeper was assigned to Alcatraz in 1901, likely to help with the added burden of a revolving light and a second fog bell that was placed on the northwest tip of the island in 1900. The head keeper was given four rooms in the lighthouse, while the assistants had two rooms each and shared a kitchen.

Henry W. Young was serving as head keeper when the devastating 1906 earthquake struck San Francisco. The stations logbook for April 18, 1906 reads: 5:30 A.M. violent and continuous earthquake  San Francisco on fireis this the end of the world? Terrible seeing S.F. from here. The earthquake caused a slight crack in the lighthouse tower and toppled the chimneys protruding from the dwellings roof.

In 1909, the Citadel was razed, and the present cell house was built in its place. With its 600 cells, the new prison was reportedly the largest reinforced concrete building in the world at the time. As the new structure interfered with the operation of the lighthouse, a taller ninety-foot, concrete tower was built just south of the original lighthouse using $35,000 appropriated by Congress on March 4, 1909. Construction work began on July 20, 1909, and the revolving fourth-order lens transferred from the old lighthouse was activated atop the new tower on December 1, 1909. Attached to the base of the tower was a commodious dwelling with two two-story wings: the private smaller wing was for the head keeper and the two assistants shared the larger wing. No longer needed, the original lighthouse was torn down. By 1914, the fourth-order, two-panel Barbier and Benard Fresnel lens used in the lantern room had been replaced by a six-panel, fourth-order lens that produced a white flash every five seconds.

In 1913, the fog bells on the northern and southern extremes of the island were replaced with electric sirens. Interestingly, the prison guards helped the keepers operate the fog signals. From their elevated lookouts in the watch towers, the guards could easily see when a bank of fog started to roll through the Golden Gate, and they would notify the keepers who would activate the foghorns.

Alcatraz served as a military prison until it was acquired by the U.S. Justice Department in 1933 to serve as a federal penitentiary. The lighthouse keepers worked alongside the prison rather uneventfully until the light was automated on November 22, 1963. One dramatic event that was recorded by the keepers was a bloody escape attempt, known now as the Battle of Alcatraz.

On the afternoon of May 2, 1946, Bernard Coy, an inmate, was able to pry apart some bars and squeeze his greased body into an elevated walkway patrolled by armed guards. After overwhelming an unsuspecting guard, Coy gained access to firearms and keys, and quickly liberated his accomplices. The inmates plan soon met a snag, however, when they were unable to unlock the door leading to the recreation yard.

Marines were called in to help regain control of Cellblock D, located just 150 feet from the lighthouse, and over the next two days, gunfire was occasionally heard on the island. Harry Davis was serving as head keeper at the time, and it was likely he that penned the following account in the stations logbook: 1430 hrs Convict on the loose with submachine gun, entire prison held at bay. Shooting is almost continuous...U.S. Marines landed on north end of islandFire again raging in cell blocks...hand grenades being dropped through holes broken through the roof. The prison is being reduced to a shambles. When the nearly-two-day standoff was over, Davis wrote: "The end of 44 hours of living hell."

Three of the six escapees were killed during the battle, and two of the three who did survive were later executed together in the gas chamber at San Quentin for their role in the killing of two guards during the escape attempt. The third survivor was given an additional life sentence.

Edward Schneider, a genial 270-pound man, spent twenty-eight years on Alcatraz, not as prisoner, but as a keeper. Sure, I could have transferred to other stations. But anytime they asked me, I said no, Schneider told a reporter. This is one of the choice places. Not for them, I know, he said, nodding toward the barred windows. But for me Alcatraz isnt isolated. Its close to town.

Schneider arrived on The Rock as first assistant keeper in 1931 and retired in 1959 as the stations last civilian keeper. For many years, Schneider acted as Santa Claus to some seventy children of prison guards on the island, and he fit the role well, not needing a pillow or any extra padding. Besides the Battle of Alcatraz, another standout day on the island for Schneider was when both of the stations foghorns quit in a heavy fog and brought shipping in the bay to a stop. I never repaired anything so fast before or since, Schneider declared.

Upon his retirement, Schneider, who had divorced in 1942, went to live with a sister in Oakland. On October 17, 1967, Schneider ended his life by shooting himself in the head, leaving behind a suicide note that read: I cant stand the pain and I feel I am slowly becoming a burden.

Following the closing of the penitentiary in 1963, Alcatraz was declared surplus property. In November 1969, a group of about ninety Native Americans landed on the island and claimed it as Indian land. Over the next nineteen months, a varying number of Native Americans occupied the island. On June 1, 1970, a fire destroyed the wardens house, the keepers quarters and other buildings on the island, and scorched the lighthouse. Further damage was done to the island when the occupants reportedly began stripping copper wiring and tubing from the buildings and selling it as scrap metal. A pre-dawn raid on June 11, 1971 ended the occupation.

Today, only the tall cement tower equipped with a modern beacon stands as a reminder of the keepers who served on the island for over a hundred years. Alcatraz was declared a national recreational area in 1972 and made a National Historic Landmark in 1986. The National Park Service administers Alcatraz Island as a unit of the Golden Gate National Recreation Area.

For a larger map of Alcatraz Island Lighthouse, click the lighthouse in the above map.

Alcatraz Lighthouse is located atop the southern end of the island near the entrance to the prison. The interior of the tower is not typically open to visitors. A trip to Alcatraz can be arranged through Alcatraz Cruises either by using their website or by calling them at (415) 981-ROCK. It is strongly recommended that you purchase your tickets in advance.

The lighthouse is owned by the Coast Guard but is being transferred to the Golden Gate National Recreational Area. Grounds open, tower closed.


Alcatraz attracts throngs of visitors each day, and with its history that spans the Lighthouse Service, Military, and Bureau of Prisons, it is a worthy destination. Be sure and take the cell house audio tour and go early in the day so you have ample time to view the movie in the museum and wander around the island. As of 2004, the Fresnel lens used in the lighthouse is NOT on display in the museum as some lighthouse books say. It is currently in storage, but will hopefully be made part of an exhibit in the future.

As you leave the pier bound for Alcatraz, look for the Forbes Island Lighthouse, near the colony of sea lions on Pier 39.

With at least ten cameos, Alcatraz Island Lighthouse has appeared in more movies than any other U.S. lighthouse. These movies include: Birdman of Alcatraz, Escape from Alcatraz, So I Married an Axe Murderer, The Rock, and X-Men: The Last Stand.

This picture from 1910 shows a tide meter that helped mariners gauge the depth of the water near Alcatraz.


There is an amazing view of the SF bay from the lantern room, but it is difficult to obtain permission to enter the lighthouse. We made several calls with no success and decided to go tour Alcatraz anyway. It was simply luck and timing that we were able to go up in it while we were visiting the island.