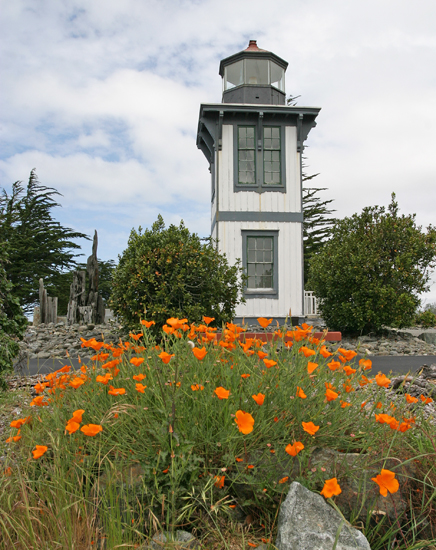 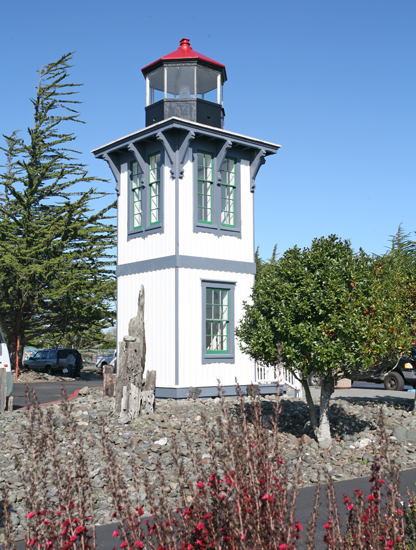 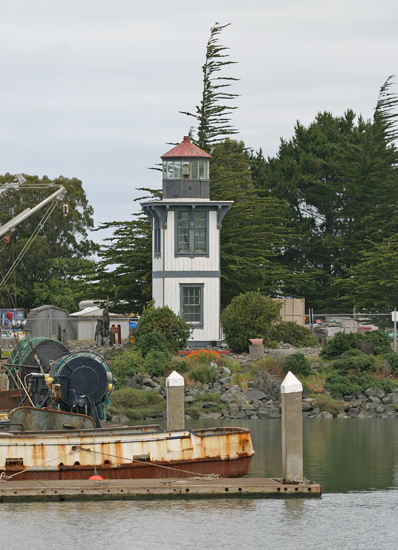 The first lighthouse to mark Humboldt Bay was completed in 1856 under the contract granted for construction of the first eight west coast lighthouses. A site for the tower was selected on the sandy northern spit near the entrance to the bay where it could serve as both a coastal light and a harbor light. Soon, however, the Lighthouse Board realized that the area was prone to flooding and was often obscured by fog. In 1867, the Board recommended that the light be relocated to 165-foot-high Table Bluff, four miles south of the bays entrance. From that prominence, the light would be able to serve mariners entering both Humboldt Bay and Eel River, located just south of the bluff. The necessary $25,000 for the new station on Table Bluff was not appropriated until 1891, even though Humboldt Harbor Lighthouse was deemed uninhabitable in 1885 after the structure had been jolted by a pair of earthquakes and flooded by an extraordinary high tide. On May 8, 1892, the inspector and engineer of the lighthouse district that encompassed California visited Table Bluff and selected a site for the station. Councilman W.S. Clark of Eureka, the owner of the land, refused to sell the desired ten-acre parcel and a right-of-way to the county road for less than $5,000, forcing the government, who felt the price was exorbitant, to initiate condemnation proceedings. The suit was later withdrawn when the two parties were able to agree on a price of $2,226.

Several newspapers notified interested parties that bids for constructing the light station would be received at the Lighthouse Service offices in San Francisco up until March 21, 1892. On this date, the bids were opened, and a contract for $16,949 was entered into with W.M. Wickersham of San Francisco for a tower and keepers dwelling, a double keepers dwelling, a fog-signal house, a coal shed, three wooden cisterns, three outhouses and the draining and grading of the grounds. A separate contract for $845 was awarded for a fourth-order lantern.

The station at Table Bluff was patterned after the one built in 1890 at San Luis Obispo, and just like there, the lighthouse, fog signal building, and duplex were lined up from north to south atop a lofty bluff. As the lens and fog signal equipment could be transferred from Humboldt Harbor to Table Bluff, the cost of the new station was half the cost of the one at San Luis Obispo.

On the evening of October 31, 1892, Head Keeper Tony Schmoll activated the fixed, fourth-order Fresnel lens at Table Bluff. Along with the lens and his two assistants, Charles F. Allen and Emil C. Parch, Schmoll had previously served at Humboldt Harbor Lighthouse. In 1911, a revolving fourth-order Fresnel lens was installed at Table Bluff, changing the stations light characteristic from fixed-white to a white flash every five seconds. The stations steam whistle emitted alternate blasts of four-second and eight-second duration, separated by silent intervals of twenty-four seconds, and when a vessel in distress was noticed, the whistle sounded five or six sharp blasts followed by a fifteen-second blast to alert the lifesaving crew at Humboldt Harbor.

The station atop Table Bluff was originally known as Humboldt Bay Light Station, but after a fog signal was re-established at Humboldt Harbor, the name of Table Bluff Light Station was eventually adopted to avoid confusion.

Stephen Pozanac was transferred with his wife from Año Nuevo to Table Bluff in 1922. Pozanac had become acquainted with the lighthouse keepers at Point Bonita when he was stationed at Fort Barry in Marin County during World War I and was so impressed with the lifestyle that he decided to become a keeper after the war. While on a ferryboat in San Francisco, Pozanac met Minie Diflivson, daughter of Peter Diflivson, keeper of Lime Point Lighthouse. Apparently Pozanac was also impressed by the daughters of lighthouses keepers as he asked Minie to be his wife.

The Pozanacs supplemented their keepers income by using part of the expansive lighthouse reservation to raise large quantities of chickens and vegetables. Soon, they were not only supplying eggs, fryers, and produce for the station, but also for a number of grocery stores in Eureka.

One night, Pozanac was making his way to his post in the fog signal building to stand watch when a strong tremor struck the station. The earthquake toppled the tall chimney on the fog signal building and sent it crashing through the roof. The pile of bricks landed right where Pozanac would have likely been standing watch had he reached the building. The fortunate Pozanac remained at Table Bluff until 1938, when he was transferred to Ballast Point Lighthouse, a twin of Table Bluff Lighthouse that was erected in 1890.

In 1935, electricity reached Table Bluff, and the tower and dwellings were wired for electric lights. Motor-driven compressors were installed in the fog signal building, and the signal was changed from a siren to a type F diaphone.

A wireless station was added to Table Bluff in 1906, and during the Second World War, the station also became home to a coastal lookout and radio station. A large barracks was built for single men along with six quarters for married couples. Horseback patrols would regularly cover the coast between the Eel River and the entrance to Humboldt Bay, keeping an eye out for enemy activities. This photograph shows twenty members of the beach patrol on horseback.

A small community lived atop the bluff during the war, but when the global conflict ended, only the keepers were needed at the station. The station thus had an excess of housing, and the Coast Guard decided to demolish the historic dwelling portion of the lighthouse and the keepers duplex in favor of the more modern housing. The wooden tower, separated from its supporting dwelling, had to be steadied by cables to prevent it from toppling over in high winds.

In 1953, Table Bluff Light Station was one of the first to be automated. A modern optic was installed in the tower, and the Fresnel lens was shipped to San Diego to be displayed at Old Point Loma Lighthouse. At that time, it was determined that the fog signal was no longer needed so it was discontinued.

Ken Smith, pastor of a Christian youth ministry near Eugene, Oregon, purchased the station in 1969 and renamed it Lighthouse Ranch, which he advertised as Seven acres of Gods earth dedicated to sharing the good news of a new life in Jesus the Christ as revealed in the Holy Scripture. The Coast Guard would visit the ranch periodically to service the light, until it was deactivated in 1971, after a new major light was established at the entrance to Humboldt Harbor. Jim Durkin bought Lighthouse Ranch from Smith in 1971, and soon there were over 200 hippies living at the commune and worshipping in the fog signal building, which had been converted into a chapel. Gospel Outreach was launched from the ranch and spread throughout the world. After Jim Durkin died in 1996, the ranch fell into disuse, and Gospel Outreach sold it to the state for $1.5 million in 2005.

Under the guidance of Ray Glavich, the abandoned two-story lighthouse on the ranch was cut in two and relocated to Eurekas Woodley Island Marina in 1987. The Fresnel lens has been retrieved from Old Point Loma Lighthouse and is now on display at Humboldt Bay Maritime Museum in Samoa (just outside Eureka). The museum also has the cupola from the original Humboldt Harbor Lighthouse, which was found in the sand on the northern spit in 1987.

The state donated the ranch to the Bureau of Land Management (BLM), and in 2012, the BLM awarded a $307,125 contract for the demolition of all remaining structures on the property including the original fog signal building, carpenter shop, oil house, and the foundation where the tower and dwelling once stood. Visitors can now experience the marvelous panoramic views afforded by the lofty setting at Table Bluff, but all of the stations historic structures are gone. Another surviving piece of Table Bluff Light Station is a fifty-seven-foot redwood water tower, which was dismantled and shipped to Piedras Blancas Lighthouse, where it has been rebuilt.

For a larger map of Table Bluff Lighthouse, click the lighthouse in the above map.

The tower from Table Bluff Lighthouse can be reached by going north on Highway 255 (R Street) from Highway 101 in Eureka. Once you cross the bridge, take the exit on Woodley Island and follow Startare Drive to its end where you will see the lighthouse located in the parking lot of Woodley Island Marina.

The lighthouse's Fresnel lens can be seen at the Humbolt Bay Maritime Museum located next to the Samoa Cookhouse. Phone: (707) 444-9440. The museum is open Thursday through Saturday, 11 a.m. - 4 p.m., year round and also on Tuesdays and Wednesdays, March 16 - November. Don't miss the Victorian Carson Mansion located in Eureka just across the harbor from Table Bluff Lighthouse.


While in Eureka, don't miss the spectacular Victorian Carson Mansion, (here are four pictures of it: 1, 2, 3, 4), and if you are looking for a good place to eat, try a meal served "Lumber Camp Style" at the Samoa Cookhouse.