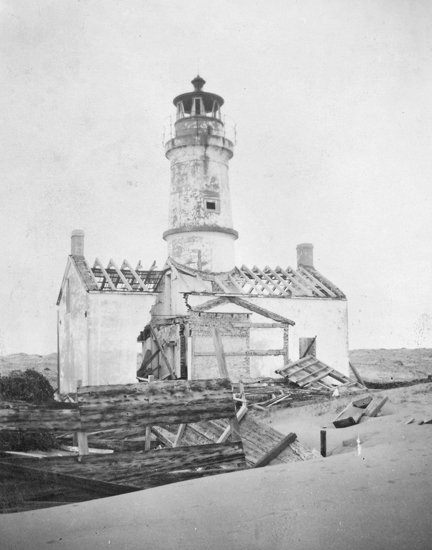 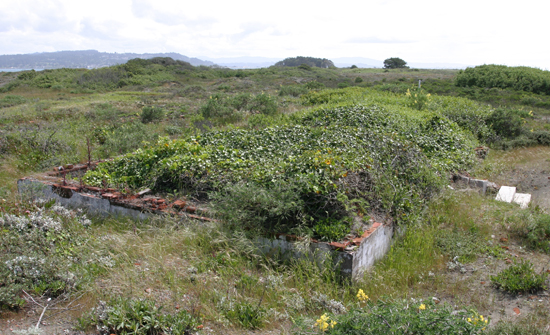 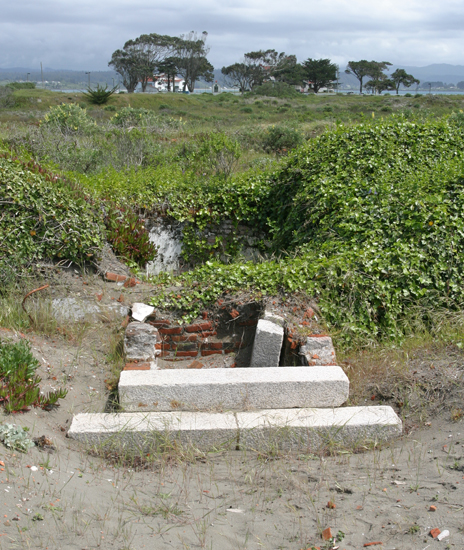 Humboldt Bay is the largest bay in California north of San Francisco. Two long thin spits separate the bay from the ocean, and a narrow opening between them provides the bays only entrance from the ocean. The town of Eureka was established along the shores of the northern portion of the bay in 1850, and just one year later, Humboldt Bay was chosen to receive one of the first eight lighthouses commissioned for the west coast.

The actual site selected for the light was a parcel of land on the spit just north of the bays entrance, where it could serve both as a harbor light and a seacoast light. The contract for the first west coast lighthouses was awarded to Gibbons and Kelly, and most of them were constructed using a design by Ammi B. Young that called for a one-and-a-half-story dwelling built around a central tower. While other similarly designed lighthouses were built atop high bluffs or hills, where a tall tower was not necessary, Humboldt Harbor Lighthouse was built on the beach. Old photographs of the lighthouse show a distinct circular ring at a height where the lantern room was placed on similar lighthouses, leading to speculation that at some point the tower of the Humboldt Bay Lighthouse was extended to increase its range, but the tower was tall from the beginning, giving the light a focal plane of fifty-three feet above the Pacific Ocean. Trapezoidal panes of glass were used in the lantern room, rather than the typical square panes.

On the evening of December 20, 1856, Keeper John Johnson climbed the winding stairs from the dwelling to the lantern room and lit the lamp in the fourth-order Fresnel lens for the first time, making Humboldt Harbor Lighthouse the last of the original eight west coast lights to become operational. Due to problems with contractors and difficulty in transporting supplies to the site, three of the second group of eight lighthouses commissioned for the west coast were actually completed before Humboldt Harbor Lighthouse.

Keeper Johnson reliably performed his duty for just over three years before his death on February 25, 1859. His wife, Sarah E. Johnson, took over the job of keeper and remained at the station until 1863.

The low-lying site selected for the lighthouse proved problematic and plans to relocate the light were soon formulated as noted in this excerpt from the 1867 Annual Report of the Lighthouse Board:

The breakwater of logs which was constructed last year seems to have answered the purpose of protecting the foundation of the structure, although the sand on the spit is constantly changing, and it is not improbable that the breakwater may at some future time be washed away and the stability of the lighthouse endangered. In this view of the case the board has under consideration the propriety of removing this light to a point about four miles south of the entrance to Humboldt Bay, known as Table Bluff.

Another reason noted for moving the light was the fog that frequently shrouded the spits and rendered the entrance light ineffective. In one year alone, over 1,100 hours of fog were noted at the entrance to Humboldt Bay, and in 1872, a bell boat was stationed off the entrance to the harbor to help mariners cross the bar in foggy weather. Funds for relocating the light were not immediately provided, but Congress allocated $10,000 on March 3, 1873 for a steam fog whistle on the north spit. The whistle commenced operation in May 1874, and the additional keeper required to staff the station was temporarily housed in a woodshed until a new dwelling was finished in 1877.

Earthquakes in 1877 and 1882 caused considerable damage to the lighthouse. For reinforcement, iron anchors were installed inside the walls and timber braces were placed around the exterior to prop up the dwelling. Part of the lighthouses south end wall, which had been cracked in the 1882 quake, was taken down and rebuilt. In February 1885, a cyclone inflicted additional damage to the station, partially unroofing the fog-signal shed and lighthouse, prostrating telegraph poles, and tearing up plank walkways.

The likely flooding of the station as predicted in the 1867 annual report did eventually happen, but not for roughly two decades, as noted in the report of 1886:

During an extraordinary high tide on November 24, 1885, a great quantity of driftwood swept across the north spit, upon which the lighthouse and fog signal stand, by which all the buildings were temporarily endangered. The cellar of the old dwelling and tower was filled with water, and a dangerous increase in its settlement and cracking of the walls was noted. Upon careful examination it was decided that the combined tower and dwelling was unsafe for occupancy. It was then decided in view of the proposed removal of the station to Humboldt [Table] Bluff, that a building should be put up for the temporary accommodation for the principal keeper, of such a character that it could be moved later across the bay to a new location and used as a fog signal shed, the existing one on the spit not being in good enough condition to warrant such removal.

The new residence was built for the principal keeper, but the light continued to be displayed from the original tower. In 1891, Congress finally approved the appropriation for a lighthouse and fog signal at Table Bluff, and the new station was completed the following year. Lens lanterns mounted on wooden frames were placed to mark the entrance to the harbor, and the Fresnel lens was transferred from the spit to Table Bluff Lighthouse, where it was placed in operation on Halloween of 1892. The fog signal equipment was also transferred to Table Bluff, allowing the new station to be built for just under $25,000.

Though heavily damaged over the years, the abandoned Humboldt Harbor Lighthouse remained standing for several decades. In the late 1890s, the lighthouse was occupied by U.S. War Department employees making improvements to the harbor entrance. A set of range lights and some harbor lights were established at Humboldt Bay in July 1897, after the entrance jetties were completed, and Henry Smith served as keeper of these lights for many years.

It was soon realized that a fog signal was still needed to mark the entrance to the bay, and an appropriation of $15,000 was requested in 1899. Congress failed to provide funds until June 1906, delaying the establishment of a fog signal station on the northern spit until 1908. Besides the fog signal building, the station also had two keepers dwellings. George D. Cobb was hired as the first keeper of the fog signal station, with Peter S. Admiral as an assistant.

On the morning of December 16, 1916, the USS H-3, an H-class submarine launched in 1913, ran aground in heavy fog while trying to enter Humboldt Bay. Keeper Cobb and Assistant Keeper Thomas Thomson were commended for helping the lifesaving crew rescue twenty-seven men from the stranded submarine using a breeches buoy. The Navy sent various vessels to try to pull the submarine back into deep water, but these efforts failed. The cruiser Milwaukee grounded in January 1917 during the attempted salvage operation and later broke up in the pounding surf.

The Navy requested bids to rescue the submarine and received an offer of $150,000 from the largest marine salvage firm on the west coast and an offer of $18,000 from a local lumber company. As the salvage firms bid was considered excessive, the Navy had no other option than to accept the lumber companys bid even though they felt their plan was unfeasible. During the spring of 1917, the lumber company used log rollers to move the submarine across the spit and were able to launch it in Humboldt Bay on April 20, 1917. The salvaged submarine served until being decommissioned in 1930.

The roof of the old Humboldt Harbor Lighthouse eventually collapsed, but the circular tower and portions of the exterior walls of the dwelling remained standing into the 1930s. Around 1933, the tower came crashing down, but just how is not exactly known. Rumor has it that a few of the coastguardsmen stationed nearby toppled the tower as a prank. Amazingly, the ruins of the lighthouse were left pretty much intact, and in 1987, the cupola that graced the top of the lantern room was found buried in the sand. The outline of the dwelling and tower and even the front steps of the lighthouse remain at the site today, surrounded by scores of weathered bricks. The area would be a prime candidate for an archaeological study by a college or historical society.

For a larger map of Humboldt Harbor Lighthouse, click the lighthouse in the above map.

From Highway 101 in Eureka, take 255 north to Samoa. When the road tees, turn left and continue south on the spit. Near the Coast Guard station, you will enter a park area. Follow the signs to the OHV staging area, park, walk across the road you entered on and look for a sign marking the Wetlands Hiking Trail. Follow the trail for just a short distance, and you will find the ruins.

The lighthouse's cupola can be seen at the Humbolt Bay Maritime Museum located next to the Samoa Cookhouse. Phone: (707) 444-9440. The museum is open Thursday through Saturday, 11 a.m. - 4 p.m., year round and also on Tuesdays and Wednesdays, March 16 - November.