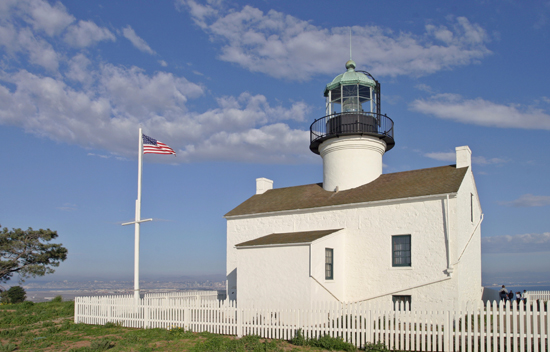 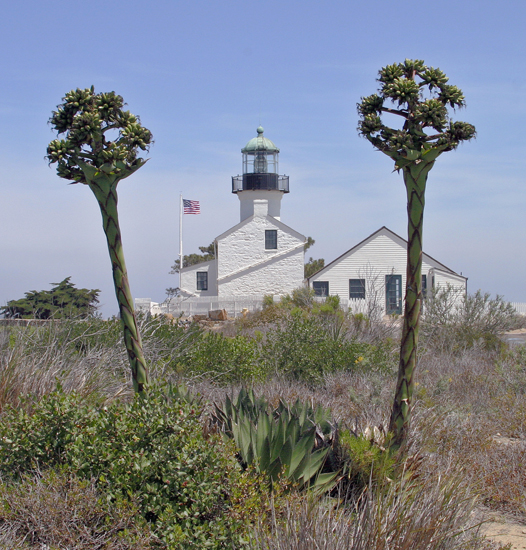 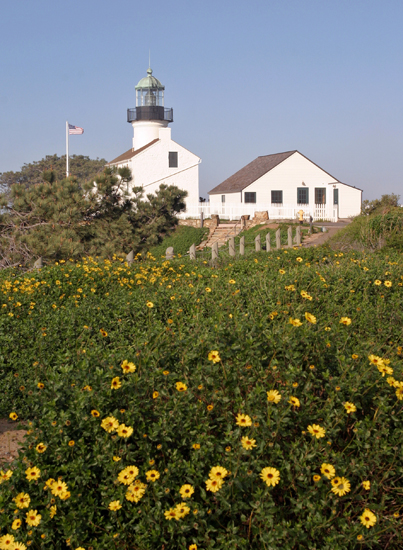 With the discovery of gold at Sutters Mill in 1848, ship traffic greatly increased on the west coast, prompting the construction of several lighthouses. Point Loma Lighthouse was one of the original group of eight west coast lighthouses, built under contract by the Baltimore firm of Gibbons and Kelly. Six of the original eight, including Point Loma Lighthouse, were built in the cape cod style, consisting of a one-and-a-half story dwelling with a central, spiral staircase leading up the tower to the lantern room perched atop the structure. The site selected for the lighthouse was the summit of Point Loma, a narrow finger of land forming the western boundary of San Diegos harbor and protecting it from the Pacific Ocean. On April 7, 1854, following the successful completion of lighthouses at Alcatraz Island, Fort Point, Point Pinos, and the Farallon Islands, the schooner Vaquero finally arrived in San Diego with the necessary building supplies for Point Loma Lighthouse. First, a road had to be constructed from the harbor to the top of the barren point. Sandstone for the dwelling was quarried on the point, while bricks were used to construct the tower, and tiles from the ruins of the old Spanish Fort Guijarros were used for the cellar floor. Water, needed for the mortar, had to be hauled from a well located seven miles from the site.

The lighthouse was completed by the end of August 1854, but delays in acquiring a suitable lens would postpone its first lighting for over a year. Point Loma Lighthouse was originally designed to house an Argand light, but before construction was completed, the Lighthouse Board had started to use the more efficient Fresnel lens, developed in France. The tower portion of the lighthouse had to be modified to house the Fresnel lens, and Harvey Ladd, who had arrived in San Diego a couple of years earlier with the Mormon Battalion, was hired as a mason for the rework. Finally, on November 15, 1855 the wicks of the lamp were lit, and the light from a third-order Fresnel lens shown out to sea for the first time, making Point Loma Lighthouse the fifth lighthouse activated on the west coast. The cost of the lighthouse had grown from the contracted sum of $15,000 to almost $30,000.

W. Jeff Gatewood, the first editor of the San Diego Union, provided an account of an excursion to the lighthouse in January 1869:

A short drive up the ridge brought us to the lighthouse upon the towering topmost height. A fence enclosing about an acre and a half surrounds it. Mr. Jenkins, the keeper, met us at the gate and escorted the ladies to the entrance where they were received by his wife. Neatness and order prevailed in the little enclosure. The flower beds surrounded by sulona [abalone] shells, the tidy walks and neatly arranged beds of cultivated earth told at a single glance the story of the taste and industry of these industrious inhabitants of this lonely tower. Beside the walls of the house some tomatoes were just ripening, while well-grown potato vines and other garden vegetables luxuriated in the genial sun and wooing breeze.

A principal keeper and an assistant were assigned to the station and had to share the four-room dwelling. In 1875, a barn was built near the lighthouse, and part of the oil and wood storehouse was converted into a two-room apartment for the assistant keeper. The sandstone walls of the lighthouse were left in a natural state, until by the 1870s deterioration was noted in the exposed stone. The southern and western walls, those most exposed to the onshore weather patterns, were covered with a heavy coat of cement-mortar followed by two coats of stone-colored paint. Later, all the walls would be covered, and in 1887 the lighthouse was given its now-familiar all-white look.

Acquiring sufficient water in the arid climate of San Diego was a problem for the early keepers. The basement of the lighthouse held a 1,240-gallon cistern, which through a series of pipes, collected the rain that fell on the roof. This small supply was inadequate for the station, and the keepers were forced to travel seven miles one-way to fill large barrels at the nearest well. A large, concrete catchment basin was built in 1882 on the east side of the lighthouse to feed rainwater into two subterranean cisterns, but in dry years, an occasional trip to the well was still necessary. The basin had a surface area of 2,900 square feet, which was sufficient to fill an 11,000-gallon cistern if roughly six inches of rain fell.

For many years, the lighthouse displayed a fixed white light, but with the growth of the city of San Diego other white lights were soon seen in the area and a more distinctive characteristic was needed. On April 1, 1889, the characteristic was changed to an alternating red and white flash with a one-minute interval between flashes. Rather than replace the fixed lens, flash panels, consisting of a pane of clear glass opposite a pane of red glass, were placed inside the lens and rotated using weight-driven clockworks.

At a height of 462 feet, Point Lomas light was the highest in the nation and was reportedly spotted by a ship thirty-nine miles at sea. This report must have actually been a reflection of the light from clouds as physics limits the distance at which a direct beam of light could be seen from Point Loma to under thirty miles. The lights lofty perch on the point meant it was often shrouded in fog, rendering it useless to mariners. On March 23, 1891, after just thirty-six years of service, Point Lomas light was extinguished, and the light from the newly constructed metal tower at the foot of Point Loma was first exhibited.

Robert Israel is the keeper most prominently associated with Point Loma. Originally from Pennsylvania, Robert joined the army during the Mexican War, and, after his service, settled in San Diego, where he married Maria Arcadia Machado de Alipas, a member of an old San Diego family. Keeper Israel served for twenty years at Old Point Loma Lighthouse and during three of those years his wife served as assistant keeper. When the light of the old lighthouse was extinguished in 1891, the Israel family moved to the new lighthouse, where Robert served as keeper for one year, before quitting after an argument with authorities.

After it was deactivated, the lighthouse soon fell into disrepair. Its windows were broken out, the lantern rooms metal roof was stripped off, and the basement was used as a comfort station. In 1913, the Order of Panama, a group dedicated to commemorating Californias Spanish heritage, proposed erecting a 150-foot-tall statue of Juan Rodriquez Cabrillo on Point Loma to honor his discovery of the area in 1542. The dilapidated lighthouse was to be torn down and replaced by the statue, but the Order of Panama dissolved before the monument was realized. As a result of the orders plan, one-half acre around the lighthouse was set aside as Cabrillo National Monument by Presidential Proclamation.

Cabrillo National Monument was turned over to the National Park Service in 1933, and by 1935 the metal lantern room had been rebuilt and the lighthouse restored to its original condition. A concessionaire lived in the lighthouse, offering tours of the building and operating a tearoom in the southern room on the main floor. With the outbreak of war in 1941, gun batteries and submarine spotters were placed on Point Lomas strategic summit. The lighthouse was painted camouflage green during the war, and was used as a signal tower to direct ships into San Diego Harbor. Ships approaching the harbor flashed a code, which if correct caused the submarine nets stretched across the harbors mouth to be lowered. After the war, the lighthouse was returned to the National Park Service.

In the early 1980s, the lighthouse was meticulously restored and filled with period furnishings to resemble its state when Robert Israel locked the lighthouse door and moved his family to the new lighthouse. The lantern room currently houses the third-order lens from Mile Rocks Lighthouse, near San Francisco. The visitors center at the monument has exhibits covering local marine life and Cabrillos discovery of San Diego Bay. The area around the lighthouse offers excellent views of San Diego Bay, San Diegos skyline, and grey whales making their annual migration to and from Baja California.

For a larger map of Point Loma (Old) Lighthouse, click the lighthouse in the above map.

From I-5 South or I-8 West, take the exit for Rosecrans Street, also known as Highway 209. Stay on Rosecrans for 2.9 miles to reach Point Loma, and then turn right onto Canon Street. Follow Canon Street 1.3 miles until it ends, and then take a left onto Catalina Boulevard and follow it for 3 miles to Cabrillo National Monument, which is open daily from 9 a.m. to 5 p.m. except on Thanksgiving and Christmas. There will be signs along the route.

Point Loma Lighthouse is open the same hours as the monument. Visitors can view displays on both floors of the lighthouse and peek up into the lantern room, but the lantern room gallery is only open to the public on November 15 (the anniversary of the first lighting) and August 25 (the birthday of the National Park Service). There is also a museum adjacent to the lighthouse in a replica of the assistant keeper's dwelling, where the Fresnel lenses from New Point Loma Lighthouse and Ballast Point Lighthouse are on display.


Old Point Loma Lighthouse appears in the movie "Antwone Fisher," when Antwone Fisher (Derek Luke), who is stationed on a ship in San Diego, takes his girlfriend up to the lighthouse.