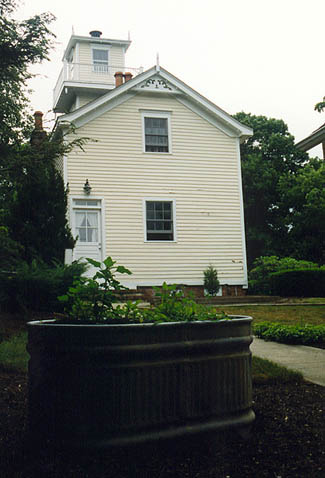 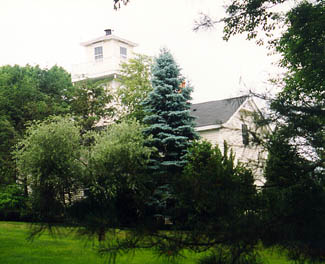 Richard Carlow Jr. was responsible for building several structures used to display range lights to help guide vessels into New York Harbor. These structures were described as three hexagonal towers, three keepers dwellings with light turret in the center, and three separate keepers dwellings, all of wood, upon foundations of brick laid in cement. One of these dwellings with a light turret centered on its pitched roof was Chapel Hill Rear Range Lighthouse, and two similar edifices served as Point Comfort Front Range in Keansburg, New Jersey, and New Dorp Rear Range Lighthouse on Staten Island, New York. Originally known as High Point, the neighborhood of Chapel Hill derives its present name from a small Baptist church built on the hill in 1809. The government purchased three acres on this hill from Timothy Mount in 1853, and three years later, the lighthouse was constructed and commenced shining the light from its forty-foot tower towards the bay below. Chapel Hill Lighthouse was paired with Conover Beacon, located 1.5 miles to the north on the beach in Leonardo. When these two lights were aligned, one above the other, mariners knew they were centered in Chapel Hill Channel that would safely lead them into Sandy Hook Bay. Due to the hill on which it was perched, Chapel Hill Beacon had a focal plane of 224 feet above the bay.

John Morrison received $400 per year as the first keeper of the lighthouse, and he served in this role for three years. Charles Carhart took charge of the light in 1869, and his tenure of thirty years at Chapel Hill was longer than any other keeper in the stations history.

As the dwelling and tower were painted white, the lighthouse could be hard to see during the winter, when snow blanketed the ground. To improve the visibility of the lighthouse, a black screen, about twenty-five feet high by forty feet long, was placed on each side of the lighthouse in 1874.

The stations outbuildings were blown down during a gale in 1871 but were quickly rebuilt. An oil house was added to the station in 1895.

As a safety measure during the Spanish-American War, Chapel Hill Lighthouse was darkened between April 28 and August 1, 1898. The intensity of the white light exhibited from the tower was increased on January 20, 1907, when the illuminant was changed from mineral oil to incandescent oil vapor.

Chapel Hill Lighthouse served until 1957, when it was replaced by a beacon atop a steel tower positioned 200 feet north of the lighthouse. An auction for the obsolete lighthouse was held by the General Services Administration in 1959, and Thomas Consorti, a Manhattan businessman, submitted the winning bid of $16,313. Consorti purchased the lighthouse as a Christmas present for his twenty-year-old son Peter, an amateur astronomer, to use as an observatory, and one must admit that the elevated walkway atop the lighthouse must have made a good platform for stargazing.

The lighthouse has had several owners since it was sold into public hands, but it remains in excellent condition. Decorative railings have been placed atop the front porch and along the roof peak, and ornamental spindles grace the four corners of the towers roof. The lighthouse has had an addition placed on its eastern end, as the brick chimneys marked the ends of the original lighthouse.

For a larger map of Chapel Hill Rear Range Lighthouse, click the lighthouse in the above map.

The light is now a private residence and located at the end of a long driveway making it very difficult to see. Please respect the owner's privacy. You can view the Barbier and Fenestre lens formerly used in Chapel Hill Lighthouse at Navesink Lighthouse.