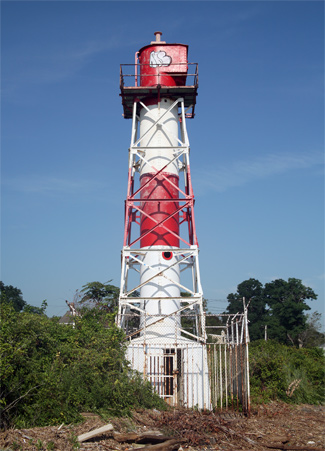 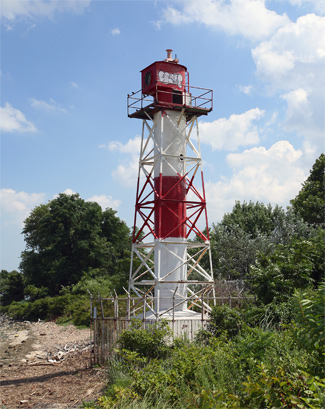 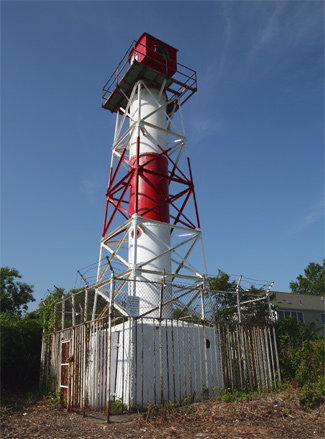 Conover Beacon, when aligned with Chapel Hill Rear Range Lighthouse that stands on a hill one-and-a-half mile to the south, served to guide vessels along Chapel Hill Channel, which runs from just off the tip of Sandy Hook south into Sandy Hook Bay towards the town of Leonardo. In 1852, Congress approved funding for the beacon to be established at Leonardo, and the following year, beachfront property was purchased from Rulif Conover, whose name would be applied to the finished tower. Richard Calrow, Jr. constructed both a hexagonal, wooden tower and a wooden keepers dwelling at the site in 1856, and the first keeper placed in charge of these structures was Marsh L. Mount, who earned an annual salary of $400.

The 1868 Annual Report of the Lighthouse Board carried the following on Conover Beacon:

The tower is very frail and shaky. Some three years ago it had become necessary to stay it by iron guys; the bottom timbers have decayed, and the tower has settled. The tower is higher than necessary, and the lantern is so small that it does not afford sufficient room in which to properly care for the illuminating apparatus. It is proposed to renew the timbers which have decayed, and to remove ten feet from the top of the tower, which will not only increase the room in the lantern, but render the tower itself much more stable.

Funds for altering the tower were authorized the following year, but before the work was carried out, the money reverted to the treasury. The tower was finally rebuilt in 1876.

The beacons original daymark was the same as that used today, a central red band on a white tower, but in 1874, black screens, measuring twenty-five feet high by twenty feet wide, were placed on either side of the tower on the recommendation of the board of pilots commissioners. When the shore surrounding the bay was blanketed with snow, the black screens made the tower more readily distinguishable for mariners. In 1901, the black daymark screens were rebuilt, their height increased to thirty feet, and their color changed from black to white with a diagonal black cross.

In his book, New Jersey Coast and Pines, Gustav Kobbe described the Conover Beacon as it appeared in 1889:

To one with an eye for the picturesque this graceful red and white tower, 55 feet high, on a low sandy point surrounded by a ledgea beautiful foreground against the blue sea beyondforms a very interesting combination of effects.

An oil house was added to the station in 1895, and the light was discontinued between April 28 and August 1, 1898 as a safety measure during the Spanish-American War. The intensity of the light was increased on January 20, 1907 by changing the illuminant from mineral oil to incandescent oil vapor.

The Conover/Chapel Hill Range Lights were discontinued in July 1923, when gas-lighted buoys were used to mark the channel formerly served by the range lights, but four months later, the range lights were reactivated as tugboat captains complained that the ranges were absolutely necessary to counteract the side drift of the current through the channels.

In November 1931, a concrete-block saw-tooth jetty was placed along the shore to protect the lighthouse reservation. The blocks were formed at the lighthouse depot on Staten Island and then trucked to Conover Beacon, where they were placed in position.

The current tower, which resembles a submarine periscope, replaced the hexagonal wooden tower in 1941. Before being relocated to Leonardo, the metal tower served as the front light of the Waackaack (way-cake) Range. The towers former location was just over four miles west along the shore at Point Comfort in Keansburg, where it was also known as the Point Comfort or Bayside Beacon.

Conover Beacon has been inactive since 1957, and its base is now protected by a chain-link fence topped with barbed wire. In 2004, the tower was transferred to Monmouth County for management by Middletown Township. The Friends of Conover Beacon Society has been formed to help restore the endangered tower, but the beacon still needs much attention.

For a larger map of Conover Beacon Lighthouse, click the lighthouse in the above map.

From Highway 36 in Leonardo, exit onto Leonard Avenue and go north about eight blocks to the shoreline, where the light will be on your right.


An informational sign near the Conover Beacon displays information on beach erosion. According to the sign, "erosion caused the Conover Range Lighthouse, formerly located to the east, to fall into the water." Groins have been placed perpendicular to the beach and the longshore current to still the water and allow the suspended sand particles to be deposited on Leonardo Beach. This preventive measure should protect the present inactive Conover Beacon from erosion. Who will maintain the beacon in the future is now the more critical question.