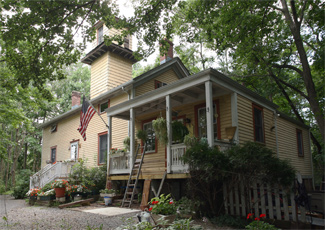 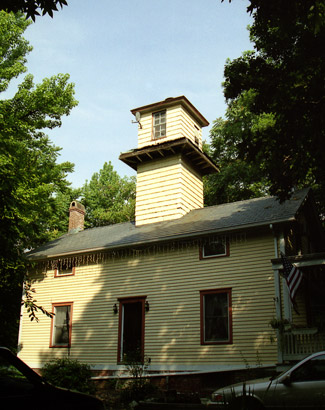 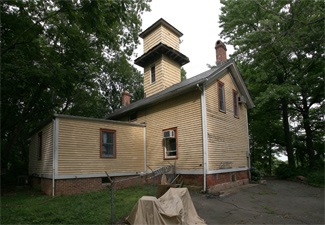 New Dorp, originally a Dutch settlement, has had its name anglicized from Nieuwe Dorp, Dutch for New Town. Perched on the hillside overlooking the community, which was home to members of the Vanderbilt family during the late nineteenth century, stands New Dorp Lighthouse, consisting of a short, square tower rising from the center of a one-and-a-half-story keepers dwelling. The panoramic view from the lantern room looks across Lower New York Bay to Sandy Hook, New Jersey, and while active, the towers beacon shined from 192 feet above sea level. In 1855, the Lighthouse Board reported on the progress being made on three ranges to mark Lower New York Bay, one of which was the range formed by Elm Tree Lighthouse and New Dorp Lighthouse.

Of these ranges there are three: one to guide vessels through the Swash channel [Elm Tree/New Dorp], another through Gedneys channel to Southwest spit [Point Comfort/Waackaack], and the third to guide vessels to and from the Narrows [Conover/Chapel Hill], requiring the construction of six light-houses, with three separate keepers dwellings, four of which are located in New Jersey and the other two on Staten Island. In accordance with the plans furnished for these by the Light-house Board in April last, a contract, dated June 11, 1855, was entered into with Richard Calrow, jr., of the city of New York, for the construction of these six range light beacons at the stipulated price of $19,124 for the whole, which included the construction of nine separate buildings in all, viz: Three hexagonal towers, three keepers dwellings, with light-turret in the centre, and three separate keepers dwellings, all of wood, upon foundations of brick laid in cement. The work to be completed on the 25th October, 1855.

When sailing through Swash Channel, mariners were instructed to bring the range lights in one and steer towards then until the lights at Chapel Hill came into view. This second pair of lights would then safely guide the vessel past West Bank.

The four-room keepers dwelling at New Dorp rested atop a brick foundation and was topped by a six-foot-square tower, that rose to a height of just over forty feet above the ground. John B. Fountain was appointed the first keeper of the lighthouse at an annual salary of $400, but he resigned after just a few months. Philip G. Bender, the next keeper, would mind the light for six years.

Today, a quiet residential neighborhood extends up the hill to the lighthouse from the south, but when the lighthouse was built, the Moravian Cemetery on its east side was its only neighbor, with the station otherwise surrounded by rugged forest. The governments right-of-way to the lighthouse was a tiny path leading through the trees that was not wide enough for a horse and wagon. Keepers had been allowed to use the road through the cemetery, but the authorities in charge of the cemetery rescinded that privilege in 1878. The Lighthouse Board gave the following description of their right-of-way to the lighthouse: This route, which has never been used, and only opened in part, lies through the woods, and has grades so steep that it is impossible for teams to reach the station that way with a load. For the next eleven years, Keeper John Langston had to carry supplies to the station in his arms or on horseback until the government finally agreed to cede its right-of-way property to the cemetery in exchange for access to its road.

In February 1896, Margaret J. Langston, the sixteen-year-old daughter of Keeper Langston, dropped dead on Staten Islands Richmond Road while returning to the lighthouse after attending church with her mother at St. Patricks Catholic Church. Young Margaret became fatigued while walking, and while taking a rest, she gave a groan and fell to the ground. She was carried into the house of a nearby doctor, but efforts to resuscitate her failed.

The original beacon at New Dorp was a second-order range lens showing a fixed light. The light source was changed from oil to incandescent oil vapor in 1907, greatly increasing the intensity of the light. A newspaper article in 1922, noted that the installation of an incandescent oil vapor lamp in New Dorp Lighthouse created phantom shadows, known as the New Dorp ghost, which were responsible for causing a mounted policemans horse to throw its rider.

In 1939, a sixth-order range lens was installed, still showing a fixed white light. At one time, there was a hole cut in the western side of the tower that may have allowed the keeper at New Dorp to see whether Staten Island Lighthouse was lit. An oil house was added to the station in 1903.

John R. Carlsson, a native of Finland, came to the United States as a young man in 1896 and joined the Lighthouse Service a year later. After stints aboard Sandy Hook Lightship and at Latimer Reef Lighthouse and Bergen Point Lighthouse, Carlsson was placed in charge of New Dorp Lighthouse. When Carlsson passed away in 1953 at the age of eighty-three, he was living just a few blocks away from New Dorp Lighthouse, which had been his home for over two decades. Captain Carlsson was a member of the New Dorp Moravian Church and was buried in the Moravian Cemetery, not far from his lighthouse.

New Dorp Lighthouse was abandoned and boarded up in 1964 after the range lights were replaced by offshore channel markers. John Vokral, a Staten Island resident, purchased the neglected and vandalized property at auction in 1974 for $32,000. It took a lot of work for Vokral to restore the tower. In his words, he sanded and painted every square inch of the clapboard himself, and hammered every peg into the old floors upstairs  all 1,286 of them.

There is no longer any beacon shining from the old lighthouse, but it has been restored to its original beauty. Besides the lighthouse, an oil house and barn remain on the property.

For a larger map of New Dorp Lighthouse, click the lighthouse in the above map.

From I-278 on Staten Island, take Exit 12 and proceed south on Slosson Avenue. Slosson Avenue will shortly become Todt Hill Road. Follow this road for two miles until it intersects Richmond Road. Continue south on Richmond Road for 0.3 miles. Turn right on Altamont Street, and then after four blocks left onto Beacon Avenue. Your first right will be Boyle Street, where you will find the light.