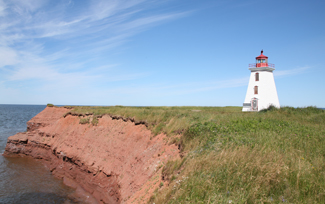 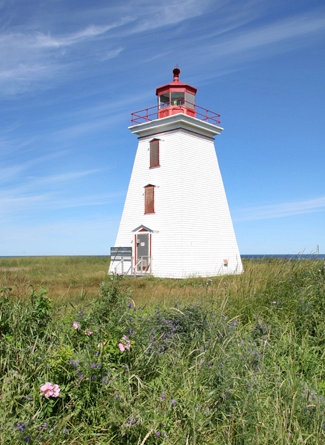 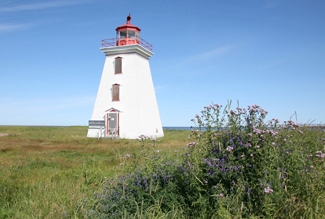 Parliament appropriated $2,500 in 1881 for the establishment of a lighthouse at Cape Egmont. Tenders were duly invited for the project, and the contract awarded to Laurent Perry, at $1,695, but owing to difficulties in obtaining the desired parcel of land, work on the lighthouse did not begin until 1883. Situated on the extreme point of Cape Egmont, 30 metres (100 feet) from its south and west banks, Cape Egmont Lighthouse was finally completed and put in operation in September of 1884, with Bruno Perry serving as its keeper at an annual salary of $200. The lighthouse, which overlooks Northumberland Strait on the southwest shore of Prince Edward Island, was valued by fishing and marine interests as it was the only beacon in the forty-six-mile-long dark expanse between the lighthouses at West Point and Seacow Head.

The square, pyramidal Cape Egmont Lighthouse is 12.4 metres (40.7 feet) in height from base to vane and built using the same design as the lighthouses at Wood Islands and Cape Bear. The shingled tower is enhanced by decorative details including pedimented windows and originally had an attached dwelling, which was removed in 1958 along with the stations oil house. A concrete foundation replaced the lighthouse's original rubblestone foundation in 1946.

The light in the towers octagonal iron lantern was initially fixed red, exhibited from a focal plane of 22 metres (72 feet), and could be seen, in clear weather, at a distance of ten miles from all points seaward. In 1891, the lamps, which had been suspended from a central shaft in the lantern room, were placed on shelves close to the lantern glass to reduce the interference to the light caused by the lantern sash bars. The array of lamps was replaced in 1906 by a single flashing fourth-order Fresnel lens, manufactured in Paris by Barbier, Benard & Turenne and consisting of six panels, each subtending sixty degrees in the horizontal plane. The lens was illuminated by petroleum vapour burned under a mantle and produced a white flash every six seconds.

Bruno Perry served as keeper until 1900, when F.C. Arseneault was appointed keeper. Joseph Gallant kept the light from 1902 to 1912 and was replaced by Edward J. Arsenault. Jean Wilfred Gallant, better known as Jack Ferdinand, and his wife, Marie Leonie (Richard), were in charge of the lighthouse from 1922 to 1950. Edward J. Arsenault was the last keeper of the lighthouse serving from 1950 until 1958, when the light was electrified. Keeper Arsenaults role then changed from keeper to caretaker, and his annual salary fell from $2,250 to just $150. The attached dwelling had been removed by the time this photograph was taken in 1965.

Due to severe shoreline erosion, the lighthouse was moved back from the surrounding bluffs in April, 2000. Cape Egmont Lighthouse currently has a signature of a two-second white flash, followed by an eclipse of three seconds.

Cape Egmont Lighthouse was recognized as a heritage place under the Prince Edward Island Heritage Places Protection Act on October 3, 2012. On September 25, 2013, the lighthouse was awarded a Provincial Designated Heritage Place plaque and certificate from the Honourable Minister of Tourism and Culture, Robert Henderson.

The Evangeline Tourism Association has petitioned for ownership under the Parks Canada Heritage Lighthouse Program.

For a larger map of Cape Egmont Lighthouse, click the lighthouse in the above map.


Cape Egmont features stunning red cliffs, though it is admittedly hard to get a good view of them unless you are offshore in a boat. There are, however, a couple of interesting formations that are readily visible.