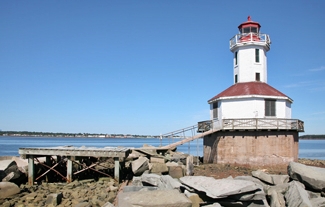 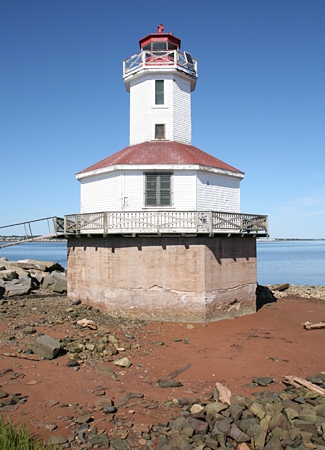 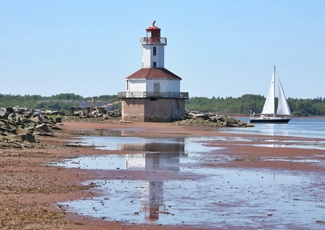 In 1878 Parliament appropriated $4,000 for the erection of a new lighthouse and pier at Indian Point, Summerside Harbour. A contract for the amount of $6,880 was awarded the following year to Richard Keeffe of Alberton and construction started on the project. Work continued through 1880, and Indian Point Lighthouse, now commonly known as Indian Head Lighthouse, was completed and put in operation for the opening of navigation in 1881. The lighthouse, which was established to guide vessels to the entrance of Summerside Harbour, originally consisted of an octagonal tower rising from the middle of a dwelling that rested on circular iron caisson whose foundation was below the low-water mark. The tower rose to a height of 12.8 metres (42 feet) and exhibited a white light to all points seaward and a red light between the bearings of N. N. E. ½ E. and N. E. ½ E. In 1882, the white portion of the light was modified to show white between Seacow Head and the most southerly point of Miscouche Shoals, which lie west of the lighthouse.

The dwelling portion of the lighthouse on the main floor was partitioned into three rooms: a storage room, kitchen, and a living room. A bedroom was believed to have been located above these rooms.

To protect the lighthouse, a breakwater was constructed by Ronald Campbell in 1884 under a contract for $3,950. Exposed to the wave action of Northumberland Strait and battered by ice floes each spring, the breakwater was frequently in need of repairs. Between 1887 and 1897, repairs to the breakwater were carried out at least seven times, and some of these fixes were described as extensive or large.

In consequence of shrinking and splitting, the siding on the lower portion of the lighthouse was removed in 1894, and a covering of tarred felt was applied followed by cedar shingles. Storm sashes were installed on all the tower windows, and the whole structure was given two coats of paint. H. P. Woods carried out this work, while the interior of the lantern was scraped and painted under the superintendence of Keeper James Walsh.

The first keeper of Indian Head Lighthouse was Captain Charles Peters, who came to Summerside in 1855 and sailed aboard many vessels owned by Jame C. Pope, a prominent citizen who as premier guided the islands transition from a colony to a province. Keeper Peters passed away in 1881 during the first season of the lights operation and was replaced by James Walsh. The early keepers of Indian Head Lighthouse received an annual salary of $300. From 1878 to 1882, James C. Pope served as Canada's Minister of Marine and Fisheries, and part of his responsibilities was overseeing the country's lighthouses.

During the spring thaw in 1897, a strong southwest wind drove large sections of ice over the breakwater, carrying away the stations boathouse and smashing the keepers rowboat. A new boat was hastily supplied at a cost of $30.

The lighthouses circular caisson foundation was replaced in 1907 by an octagonal cement foundation constructed under the supervision of the Department of Marine and Fisheries agency at Charlottetown at a total cost of $2,541.74. The following year, the illuminating apparatus at Indian Head Lighthouse was upgraded to a 270°, fourth-order Fresnel lens.

Following automation of the station, the partitioning walls in the dwelling were removed, and the tongue and groove wall boarding was torn out so leaks in the roof could be readily detected. Today, the signature of Indian Head Lighthouse is a five-second white light followed by five seconds of darkness.

Indian Head Lighthouse was recognized as a heritage place under the Prince Edward Island Heritage Places Protection Act on October 3, 2012. On September 25, 2013, the lighthouse was awarded a Provincial Designated Heritage Place plaque and certificate.

The City of Summerside has submitted a petition for ownership of the lighthouse under the Parks Canada Heritage Lighthouse Program.

Located at the end of the breakwater that extends from MacCallum's Point and forms the southern side of the harbour at Summerside.
Latitude: 46.3794, Longitude: -63.8169

For a larger map of Indian Head Lighthouse, click the lighthouse in the above map.

From Route 2 on the western side of Prince Edward Island just east of Summerside, turn south onto Route 1A and drive for 10 km (6.3 miles). Turn right onto Route 171 (Callbeck Street), and then after 1.9 km (1.2 miles) turn right on Route 112 towards Lower Bedeque. Follow Route 112 to its end where you will see Indian Head Lighthouse at the end of the breakwater. At low tide, it is possible to walk out to the lighthouse, but the breakwater is washed over at high tide.


Does anyone else find this sign a bit confusing? "NO UNAUTHORIZED ENTRY" and "ENTER AT OWN RISK" seem to be at odds to me, but I decided to just heed the lower portion of the sign.