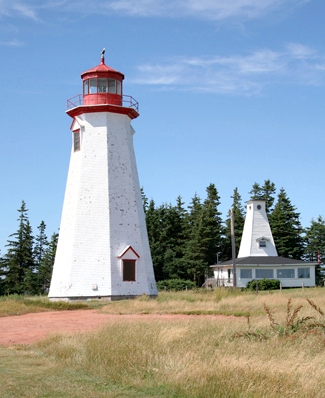 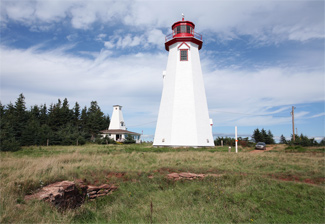 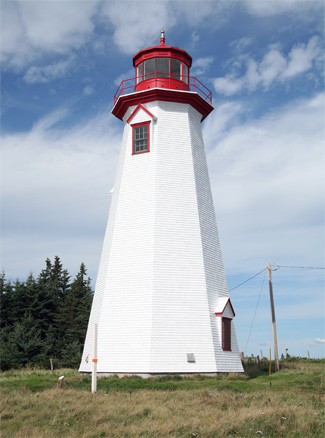 It comes as a bit of a surprise to most people that walruses, for which Seacow Head and Seacow Pond are named, were abundant on Prince Edward Island during the late 19th century. Seacow Head Lighthouse was built during the summer of 1864 under a contract of £314 by David McFarlane and John Rankin. Besides the cost of constructing the tower, £86 was paid for the land and right-of-way, Malcolm McFarlane was given £30 for clearing the land, Thomas Robinson was paid £85 for the lantern, and £300 was expended for copper, lamps, glass, and materials for the frame.

The octagonal, heavy-framed lighthouse, 18.3 metres (60 feet) in height and measuring 3.4 metres (11 feet 3 inches) on each side at the base, originally stood on a stone foundation and exhibited its light at a focal plane of about 27 meters (88 feet) above the surrounding water. Situated on the coast near the turning point for reaching Summerside Harbour, the Seacow Lighthouse serves as both a harbour light and a gulf light.

Malcolm McFarlane served as the first keeper of Seacow Head Lighthouse starting in 1865. In 1867, after McFarlane was no longer keeper, two commissioners were appointed by the House of Assembly of Prince Edward Island to investigate chargers against the former keeper. The commissioners found that the evidence presented to support a charge that McFarlane had embezzled public property were so trifling that it would not have been sustained in a court of law, and thus Keeper McFarlane was cleared.

In 1877, William Mitchell, the agent for the Department of Marine and Fisheries on Prince Edward Island, visited Seacow Lighthouse with the General Superintendent of Lighthouses of Canada and had five of Siblers patent lamps and burners, with deep reflectors, placed in the lantern room. At that time, the keeper, Peter ORonaghan, was living in the lighthouse, which was very uncomfortable, and Mitchell encouraged the Department to consider constructing a keepers dwelling. Tenders were invited for the construction of the requested dwelling in 1879, and a contract for the sum of $777 was awarded to James Barclay of Ellerslie. The new dwelling was built at the station in 1880.

A new cast-iron lantern was placed atop the tower in 1902 replacing a worn-out, inferior lantern. The tower was also reshingled, and a new platform deck built. In 1906, the system of lamps and reflectors was replaced by a fourth-order Fresnel lens, supplied by Barbier, Benard & Turenne, of Paris, France. The lens consisted of two groups of two panels each with each panel subtending 90° in the horizontal plane. Every ten seconds, the lens would produce the following pattern: flash of 0.638 seconds, short eclipse of 1.862 seconds, second flash of 0.638 seconds, and long eclipse of 6.862 seconds. The lens completed one revolution every twenty seconds, and petroleum vapour burned under a mantle was used as the illuminant.

Seacow Lighthouse was automated on November 12, 1959, and the dwelling was sold on March 7, 1960 and removed from the site. Charles Richards, the lights last official keeper, was transferred to Caribou Lighthouse in Nova Scotia, and William Sherry was hired at an annual salary of $150 to be caretaker of the automated lighthouse. For comparison, Keeper Richards was making $2,820 a year. The tower was moved back from the eroding bank in 1979.

Seacow Head Lighthouse was recognized as a heritage place under the Prince Edward Island Heritage Places Protection Act on October 3, 2012. On September 25, 2013, the lighthouse was awarded a Provincial Designated Heritage Place plaque and certificate.

When Tom Sherry, who owns the cottage adjacent to the lighthouse, learned the federal government was divesting Seacow Lighthouse, he visited his neighbors and obtained enough signatures to file an application for the structure. I went around to the residents of the community to see if there was enough local support, and 99 per cent of them signed the petition, said Sherry. Interested residents formed Friends of Seacow Lighthouse and submitted a business plan to the government. A public meeting was held at the lighthouse on July 18, 2013, and nearly the entire community of Fernwood showed up. Though some had questions about liability and maintenance costs, all were unanimous that the historic lighthouse should be saved.

For a larger map of Seacow Head Lighthouse, click the lighthouse in the above map.


Don't you think the structure atop the cottage next to the lighthouse looks like it might have been a range light? I thought that, but the lantern room portion didn't seem quite right. While I was visiting the lighthouse, the owner of the cottage just happened to drive up, and so I asked her what the origin of the upper portion of her cottage was. Turns out it was a lighthouse! But only a faux lighthouse that formerly stood on the grounds of an amusement known as Lobster Land that was located near Kensington.