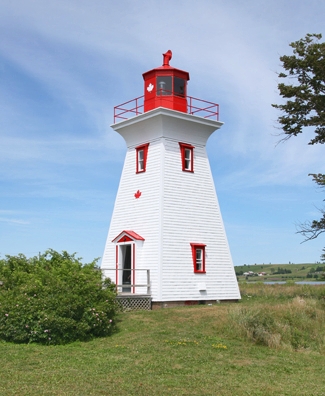 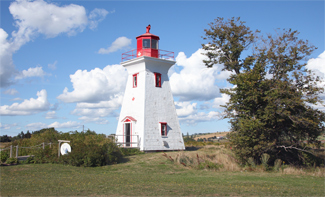 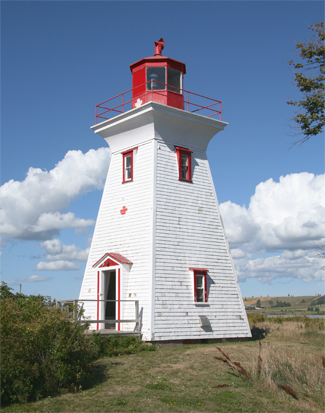 After Summerside, the village of Victoria, which was the outlet for a very fertile district, was the most important harbour on the southwestern side of Prince Edward Island in the early 1900s. At that time, Victoria Harbour had a 486-foot-long pier and was serviced weekly by a steamer from Charlottetown.

In 1894, two new sets of range lights, the Palmer Range and Wrights Range, were established to work in conjunction with the existing Leards Range Lights to guide mariners into Victoria Harbour, also known as Crapaud Harbour. The following set of instructions was published for mariners to help them use the three pairs of range lights.

To enter Crapaud (Victoria) Harbour from the Strait of Northumberland, vessels should bring the two old lights (which will be known hereafter as Leards range, and which are both fixed white) into alignment and kept them in one on a north course until the lights of Wrights range are in alignment when they should follow this range N.W. ¼ N. until the red light on Palmers wharf is in alignment with the front light on Leards range. These two in one will lead in from the black buoy at the entrance to the dredged cut, to the wharfs, N. N. E., but strangers entering at night are advised to anchor in the road at this last described turning point near the black buoy, as they will be in good anchorage inside the shelter of Tryon shoals, while it is not safe to attempt the dredged cut at night.

A year after Prince Edward Island joined the Confederation of the Dominion of Canada in 1873, the General Superintendent of Lighthouses visited the island to assess the status of its lighthouses. At that time, the light at Victoria Harbour, then known as Crapaud, was just a lamp raised on a pole with guide rods that was being tended by Donald W. Palmer. This light was erected in 1869 by George Clark, who received £10 granted by the island's government the previous year. A new lantern and reflector were provided to the station in 1873, and range lights for the harbour were recommended in 1876.

The Leards Range Lights were established in 1879 when Donald W. Palmer was given $75 for land for the front light and James Barclay was paid $535 under contract to build a small tower. The front range light is currently housed in a white, square, pyramidal tower, standing 10.7 meters (35 feet) tall, which formerly had a red diamond on its seaward face. Percy Palmer became keeper of the single light at Victoria in 1875 and watched over the front range light from the time it was established until 1889.

S. J. B. Leard was the first keeper of the Leards Rear Range Light, which is not surprising as the beacon was displayed from a mast attached to his home. In 1895, the mast was relocated to the keepers garden as the strain on the mast during gales was damaging the keepers dwelling. At the time of the passing of Keeper Leard in 1901, the rear light was being shown from a dormer window in his home. The light was subsequently transferred to a tower erected 61 metres (200 feet) north of the house along the same range line, and the day beacon shown above the ridge of Keeper Leards home was taken down.

The rear range tower was a square, pyramidal, open skeleton structure surmounted by an enclosed square lantern room from which showed a fixed white light at an elevation of 29 metres (95 feet). The tower was 14 meters (46 feet) tall from its base to the top of the ventilator on the lantern and had its side facing the range light cover with slats to forma day beacon. The rear tower has since been enclosed. Both Leards Range Lighthouses now have a vertical red stripe painted on their seaward face, and the towers are separated by 851.8 metres (2,795 feet).

The Palmer Range Lights were temporarily discontinued in May 2008 as the channel had silted up. The lights were reactivated the following spring but have since been discontinued.

Abner J. Howatt was appointed keeper of the Leards Front Range Light on July 22, 1893, and James Inman received an appointment to be keeper of Leards Rear Range Light on August 13, 1901. Both keepers were making $100 per year.

Emerson MacDonald retired as keeper of the range lights in 1960 at an annual salary of $615, and Albert Trowsdale was then appointed caretaker of the automated lights at $200 per year.

Since 1990, the Leards Range Front Lighthouse has been operated as the Victoria Seaport Museum during the summer. Visitors are allowed to climb a ladder to the lantern, where they can get a good view of Victoria Harbour and a unique feature of the tower - its two lights. The museum has information on the harbour's three sets of range lights and the keeper's who were responsible for them. Other displays cover the history of the village and several of its historical buildings.

Leards Range was discontinued by the Coast Guard in 2011, but the front light remains active as Victoria Harbour Lighthouse.

Leard's Front Range Light was recognized as a heritage place under the Prince Edward Island Heritage Places Protection Act on October 3, 2012. On September 25, 2013, the lighthouse was awarded a Provincial Designated Heritage Place plaque and certificate.

For a larger map of Leards Range Front Lighthouse, click the lighthouse in the above map.

From Highway 1, roughly 19 km (12 miles) east of Confederation Bridge, exit south towards Victoria, following Nelson Street. When Nelson Street ends, turn left onto Water Street, and continue to Leards Range Front Lighthouse. Victoria Seaport Museum is housed in the lighthouse and is open during the summer months from 10 a.m. to 5 p.m., Tuesday through Sunday. If the tower happens to be closed, check with the friendly owner of the candle shop just across the street.

The lighthouse is owned by the Village of Victoria. Grounds open, tower closed.