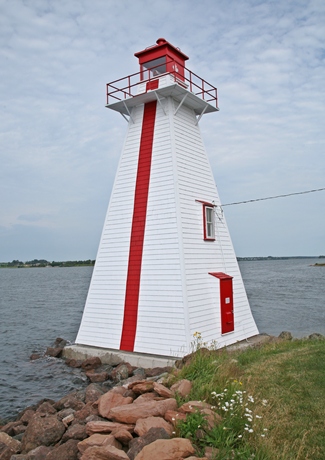 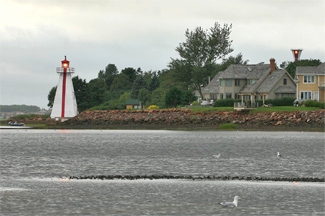 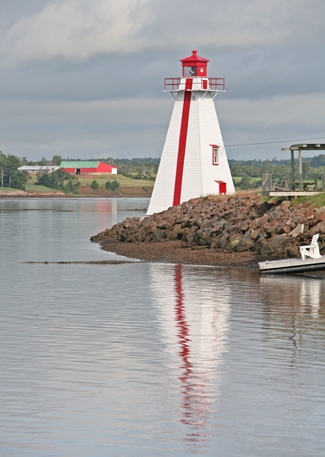 Construction began on the first set of Brighton Beach Range Lights in 1889, and the beacons were put into operation on the opening of general navigation in 1890. A second pair of range lights was established on Haszards farm at the same time, and together these two sets of lights helped mariners navigate a thirty-foot channel through Hillsboro Bay and into Charlottetown Harbour. Located on the east side of the North River in Charlottetown Harbour, the Brighton Beach Range Lights were originally both fixed-red and shown from reflector lanterns hoisted atop a mast. A shed was located at the foot of the masts, and diamond-shaped slat-work was mounted on each of the masts to serve as a daymark. The front mast was 12.2 metres (40 feet) tall and was located on the northwest corner of the breakwater on the Honorable G. W. Howlan's property. The rear mast was 12.8 metres (42 feet) tall and was located on the old asylum grounds, 389 metres (1,275 feet) due north of the front light. James Galvin was appointed first keeper of the lights at an annual salary of $100.

The mast lights were replaced in 1892 by "skeleton towers" built under contract by James Hanrahan for $383.90 The upper parts of both towers were enclosed and surmounted by wooden lanterns that contained a catoptric illuminating apparatus. The sides of the towers facing the range line were slatted to make conspicuous daymarks. The front tower was 12.2 metres (40 feet) tall, and the rear tower 15.2 metres (50 feet). The towers were painted white, with the lantern rooms brown.

In 1895, a twenty-foot-tall red diamond was painted on the side of both the front and rear towers that faced the channel to render them more conspicuous as day beacons. The lanterns were also painted red at that time. The red diamonds were in place until at least the 1950s, but today, a vertical red stripe serves as daymarkers on the towers and helps mariners align the two structures.

Following the passing of James Galvin, James Lewis was appointed keeper of the Brighton Beach Range Lights on March 1, 1899 at an annual salary of $100. The family of Keeper Galvin was given a gratuity in the form of two months of the keepers salary ($16.66).

The rear tower was blown over during a heavy gale on October 11, 1900, forcing a temporary light to be shown from a lantern hoisted between two poles.

A new cribwork foundation, twenty-feet square and consisting of seven tiers of hemlock timber, was built for the front range tower in 1907. A ballast floor was placed between the third and fourth tier allowing the top portion of the cribwork to be filled with ballast stone. The work was performed by day laborers and cost $139.86. The front range light was moved to a new site in 1919 and again in 1926, when a new concrete foundation was built for it.

Brighton Beach Range Lights did not escape the notice of Lucy Maude Montgomery, Prince Edward Islands most famous author, when she vacationed at the Brighton Shore in 1923. Montgomery wrote the following to her pen pal George McMillan in a letter dated September 3, 1924. My first week was spent with an old college chum in her summer bungalow on the south side, built just where the North River empties into Hillsborough Bay. It was situated between two range lights that burned enchantingly through the twilights, pearl white against the ethereal skies. Down the harbor there were more rangelights and far out, seemingly in mid-harbor, shone the far away lighthouse on Point Prim  a beacon in fairylands forlorn.

The wooden tower that exhibited the rear range light was destroyed by fire around 1930.

John Francis Duffy, the last keeper of the range, retired in 1952 when the lights were electrified, and A.A. LeClair was appointed caretaker of the lights at an annual salary of $50.

The current Brighton Beach Rear Range Lighthouse is the only one of its design on Prince Edward Island and was completed on December 24, 1968 by Williams, Murphy and MacLeod. This octagonal style of tower is nicknamed the apple-core design. The concrete tower is 18.4 metres (60.4 feet) tall, is equipped with a spiral staircase, and has four vertical windows placed one above the other on its landward face. The Rear Range Light is located 398 metres (1,306 feet) from the Front Range Light.

In the winter of 2000, the Brighton Beach Front Range Light was severely damaged in a storm surge. The top 6 metres (20 feet) of the tower were cut off and placed in a nearby yard, while the bottom portion was removed and rebuilt.

In 2009, the Canadian Coast Guard proposed the following modifications to the front tower: 1) a 1.5-metre-tall slab of concrete be placed under the front tower to protect it from ice damage, 2) the tower be reduced in height to compensate for the slab, 3) the tower be covered with vinyl siding, and 4) the deck and railing around the lantern be replaced. Charlottetown's city council rejected the proposal arguing that the alterations would compromise the historical integrity of the structure. The $250,000 set aside for the project was forfeited, and new money will have to be obtained when a new restoration plan is agreed upon.

During its June 2012 public meeting Charlottetown's City Council voted to accept the lone bid of $146,700 from Ostridge Brothers to restore the front range light. Earlier that year, the city had reached an agreement with the Department of Fisheries and Oceans to take ownership of the structure with the understanding that the federal government would pay up to $120,000 to repair and reinforce the walls, construct a new concrete base and surround the foundation with a wide radius of protective armour stone. Charlottetown is hoping to receive an additional sum from the government to cover the entire project. Work on the lighthouse was carried out that summer.

On Thursday, September 12, 2013, the Honourable Gail Shea, Minister of Fisheries and Oceans, representing the Honourable Leona Aglukkaq, Canada's Environment Minister and Minister responsible for Parks Canada, participated in a ceremony which transferred Brighton Beach Front Range from federal ownership to the City of Charlottetown.

For a larger map of Brighton Beach Range Front Lighthouse, click the lighthouse in the above map.

From Highway 1 (University Avenue) in downtown Charlottetown, turn southwest on Euston Street and continue straight (the road will become Brighton Road) until the road ends. Turn right onto Queen Elizabeth Drive and then left onto York Lane where you will find Brighton Beach Range Front Lighthouse.

The lighthouse is owned by the City of Charlottetown. Grounds/tower closed.