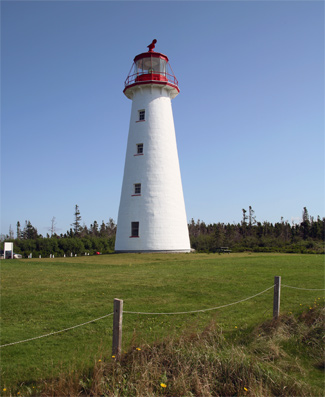 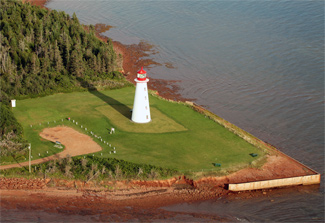 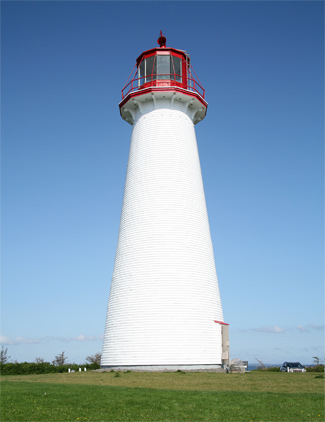 Shipowners and others interested in the trade and shipping at Charlottetown and nearby ports petitioned the colonys House of Assembly in early 1841 for a lighthouse on Point Prim to counteract the many losses which have occurred, and the dangers to which Mariners are exposed at the entrance to the harbour at Charlottetown. In response, a sum of £110 was granted for the erection and completion of a small Light House for the Harbour of Charlottetownto be completed on as early a day the ensuing summer as practicable

A committee actually recommended that the lighthouse be placed on the western point of Governors Island in Hillsborough Bay, but the final decision on the location of the light was left up to Lieutenant Governor Charles A. Fitz Roy. The Lieutenant Governor wrote letters to captains of the Royal Navy requesting their opinion on the most eligible site for placing the light. Three captains recommended that if the light was to serve the sole purpose of entering Charlottetown Harbour, it should be placed on Blockhouse Point or Sea Trout Point, however, if the light was intended for the more general use of the navigation trade in Hillsborough Bay and the Port of Charlottetown, then it should be placed on Point Prim.

As the amount provided by the government turned out to be insufficient to defray the cost of the lighthouse, no contract was entered into in 1841. In 1844, the directors of the Prince Edward Island Steam Navigation Company complained to the government about the total absence of any lights to help guide the steamer St. George on its runs between Charlottetown and Pictou, Nova Scotia. A letter from merchants and ship owners was also presented to the House of Assembly that same year pointing out that they had for many years contributed largely to the revenue of the Colony, by the payment of Light Duty and otherwise, without a single Light House having been erected on any part of the Island.

A group of four men were appointed by then Lieutenant Governor Henry V. Huntley to enquire into the probable expense of erecting a suitable Light House upon Point Prim, together with the annual outlay necessary to maintain it. On November 21, 1844, these men submitted their report that recommended a tower, sixty feet high, be built at a projected cost of £156 for the tower, £358 for the lantern, and £90 for a cottage. Isaac Smith, who had designed Government House and would later design Province House in Charlottetown, drew up a plan for the lighthouse and helped provide the cost estimates. The annual expenses of maintaining the light at Sambro (£279) and Shelburne (£268) were also provided for reference.

The sum of £550 was allocated in 1845 to cover the expense of a lighthouse of stone and brick to be build according to the plan of Isaac Smith. On March 31, 1845, a committee of several men traveled the sixteen miles from Charlottetown to Point Prim in ten sleighs to select the site for the lighthouse. After lunch on the point, the men returned to Charlottetown in one hour and twenty minutes, traversing thirteen miles of the journey on ice.

Point Prim Lighthouse was lit for the first time on December 4, 1845, with John Ings, its first keeper, receiving an annual salary of £ 50. Richard Walsh defaulted on his contract to build the lighthouse, and James Peake was paid roughly £125 for completing and fitting up the lighthouse in 1846. John Ings lived on the second floor of the lighthouse until the keepers cottage was completed.

Keeper Ings served as keeper of Point Prim Lighthouse until mid-August of 1854, when Ewen McLeod assumed responsibility for the light. Keeper McLeod kept the light until the summer of 1857 when he fell ill and passed away. John Gillies and Donald MacPherson were hired to attend the light during the illness of Keeper McLeod and until Finlay MacDonald was appointed keeper on August 6, 1857.

Point Prim Lighthouse, which stands 18.5 metres (60.7 feet) tall from foundation to weathervane, is one of only two circular, brick lighthouses in Canada, the other being Fisgard Lighthouse in British Columbia. Exposed to a harsh, maritime environment, the exterior bricks quickly started to deteriorate, and in 1847 Wrights & Smith were paid £50 for shingling the tower. The tower consists of five levels, counting the ground floor, the lantern deck, and three landings, all of which are connected by a series of wooden steps.

The keepers cottage, which measured 19.5 metres (34 feet) by 4 metres (14 feet), was situated southeast of the tower. Due to the size of the dwelling, the keeper typically stayed at the point alone, but was often joined by his family during the summer. A small extension was added to the cottage in 1912 at a cost of $185.82.

From 1845 to 1849, four lamps set in reflectors were used in the lantern room, but as dim spots existed in the towers arc of coverage, three additional lamps were added in 1850. These early lamps consumed approximately 700 litres (185 gallons) of seal oil each year.

In 1874, the General Superintendent of Lighthouses visited the lighthouses on Prince Edward Island, a year after it joined the Confederation, and reported on their condition. The superintendent found the walls of the brick tower at Point Prim to be in good condition. Seven new lamps and reflectors were provided, and repairs were made to the foundation and lantern, but a new lantern was found to soon be necessary as the present one could not be depended on. The dwelling was declared unfit for occupation, and necessary steps were taken to put it in good condition. A new lantern, the one that is in use today, was put in place in 1882.

A fourth-order Fresnel lens, manufactured by Chance Brothers of England, was placed in the lantern room in 1909. The fixed-white signature of Point Prim Lighthouse was changed in 1958 through the installation of a different Fresnel lens, equipped with flash panels, and a system of weight and pulleys to rotate the lens. Every four hours, the keeper would have to crank up the weights that descended a good portion of the height of the tower inside the wooden shaft that remains in place today.

During World War II, several Prince Edward Island lighthouses, including Point Prim, remained active in the winter months to aid pilots flying out of the British Commonwealth Air Training facilities in Mount Pleasant and Summerside. A pilot named Levigne crashed off Point Prim on a stormy October day during his first solo mission. Several students attending school on Point Prim saw the plane struggling in the air and heard it crash nearby. Though an extensive search with divers was conducted before winter set in, the pilot or wreckage was not found. The following spring, Rolla Murchison, daughter of Keeper Angus Murchison, spotted what she thought was a dead seal on the shore near the lighthouse, but on closer inspection it turned out to be the mangled torso of the lost pilot. Rolla chose not to spend the night at the lighthouse for a few years following the incident.

The light was converted from kerosene vapour to electricity on March 10, 1969. Manson Murchison, the last keeper of Point Prim Lighthouse, was shortly thereafter assigned to Caribou Island Lighthouse in Nova Scotia. After two years there, he served as keeper of the Wood Islands Lighthouse from 1972 to 1974. The keepers cottage and an oil storage shed were sold and removed from the site soon after the light was automated. In early 2010, a modern optic was installed in the lantern room to replace the fourth-order Fresnel lens, which was relocated to the first-floor where it is on display.

Point Prim Lighthouse is currently leased by the Canadian Coast Guard to the Belfast Community Development Corporation, and the Point Prim and Belfast Womens Institute has been operating a museum in the tower during the summer months since 1980. As the area around Point Prim Lighthouse was slowly being lost to the sea, the Coast Guard looked into moving the tower but decided instead to place a retaining wall around the point, which will hopefully check further erosion. In 2010, the Coast Guard announced that it would repair the seawall, expand the parking lot, and construct washrooms at the site before turning Point Prim Lighthouse over to the Belfast Community Development Corporation in the spring of 2011.

Point Prim Lighthouse was recognized as a heritage place under the Prince Edward Island Heritage Places Protection Act on October 3, 2012. On September 25, 2013, the lighthouse was awarded a Provincial Designated Heritage Place plaque and certificate.

In July 2017, improvements were finally completed at Point Prim using nearly $400,000 in federal funding: $318,042 from Atlantic Canada Opportunities Agency's Innovative Communities Fund and $74,492 from Heritage Canada's Canada Cultural Spaces Fund. A keeper's dwelling was built to house a gift shop, historical interpretation centre, and accessible washrooms. This structue has an attached band shell for hosting events and weddings. The parking lot was also expanded, and a reinforced seawall was built to protect the site.

For a larger map of Point Prim Lighthouse, click the lighthouse in the above map.

The lighthouse is managed by Province of Prince Edward Island. Grounds open, tower open in season.