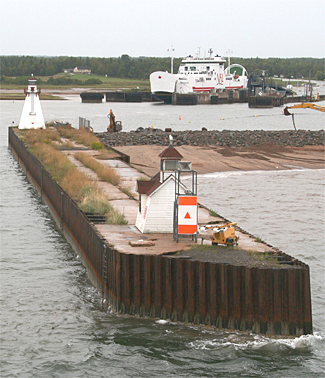 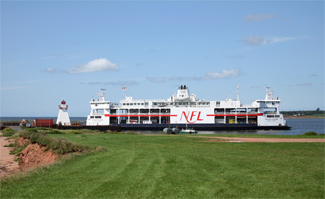 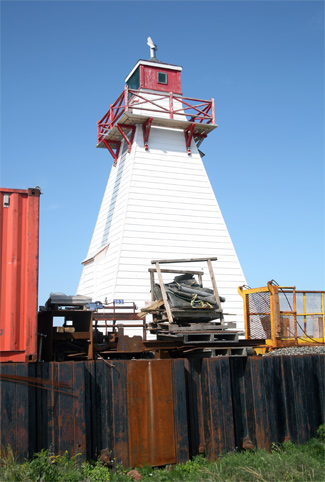 Wood Islands consist of a couple of islands off the southeast coast of Prince Edward Island that are linked to by sandbars, forming a protective harbour. The islands outer point is the southernmost point on Prince Edward Island. A lighthouse was completed on Wood Island in 1876, and on September 6, 1902, range lights were established and put in operation as an additional guide to help mariners enter Wood Islands Harbour. The front range tower was placed 15 metres (50 feet) from the outer end of the south breakwater on the east side of the entrance to the harbour, while the back range tower was placed on the gravel beach, 213 metres (700 feet) N. 85 degrees W. from the front tower.

The front tower was a square, wooden building, with sloping sides, surmounted by a square wooden lantern and had a height of 5.8 metres (19 feet) from its base to the top of the ventilator on its lantern. The back or rear tower was similar in design but had a height of 10 metres (33 feet). Both lights displayed a fixed-red light, and the buildings were constructed by day labour under the supervision of Milton Walsh for $204.92.

James Young, the first keeper of the range lights, served from 1902 until the end of 1935, when he resigned. Harold E. Young then served from 1936 to 1943, when he too resigned. William Robert Brown had the shortest tenure as keeper of the range lights, serving from April 1943 until his death in November 1944. Browns sister Hazel M. MacFarlane attended the lights until the close of navigation in 1944. Alexander J. Young was placed in charge of the lights at the beginning of 1945, but after just three days of service, his appointment was cancelled by orders from Ottawa, and Hazel MacFarlane was reinstated. Hazel was still serving as keeper of the range lights when they were electrified in 1963.

The federal government set about building a ferry port in the communitys small harbour, dredging sand from the harbour bottom and constructing wharves and piers. A new privately owned company, Northumberland Ferries Limited, was established to manage and operate the seasonal ferry service under license from the federal government, which retained ownership of the terminals, real property, and vessels. The ferry service has been in operation since 1941 and has been the islands only such service since the Confederation Bridge opened in 1997.

A substantial shed was attached to the front range tower in 1946 to house fog alarm equipment to operate a trumpet that protruded from the seaward side of the tower. The range lights were decommissioned in 2007 and moved next to Wood Islands Lighthouse in 2013.

For a larger map of Wood Islands Range Rear Lighthouse, click the lighthouse in the above map.

Take the ferry from Caribou, Nova Scotia or Highway 1 from Charlottetown on Prince Edward Island to reach Wood Islands. Near the ferry landing, take Lighthouse Road east to Wood Islands Provincial Park from where you can view the lighthouse.