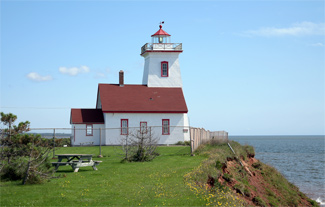 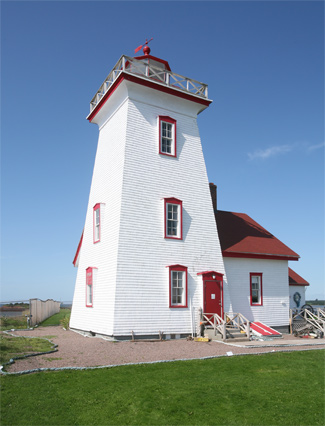 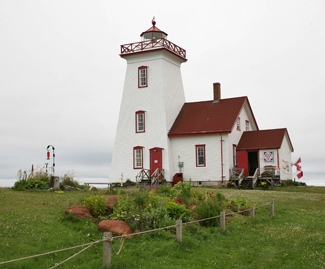 Formerly known as Port Woods, the community of Wood Islands is located along Northumberland Strait on the southernmost point of Prince Edward Island. The harbour here has long played an important role in the islands history. A mail run between Wood Islands and Pictou, Nova Scotia was the islands only connection to the mainland until 1827, and today, the last ferries to serve the island link the same two ports. During its session of 1874, the Canadian Parliament appropriated $6,000 for the erection of a lighthouse at Wood Islands, and a contract for $3,000 was entered into with Archibald McKay of Moncton. Work on the Wood Islands Lighthouse commenced in 1875 on a parcel of land acquired from Thomas Mahon for $300. McKay abandoned the project after having received $900 under the contract, and the Department of Marine hired Donald MacMillian to complete the work. The eight-room structure was finished during the autumn of 1876 and put into operation on November 1 of that year.

The first floor of the attached dwelling originally featured a kitchen, sitting room, and two bedrooms, while four bedrooms were found upstairs. The wooden, square tower, with pedimented windows and a decorative flared cornice topped by a wooden balustrade, rises to a height of 12.2 metres (40 feet). The original illuminating apparatus was a fourth-order lens that displayed a fixed white light at a focal plane of eighty feet.

James McMillan, the first keeper, was a brother of Donald McMillan who completed the construction of the lighthouse. Keeper McMillan and his wife Lily had four sons, known as the lighthouse boys, one of whom, William, replaced his father as keeper in 1887. In 1898, William McMillan was found guilty of offensive partisanship, canvassing, attending caucus meetings, denouncing the Liberal party and Sir Wilfrid Laurier (Prime Minister of Canada) in particular, and was dismissed as keeper of the lighthouse. The dismissal prompted a heated debate in the House of Commons, where Alexander Martin suggested that William McMillan was fired due to his refusal to vote for a certain liberal candidate. Mr. Martin complained that turning Keeper McMillan and his widowed mother (James McMillan passed away in 1896) out of house and home in the fall of the year with the approach of the inclement season was a shameless transaction.

In the early 1980s, the Coast Guard built a detached dwelling near the Wood Islands Lighthouse for the keeper, who had been the last keeper on Prince Edward Island that still resided in a dwelling attached to a light tower. No longer needed, the historic dwelling was going to be removed, but local residents intervened and initiated talks with the Coast Guard and provincial government that kept the lighthouse intact. The detached bungalow was removed from the site in 1991.

The bottom floor of the tower was renovated in 1984 to accommodate equipment for a fog alarm that was mounted on a small balcony. The fog alarm was discontinued in 1998, and its balcony was removed in 2002.

In 1998, the Wood Islands and Area Development Cooperation opened the lighthouse to the public. Visitors will find a gift shop in the lighthouse along with a period bedroom, kitchen, and keepers quarters. Other rooms are devoted to displays on rum-running, Northumberland ferries, the islands fishing industry, and the phantom ship.

At first light on March 10, 2009, the Wood Islands Lighthouse was uprooted and moved 70 metres (230 feet) inland. When the lighthouse was built in 1876, it stood almost 150 metres from the shore, but due to erosion, this distance was gradually reduced until just three metres separated the structure from the edge of a steep bank that leads down to the waters of Northumberland Strait. The lighthouse was jacked up then placed on steel beams and wheels to facilitate the move, which was done during the winter when the frozen ground would provide the needed support.

Wood Islands and Area Development Corporation became the owner and operator of the Wood Islands Lighthouse Museum in December of 2009. In 2011, a new septic system, washroom facilities, and a 1400-square-foot addition to the basement were completed to allow the lighthouse to support the ever-increasing number of visitors to the site.

Wood Islands Lighthouse recognized as a heritage place under the Prince Edward Island Heritage Places Protection Act on October 3, 2012. On September 25, 2013, the lighthouse was awarded a Provincial Designated Heritage Place plaque and certificate.

For a larger map of Wood Islands Lighthouse, click the lighthouse in the above map.

Take the ferry from Caribou, Nova Scotia or Highway 1 from Charlottetown on Prince Edward Island to reach Wood Islands, where you will find Wood Islands Lighthouse Museum & Interpretive Centre on the east side of the harbor near the ferry landing. The lighthouse can be reached by turning east just north of the ferry landing onto Lighthouse Road and following it to its end. The lighthouse is open daily from the first part of June through late September. For more information, call (902) 962-3110 in season.