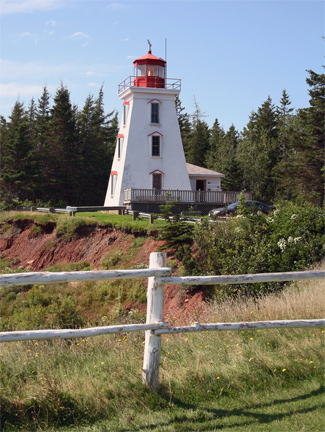 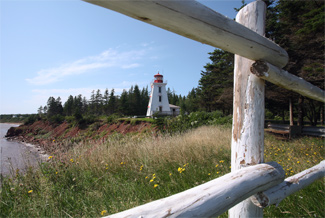 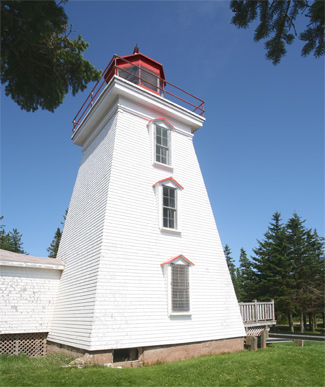 After Parliament appropriated $2,000 in 1880, tenders were invited for the construction of a new lighthouse on Cape Bear, near the southeastern tip of Prince Edward Island. John Whalen received $1,374 for completing the lighthouse the following year on land that was purchased for $75 from Thomas Munn. The original lantern and lighting apparatus cost $1,044 and were shipped to the island in seventeen cases. This coastal beacon, which aided the development of the fishing industry on the southeast shore, originally housed a revolving red catoptric light that produced a bright flash every thirty seconds and could be seen from a distance of twelve miles.

The wooden, tapered tower is 12.4 metres (40.7 feet) in height from base to vane and is square in design. The elevated terrain on which the lighthouse stands contributes to the light's focal plane of 22.6 metres (74.1 feet).

In 1891, leaks in the roof were patched, the cellar floor was taken up, the chimney above the roof was repaired, and the corner casings on the tower were removed and the shingling extended to the corners. A contractor bored a hole to a depth of sixty feet at the station in 1893 in an attempt to create a well, but now water was found. This work didnt cost the government anything as the contractor undertook the task on condition of it being successful. A well was successfully dug in 1898 at a cost of $100.

In 1899, the keeper's dwelling attached to the tower was extended by 6.4 metres (21 feet) at a cost of $463.85. In 1947, Wesley Coles, a house hauler from Prince County, moved the lighthouse and attached dwelling due to erosion of the nearby cliffs.

The first keeper of the lighthouse was Thomas H. Munn, who received an annual salary of $300. Keeper Munn, according to family tradition, fell from the lantern in 1890 and was bedridden for three years before he passed away in 1893. During this period, his son, John, cared for the light. William Harris was appointed keeper at Cape Bear on November 11, 1896 and was succeeded by Martin L. Jorden in 1905.

Hiram Hyde of Murray Harbour was the fourth keeper of the Cape Bear Lighthouse, and when he passed away his body was laid out in the base of the tower. Wallace White recalls that he and a friend went to the lighthouse, as they had never seen a dead man. En route to the lighthouse, the two boys were chased by Vimy White with a stick after cutting through her yard. Wallace claims they were more afraid of her than they were of seeing a real deceased man.

Clarence White, a veteran of World War I, served as the fifth keeper at Cape Bear, and he was replaced by Ewart Keeping.

A Marconi Wireless Telegraph Station was built adjacent to the Cape Bear Lighthouse in 1905, one of seven such stations established by the Department of Marine and Fisheries around that time. Its principal purpose was to communicate with ships at sea and the ice-breaking steamers, Stanley and Minto, which linked Pictou, Nova Scotia with Charlottetown and Georgetown, Prince Edward Island. B. E. Hobbs operated the station from 1905 to 1912, and Thomas Bartlett then kept the station until it was relocated to Charlottetown in 1922.

On the night of April 14, 1912, Bartlett received the first distress signal in Canada from the Titanic as it was sinking off the coast of Newfoundland. A similar station at Cape Race in Newfoundland was in communication with the Titanic, but at that time Newfoundland was not a part of Canada. The Cape Bear Marconi Station ceased operations in 1922, and the building that housed the station was sold to Robert Glover in 1929. The structure now serves as a family home in Guernsey Cove.

During the Second World War, the Cape Bear Lighthouse proved useful for spotting German U-boats that approached the coast. Several were seen along the shore but disappeared while being tracked.

Electricity reached the station in 1960, the same year that Keeper Ewart A. Keeping retired after serving at the lighthouse since 1926. Following automation of the station, the dwelling was moved a quarter of a mile up the road in 1960, where it served for a time as a cabin for overnight guests.

In 1998, the Cape Bear Lighthouse was leased to the newly formed Northumberland Community Development Corporation, which restored the tower, added the Marconi Museum, and opened the complex to the public.

In September 2009, Northumberland Community Development Corporation was in discussions with the Department of Fisheries and Oceans and the Canadian Coast Guard over the need to move Cape Bear Lighthouse, as the nearby shoreline was being lost at the rate of roughly one metre per year. Northumberland Community Development Corporation would like to take ownership of the lighthouse and relocate it to a thirty-two-hectare parcel of land called Bill of the Cape, which has a spectacular view and more space than is available at Cape Bear. The proposed location would be able to accommodate tour buses, which would broaden the clientele base at the combination lighthouse and Marconi museum.

After surveying commercial fishermen and recreational boaters regarding the need for a light at Cape Bear, the Coast Guard decided to replace the Cape Bear Lighthouse with a light on a metal tower. A new square, skeletal tower was erected near the lighthouse in May 2011 and now serves as the official Cape Bear Light.

Cape Bear Lighthouse and Marconi Station Incorporated purchase fifty hectares of land roughly 400 metres east of the lighthouse and hoped to move the structure in October 2014, after receiving ownership from the Department of Fisheries and Oceans. Its about the only thing we have left down in southern Kings County. Its one of the last symbols, said group president Wallace Jorden.

Cape Bear Lighthouse was recognized as a heritage place under the Prince Edward Island Heritage Places Protection Act on October 3, 2012. On September 25, 2013, the lighthouse was awarded a Provincial Designated Heritage Place plaque and certificate.

The lighthouse was finally moved 100 feet away from the eroding bluff on December 22, 2014 and then moved another 400 feet to its new home on April 21, 2015 - exactly six days and 103 years after the distress signal of the famed Titanic was picked up by the stations Marconi radio operator. Plans are to develop the new site to include nature trails and tours, supervised water and boating activities, and a Marconi/Titanic Museum. The new parcel on which the lighthouse stands was previously owned by two lighthouse keepers: Thomas H. Munn, and later Martin Luther Jorden.

For a larger map of Cape Bear Lighthouse, click the lighthouse in the above map.

From Highway 4 east of Woods Islands, go east on Route 18 (Cape Bear Road) to the southeast part of the cape and continue east on Black Brook Road a short distance where you will find Cape Bear Lighthouse down a short road to your right. Cape Bear Lighthouse is open daily mid-June to mid-September from 10 a.m. to 6 p.m. Call (902) 962-2917 for more information.