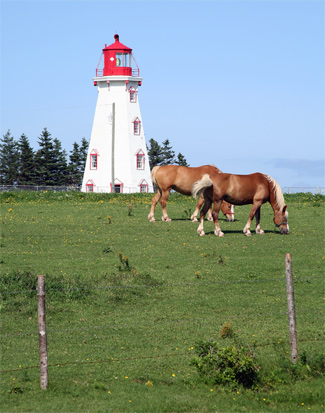 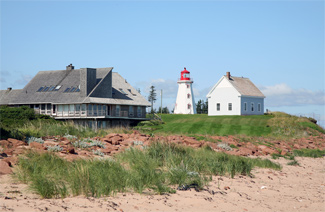 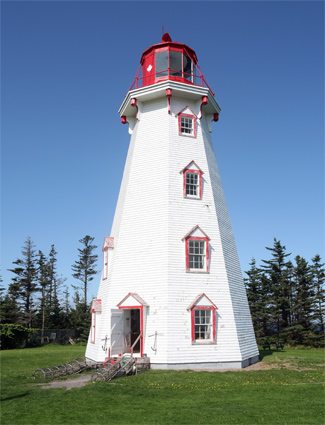 Georgetown, also known as Three Rivers, is located along the eastern shore of Prince Edward Island on a peninsula bounded by the Cardigan, Brudenell, and Montague rivers. Two small, offshore islands, Boughton Island to the north and Panmure Island to the south, define the entrance to Georgetown Harbour and provide some protection from the open waters of Northumberland Strait.

A petition by several inhabitants of Kings County was presented to the House of Assembly of Prince Edward Island in 1849 noting the large number of vessels that frequented Georgetown Harbour and the great risk and loss to such shipping caused by the absence of a lighthouse near Georgetown. This petition was referred to a special committee that acknowledged the usefulness of a lighthouse at Georgetown and proposed that Americans using the harbour be made to pay an annual fee per vessel to support the operation of the lighthouse. The committee recommended that a sum of £150 be granted for the construction of a lighthouse at Georgetown, but no action was taken on this recommendation.

After a similar petition was presented to the House of Assembly the following two years, a special committee recommended that the Lieutenant Governor procure the requisite plans and estimates in 1851 for the erecting of a lighthouse upon Boughton Point, or some other convenient site, near the entrance of the Harbor of Three Rivers.

The Lieutenant Governor requested that Captain Henry W. Bayfield, who was surveying the Gulf of St. Lawrence, give his opinion on the best location for a lighthouse near Georgetown. Captain Bayfields response included the following: A light properly placed on Panmure Point, the north east extremity of Panmure Island, would answer the double purpose of leading into the Harbour of Georgetown, and of guiding vessels clear of the dangerous Bear Reef; whilst its disappearance behind Boughton Island would, in like manner, be a guide to vessels all along the coast, far up towards the East Point; it would thus be far more useful as a Coast Light than it would be if placed on Boughton Island.

A detailed specification for the construction of a lighthouse and keepers dwelling to be built with sound wood and island stone was also prepared in 1851, and the cost of the project was estimated to be approximately £620. Work on Panmure Head Lighthouse commenced in 1853 with a total of £647 being spent that year. This amount included £20 paid to Archibald MacDonald for a one-acre site on the northeast point of the island and a right-of-way to the property, and £5 paid to William MacDonald for clearing the land.

William MacDonald was appointed the first keeper of Panmure Head Lighthouse at an annual salary of £50. He started receiving his pay on November 20, 1853, so the lighthouse was likely put into operation around the end of that year.

Panmure Island Lighthouse is 17.8 metres (58.4 feet) tall from its base to vane and was the second formal lighthouse built on Prince Edward Island. As the first lighthouse at Point Prim was built of brick, Panmure Head has the distinction of being the islands first wooden lighthouse. The octagonal tower on Panmure Island is supported by a stone foundation and was built with heavy timbers using techniques employed by the local shipbuilding industry such as the use of wooden pegs or trunnels. The tower, which contains four stories connected by a wooden staircase, has many decorative features, like a corbelled cornice and pedimented windows and door, which make it a favorite subject for photographers.

Several repairs to the lighthouse were made over the years, and various outbuildings were added to the station. In 1858, James Millner was paid £70 for putting a new copper roof on the tower. Thomas Alley, Superintendent of Public Works for Prince Edward Island, issued a report on the state of the Panmure Island Lighthouse in 1861 in which he noted a few deficiencies in the tower. First, the windows leaked since they were not properly secured with zinc, and second, a considerable quantity of snow drifted into the structure, as the exterior walls were not properly papered before the outside finish was put in place. The superintendent recommended that a fence be constructed to keep the pigs from the neighboring farm from rooting away the foundations of the stations buildings and that the keeper be supplied a boat so he could reach Georgetown in the event of an emergency without having to take a circuitous route.

In 1885 a new lantern was placed atop the Panmure Head Lighthouse and a fourth-order lens was substituted for the system of reflectors formerly used. The light remained fixed white, but the improved illuminating apparatus now made it appear with equal intensity from all points of approach. During the night of September 6, 1887, the lamp inside the lens exploded severely damaging the lens along with the plate glass in the lantern room. Fortunately the lamp was extinguished as a result of the explosion; otherwise, the entire tower likely would have burned to the ground. A portable lamp was displayed in the damaged apparatus until a new lens was supplied.

A 270° fourth-order Fresnel lens was placed in the lantern room in 1908. That same year, a rectangular fog-alarm building, measuring 9.4 metres (31 feet) by 7.3 metres (24 feet) was constructed near the tower by B. D. Huntley to house a 3-inch diaphone plant, supplied by the Canadian Fog Signal Company of Toronto for $7,100. J. M. Clark of Summerside erected a dwelling for the fog alarm engineer in 1909 at a cost of $1,900.

William Albert MacDonald served as keeper of the Panmure Head Lighthouse for almost twenty-five years before he retired in 1936 at the age of seventy. Keeper MacDonalds granddaughter Therese recalled an exciting incident that happened near the lighthouse. About the first of May, 1937, I was thinking about how I would celebrate my tenth birthday when Granddad, normally not an excitable man, roared into the kitchen shouting, Quick, outside everyone the Hindenburg is passing over! All the family rushed out and crossing the horizon was what looked like an enormous, oval shaped grey object  the Hindenburg. One by one, Granddad allowed us to close one eye and peep through the famous spyglass as this amazing phenomena passed slowly from our vision.

A new one-and-a-half storey keepers dwelling was built just west of the lighthouse in 1957. In the late 1950s, a bulls-eyed Fresnel lens was placed in the lantern room, and the wooden tube that runs up the center of the tower was added to house the weights that caused the lens to revolve as they slowly descend through the tower. The fog-alarm building was declared surplus in 1980 and removed to an adjacent property; it is the structure just southeast of the tower today.

William J. MacDonald, the final keeper of Panmure Head Lighthouse, retired in 1985 upon automation of the lighthouse, and the nearby keepers dwelling was rented to his daughter Margaret and her husband Roger MacLeod. The couple later purchased the house, and for many years they opened the lighthouse to the public during the summer months on behalf of the Panmure Island Lighthouse Association.

The Fresnel lens was removed from the lantern room around 2010 and replaced by a modern beacon.

Panmure Head Lighthouse was recognized as a heritage place under the Prince Edward Island Heritage Places Protection Act on October 3, 2012. On September 25, 2013, the lighthouse was awarded a Provincial Designated Heritage Place plaque and certificate.

Ownership of Panmure Island Lighthouse was transferred to Panmure Island Lighthouse Association in December 2015, and at that time, the group received a one-time grant of $80,000 to help offset maintenance of the property. With these funds, asbestos was removed from the main floor of the lighthouse, allowing this space to be converted into a gift shop. The tower was also repainted, and the parking lot was redone. Now it is up to the association to maintain the lighthouse and raise funds to renovate the upper levels.

For a larger map of Panmure Head Lighthouse, click the lighthouse in the above map.

From Route 4 on the eastern shore of Prince Edward Island, turn east onto Route 17 (Main Street in Montague or Point Pleasant Road in Murray River) and drive for 18.2 km (11.4 miles). At that point, turn north on Panmure Island Road (Route 347) and drive across the causeway to the island. Panmure Island Lighthouse is located down the second road to your right (Lighthouse Road) as you arrive on the island. The tower is open daily from mid-June through mid-October. Call (902) 969-9380 for more information.

The lighthouse is leased to the PEI provincial government. Grounds open, tower open during the summer.