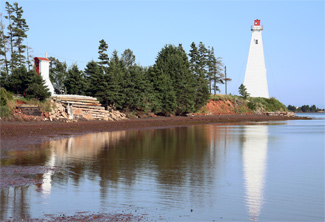 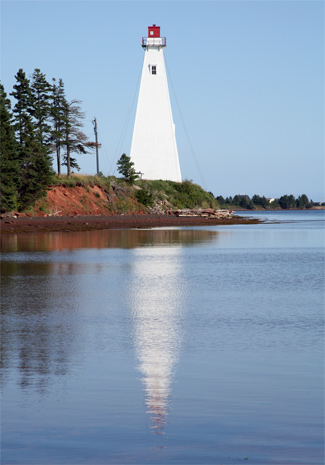 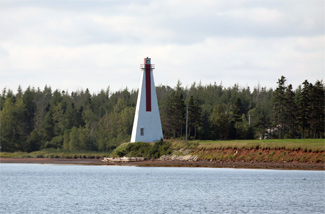 In 1898, the Annandale Range Lights were established on land purchased from Alfred Robertson, and George and Edwin McFarlane at a cost of $80 to guide mariners into Grand River and to the wharf at Annandale. The lights commenced operation on August 26th of that year with Alfred Robertson as their first keeper.

The front range light was placed in the village of Annandale, 220 feet north from the shore and 312 feet northeast of the public wharf. This structure consisted of a square wooden enclosed tower with sloping sides and was surmounted by a square wooden lantern. The tower was painted white and stood 4.3 metres (14 feet) high from its base to the vane atop its lantern.

The back range light was erected on the north shore of the Grand River, 1,323 metres (4,340 feet) from the front light. This structure was a square, open-framed tower with sloping sides and was surmounted by an enclosed wooden lantern. The side of the tower facing the channel was slatted to make it more conspicuous, and the whole structure was painted white. From base to vane, the tower stood 17 metres (56 feet) tall and exhibited a fixed white catoptric light at a focal plane of 22 metres (72 feet) above the high water mark.

To further aid navigation, a red light, exhibited from a mast at a height of 3.4 metres (11 feet), was established on the northwest corner of the Annandale wharf to indicate the turning point in the channel. Also, a diamond-shaped beacon was placed atop a ballasted timber platform on a sandbank located on the north side of the channel, southeast of the front range light. The sandbank was covered by water for three or four hours at high tide.

All this work was done under the supervision of Milton Walsh, foreman of works and general repairs for the Department of Marine and Fisheries on Prince Edward Island, at a cost of $2,705.55.

On October 11, 1900, the back range light tower was toppled by a gale, and it was later decided to discontinue all the lights at the station for the rest of the season to avoid confusing mariners. The following year, the rear tower was replaced by a new structure, situated 29.3 metres (96 feet) closer to the front tower along the same range line. This placed the tower on the east side of a point known locally as Juniper Point. This tower was also a square, open-framed tower with sloping sides and was topped by a square enclosed wooden lantern. The side facing the range line was again slatted, and the entire structure was painted white. The height of the new tower was 19.8 metres (65 feet), which placed the light at a focal plane of 23.8 metres (78 feet) and makes the Annandale Rear Range Lighthouse the tallest light on Prince Edward Island. A slatted beacon measuring 1.7 metres (5.5 feet) by 1.2 metres (4 feet) was placed atop the front range tower and featured a white diamond on a red background.

The mast light established on the Annandale wharf was discontinued due to the relocation of the rear range light. The changes to the station carried out in 1901 under the direction of Milton Walsh cost $464.87. In 1905, Milton Walsh returned to the station an enclosed the rear range light tower, giving it its present appearance. The front range light was relocated to a new site in 1917 by J. M. Morrow under a contract for $70.

At some point, the original front range tower was replaced by the present square, pyramidal tower that stands 5.2 metres (17 feet) tall. A vertical red stripe adorns the seaward face of the otherwise white tower, matching the pattern of the rear tower. The front tower is currently situated 1,376 metres (4,514 feet) from its companion rear range light, and due to the bluff on which the tower rests, it has a focal plane of 9.6 metres (31.5 feet).

The range lights were electrified in June 1960, and Chester Banks was appointed as a caretaker at an annual salary of $100 to keep an eye on lights. This resulted in a saving of several hundred dollars a year as two keepers were no longer required.

In 1988, the Annandale Back Range Light was sheathed and reshingled. The rear range lighthouse was discontinued in 2015, and the front light was made a sector light, showing a white light over an arc of one degree. The white light serves to mark the proper channel and is bounded by a red light one one side and a green light on the other.

St Peter's Development Corporation submitted a petition for ownership of the lighthouse under the Parks Canada Heritage Lighthouse Program, but then in 2020, the Norton family formed the non-profit Annandale Lights Inc. with the goal of taking ownership of the rear lighthouse, so the first attempt at ownership must have faltered. The rear range tower had been recently moved inland to protect the lighthouse from an eroding bank when the Norton family formed the non-profit and rennovations were being made to the tower. The family plans to have the tower open to the public on select days so people can see the interior and the names of several community members who signed an inside wall.

In late October 2020, Jonathan Wilkinson, the Minister of Environment and Climate Change, announced the designation of Annandal Rear Range Lighthouse as a heritage lighthouse under Canada's Heritage Lighthouse Protection Act. The act protects the heritage character of lighthouses and requires that they be resaonably maintained.

For a larger map of Annandale Range Rear Lighthouse, click the lighthouse in the above map.

From Highway 4 just north of Bridgetown on the eastern side of the island, turn south on Highway 310 (Annandale Road) and after 8 km (5 miles) Annandale Range Rear Lighthouse will be on the shore between Lighthouse Road and Norton Road. The front side of the lighthouse is visible across fields at the end of Norton Road.