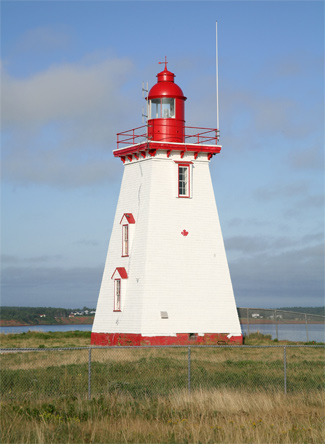 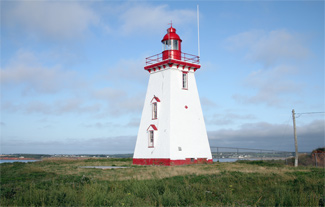 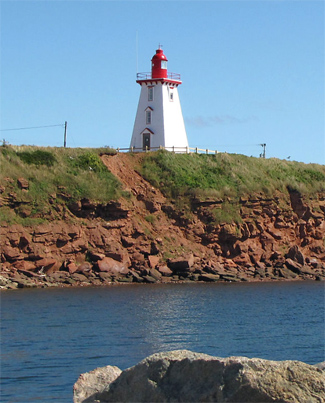 On the eastern shore of Prince Edward Island, the Souris River empties into Northumberland Strait. Mikmaq first settled the area around the river followed by French Acadians, who were expelled by the British in 1758. While the Acadians were living along the river in 1724, they were inflicted by a plague of mice, or souris in French, and this incident led to the naming of the settlements on the flanks of the river Souris East and Souris West. Souris East was incorporated as the Town on Souris on November 14, 1910.

John Knight settled in East Souris in the 1800s and is credited with being the father of Souris as he purchased a wharf, constructed a breakwater, and ran a shipbuilding business all of which helped establish Souris as a major port.

In 1879, tenders were invited for constructing a lighthouse on Knights Point, and a contract, for the sum of $630, was awarded to Peter Alyward. The lighthouse, a square pyramidal tower painted white, was completed the following year and placed in operation in November with Angus McDonald serving as the first keeper. A fixed-white light, displayed in the lantern room at an elevation of 26 metres (85 feet) above high water, could be seen from all points seaward.

In October of 1881, the light was altered to show a streak of red to indicate the anchorage ground sheltered by the breakwater. Andrew Leslie also constructed a keepers dwelling, attached to the tower, that same year at a cost of $732.

A fixed-red light, exhibited from of a small lantern hoisted atop a 12.5-metre (41-foot) mast, was established on the outer end of the breakwater at Souris East at the opening of navigation in 1889. A square, flat-roofed shed was located at the base of the mast, and the whole structure was painted white and erected by Peter Aylward under a contract for $400. This light helped vessels accurately locate the outer end of the breakwater and gain safe anchorage in its lee. When this light was established, the red sector in the East Souris Lighthouse was discontinued, but mariners were alerted that foul weather might prevent the keeper from relighting the breakwater light if it happened to be extinguished. A southeast gale on August 21, 1893, which broke up a 46-metre (150-foot) section in the middle of the breakwater, carried away the mast and shed, but the light was quickly replaced.

The breakwater light was carried away again during a southwest gale in the autumn of 1895. A temporary replacement light was put in operation on May 4, 1896 until a new foundation block was constructed and a new mast and shed placed thereon later that summer.

In 1907, an open steel skeleton tower with a height of 7.6 metres (25 feet) and topped by an octagonal lantern with a diameter of 1.2 metres (4 feet) was placed at the outer end of the breakwater at Souris East. The tower was constructed at the Department of Marines shipyard at Sorel for $650, and an additional $599.98 was expended for labour and other costs in erecting the tower. That same year, a fourth-order, double-flashing Fresnel lens was placed in the lantern room of the East Souris Lighthouse. The new signature of the light was one group of two flashes every five seconds (flash 0.22 second, eclipse 0.78 second, flash 0.22 second, eclipse 3.78 second). A modern skeletal tower topped by a red light graces the end of the Souris breakwater today.

The keeper of the Souris East Lighthouse was supplied a hand fog horn in 1927. A fog alarm building was placed on the breakwater in 1955, but this function was later transferred back to the lighthouse station when a shed was built adjacent to the lighthouse.

Frank McIntosh became keeper of the Souris East Lighthouse in 1920 and was responsible for the main light at Knights Point as well as the beacon on the breakwater. Franks son Andrew helped out at the station when Franks health started to fail and was appointed his successor in 1935.

Donald Osborne spent part of his childhood at Saint Mary Island, Quebec, where his father served as a lighthouse keeper. After serving in World War II, Osborne returned to Saint Mary Island and worked under his father for two years, before taking over responsibility for the station in 1948. After getting married and starting a family of his own, Keeper Osborne accepted an assignment to Souris East Lighthouse in 1956 so his children could attend public school.

When the Osbornes first moved into the dwelling attached to the tower, their residence was infested with rats. In an attempt to keep the rodents away at bay, Keeper Osborne placed crushed glass around the perimeter of the lighthouse. This lessened the problem, but a few traps and a good house cat were still needed.

The dwelling attached to the lighthouse was removed in 1959, and a new house was built for the keeper at a distance of roughly 100 yards from the tower. The fourth-order Fresnel lens installed in 1907 was replaced by another lens of the same order in 1961, the same year the light was electrified. Until 1974, the keeper on duty had to climb to the top of the tower every three hours and fifteen minutes to wind up the weights that revolved the lens. Both of the former lightkeeper residences were eventually relocated to nearby sites and are reportedly still standing today.

Osborne was used to maintaining a light, fog signal, and a stations structures, but these duties were diminishing as stations were electrified and maintenance crews were dispatched to take care of painting and repairs. I was getting the same pay, but my duties were practically nil, Osborne recalled. I wanted to do a full days work for a full days pay and it hurt when people said I had it easy.

With some reluctance, Osborne retired as keeper in 1974, moved to Charlottetown, and began to work as a cook on a buoy tender named for his brother Fred G. Osborne, who had started as a keeper and worked his way up to a district manager.

Francis McIntosh, whose father and grandfather had both been keepers of Souris East Lighthouse, started as an assistant keeper under Osborne before becoming head keeper in 1974. McIntosh was the last remaining active keeper on Prince Edward Island when he retired on June 18, 1991, after thirty years of service. The fog alarm at the station remained active for a few more years until being discontinued in 1999.

The lighthouse was transferred to Souris Harbour Authority in 2009. On July 19, 2010, Federal Minister of Fisheries and Oceans Gail Shea joined P.E.I. Minister of Innovation and Advanced Learning Allan Campbell, members of the board from the Souris Harbour Authority Inc., and local residents to celebrate the grand opening of the Souris East Lighthouse as an interpretive center and gift shop. Atlantic Canada Opportunities Agency invested $50,000 in the project through its Innovative Communities Fund program. Visitors to the lighthouse can know learn about its history and that of Souris Port through an interpretive center established inside the structure. It is also possible to climb to the top of the tower for a panoramic view of the surrounding area.

Souris East Lighthouse was recognized as a heritage place under the Prince Edward Island Heritage Places Protection Act on November 1 , 2011. On September 25, 2013, the lighthouse was awarded a Provincial Designated Heritage Place plaque and certificate.

Souris East Lighthouse, which today emits a signal of two seconds of white light followed by two seconds of darkness, still stands guard over the nearby harbour that is home to several fishing vessels as well as the ferry which serves the Magdalen Islands.

For a larger map of Souris East Lighthouse, click the lighthouse in the above map.

From Route 16 (Main Street) on the eastern side of Souris, turn south on MacPhee Avenue and continue to the harbour. Turn left onto Breakwater Street, which will lead you to Souris East Lighthouse, which is now seasonally open to visitors.