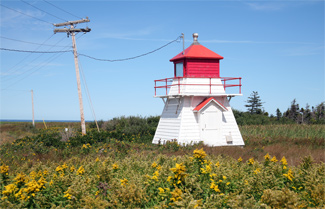 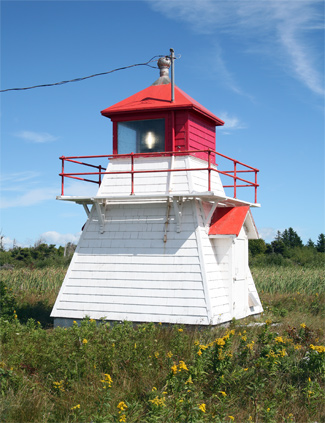 Howards Cove Lighthouse is located on a cliff above the harbour in Howard's Cove on the western shore of Prince Edward Island. Coast Guard reports refer to the location as Seal Point, but neither maps nor locals refer to it by that name. The light was established in 1960, and the current tower, which stands 5.8 metres (19 feet) tall from base to vane, was built in 1976. The square white tower with a red lantern has a focal plane of 14.2 metres (46.6 feet) and displays a white light with the following characteristic: two-second flash followed by four-second eclipse.

In April of 2011, Robert Henderson, Member of the Legislative Assembly for OLeary-Inverness, chose Howards Cove Lighthouse as the location to present Carol Livingstone, president of the P.E.I. Lighthouse Society, with a $4,000 P.E.I. Department of Tourism grant. The society will use the grant to promote island lighthouses and to educate community organizations about the Coast Guards lighthouse divestiture program.

Howards Cove Port Authority hopes to take ownership of Howards Cove Lighthouse under the divestiture program, though they have no real plans for the structure other than to preserve it as a symbol of the port. Its just kind of a harbour feature wed like to keep, Port Authority chair Shawn Cooke said, rather than see someone come in and haul it away.

For a larger map of Howards Cove Lighthouse, click the lighthouse in the above map.

Take Route 14 on the western shore of the island to Howards Cove (between Routes 146 and 147) and then go west on Wharf Road to Seal Point Harbour. The lighthouse is on a hill overlooking the harbour.


The rock near the lighthouse is known as the Giant's Chair, and its story is linked to the development of a harbor and the construction of a lighthouse at Howards Cove in 1960. The following information on the rock is from the July 4, 1960 edition of the Journal-Pioneer.

The Giants Chair is back on its lofty perch overlooking Northumberland Strait at Howards Cove, near Cape Wolfe, and everyone is that area is happy about it, presumably.

Certainly happy is Minard Thatcher, the superintendent of construction of the new fishing harbour at Howards Cove, whose job it was to reclaim the huge hunk of rock from its grave at the bottom of the harbour and figure out a way to get it back on the cliff-top.

The controversy over the Giants Chair began last summer (1959) when it was suddenly noticed missing. A big stone fashioned exactly like a huge armchair, it was becoming quite a little tourist attraction and people of the Cape Wolfe area had become so attached to it that they were hot under the collar when it disappeared. At the time there was a provincial election on and the political pot was boiling; it was even suggested that either the Liberal organizers or the Conservatives, depending on who you were listening to, had been the cause of its disappearance.

However, disappeared it had, and apparently without a trace, which is no mean feat for a six-ton chunk of sandstone. It then developed that during construction of the harbour below, the Chair had been pushed off the edge of the cliff, fallen into the sea, and was covered with fill to make a wharf.

Protest committees swung into action. The government was notified, and so were the contractors, the press, and any of the general public who cared to listen, that this was an outrage. All this disturbance quickly brought action, and the Giants Chair, after being rediscovered by workmen, was poked at by bulldozers, sent by the government in an effort to remedy the foul deed. However, it lay hard and fast, seemingly immovable, on its side, forlorn on the bed of the sea.

Mr. Thatcher, mentioned above, is foreman of construction for J W and J Anderson, New Brunswick contractors who are building the Howards Cove installation, and he took over the problem. With some ingenuity and a lot of help from both government and contractors machines, the big rock was inched ashore until it lay high and dry.

But it was still far below the place where the people wanted it, which was on the top of the cliff overlooking the strait, and nothing else would do. So, with traxcavator, bulldozer, trucks, toil, sweat, and tears, it was finally lifted, pulled, pushed, dragged, punched and coaxed into its lofty place. Therefore Mr Thatcher promptly relaxed into its spacious interior for a well-earned breathing spell, before continuing his work of overseeing the construction of breakwaters and wharves which now, just about completed, make Howards Cove one of the snuggest little fishing harbours on the coasts of Prince Edward Island.