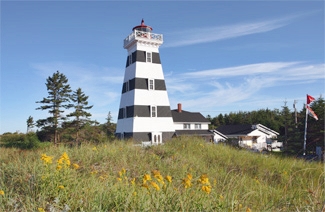 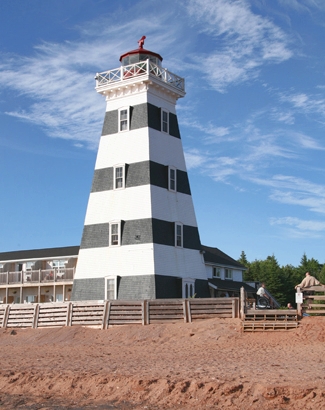 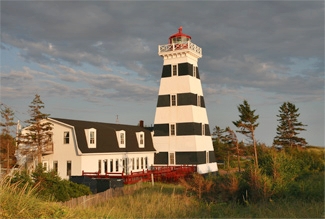 Parliament appropriated $5,000 for a lighthouse on West Point during its 1874 session and added an additional $2,500 to this amount the following year. A $4,559.59 contract to construct the lighthouse, the first to be built on Prince Edward Island since it entered Confederation in 1873, was entered into with Messrs. Mugridge & Co., of Shediac, New Brunswick, and work on the structure started in 1875.

West Point Lighthouse commenced operation on May 21, 1876, exhibiting a powerful revolving light at an elevation of 20.1 metres (66 feet) above high water. The lighting apparatus, comprising eight lamps and powerful reflectors, made a revolution every three minutes producing one red flash followed by three white flashes every ninety seconds.

When built, the West Point Lighthouse consisted of a square, pyramidal tower attached to a one-and-a-half-storey dwelling with a gable roof. The first two floors of the tower served as an extension of the keepers dwelling. The towers bottom floor was used as a parlor, and the second floor was divided into two bedrooms.

Rocks for the foundation, which was built atop a cribwork of logs to distribute the weight and keep it from sinking into the sandy soil, were imported by schooner from Wallace, Nova Scotia, as no building stone was available on Prince Edward Island. To ballast the tower, which is the tallest on the island, large rocks were placed inside the thick walls of the first storey. The lighthouse tower was painted white with red bands on its three seaward faces to serve as a distinctive daymark. The total cost for the lighthouse came to $8,240.17.

When William Mitchell, the Department of Marine agent for Prince Edward Island, visited West Point Lighthouse in 1878 he found its first keeper, William McDonald, to be very attentive. In his official report, Mitchell wrote, I must say that the clean and comfortable state in which I found the whole premises was a credit. The light apparatus appeared in as good order as when first put in operation.

In 1876, the MacDonalds placed a pump organ in the parlor of the West Point Lighthouse, where Mariah and her daughters would often entertain visitors. Many evenings ended with everyone gathered around the organ singing the hymn Let the Lower Lights be Burning, whose chorus provided a reminder of a keepers important calling.

Let the lower lights be burning!
Send a gleam across the wave!
Some poor fainting, struggling seaman
You may rescue, you may save.

The red bands on the tower were changed from red to black in 1915, as black was thought to be more resistant to fading and provided a more visible daymark.

After having helped build it, Keeper William MacDonald served at West Point Lighthouse for fifty years, earning him the nickname of Lighthouse Willie along with an Imperial Long Service Medal presented on behalf of King George V. It is reported that Keeper MacDonald didnt miss a single night at the lighthouse during his lengthy career. After Keeper MacDonalds retirement in 1925, an advertisement was run to find a replacement, and Benjamin MacIsaac, who had served in England, France, and Belgium in World War I before being wounded, answered the call.

Bennie and his wife Pearl chose to live year-round on a farm located a few miles from the lighthouse, partly because the couples fifteen children would never have fit in the small lighthouse cottage. Keeper MacIsaac would spend every night during the navigation season at the lighthouse, and, during World War II, he was required to maintain the light year-round, as it aided the pilots flying out of the British Commonwealth Air Training facilities in Mount Pleasant and Summerside.

After electricity finally reached West Point, the lighthouse was automated on May 19, 1963, and Keeper MacIsaac retired after thirty-eight years of service. Amazingly, West Point Lighthouse only had two official lighthouse keepers, but several unofficial keepers have since served to make the lighthouse the tourist draw that it is today.

The keepers dwelling was torn down shortly after the lighthouse was automated, and the stations barn and oil house disappeared from the site not too long thereafter. When the dwelling was removed, a white band was painted in the middle of the large black band that ran from the foundation to the top of the entrance doorway, making the bands more uniform. For several years after automation, Frank MacDonald, a grandson of William MacDonald, was paid to serve as caretaker of the lighthouse to ensure it functioned properly.

In 1983, the West Point Development Corporation, with Carol Livingstone, a great-granddaughter of Keeper William MacDonald, serving as its founding president, leased the West Point Lighthouse from the Canadian Coast Guard and embarked on a multi-year effort to bring New Life to an Old Light.

During the winter of 1984, the dwelling was reconstructed using the original cloth blueprints and a $54,000 grant from the Canada Community Development Program. On July 1, 1984, the new facility opened as Canadas only Inn in a Lighthouse. The dwelling and tower housed a three-room inn, a craft shop, a museum, and a chowder kitchen. By the following year, it was clear that more space for diners was needed, and a new structure was built nearby for the craft shop.

A large addition was added to the north side of the tower and dwelling in 1987 funded by a $100,000 loan and money from the Canada Employment and Immigration Commission. This extra space housed a restaurant and seven additional guest rooms. Lighthouse aficionados frequently inquired about the possibility of staying in the historic tower, so in 1988, the second floor, which had been serving as a museum, was converted into a bedroom, and many of the museum artifacts were relocated to the third floor.

Now, visitors can stay in the same space that Keeper William MacDonald reserved for his special guests. Mariah MacDonalds legacy at the lighthouse also lives on, as her organ has been returned to its rightful place in the parlor. Numerous residents from the surrounding area and descendants of Keeper MacDonald have been employed at the lighthouse over the years. West Point Lighthouse has deservedly received much attention as a shining example of how a few interested citizens can create an institution that will revitalize a community.

In the first such transfer to occur on Prince Edward Island, ownership of West Point Lighthouse was awarded to West Point Development Corporation on May 21, 2002. In November of 2009, it was announced that roughly $1.5 million would be spent to relocate the restaurant and craft shop at the lighthouse to the Harbourside, where a boardwalk and information centre would be built. The inn portion of the lighthouse was renovated as part of the change, and now all the guests rooms have a deck and face Northumberland Strait. A grand opening celebration for the renovated lighthouse was held on August 21, 2010.

West Point Lighthouse was recognized as a heritage place under the Prince Edward Island Heritage Places Protection Act on November 1, 2012. On September 25, 2013, the lighthouse was awarded a Provincial Designated Heritage Place plaque and certificate.

Take Route 2 to the western side of Prince Edward Island, and then turn left onto Route 14. After 23.4 km (14.6 miles) turn left onto Cedar Dunes Park Road, which leads to West Point Lighthouse. You can actually spend the night in the tower, if you book far enough in advance, or there are several other rooms in the attached inn. The tower also houses an extensive museum with numerous pictures, lenses, and lighthouse artifacts. The museum/restaurant/inn is open from late May through early October.

A Lighthouse Lovers Vacation Home, located near West Point Lighthouse, is available for rent from June through September.