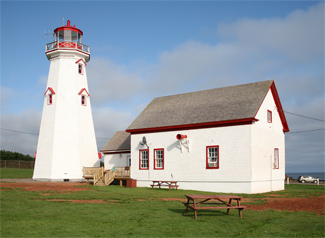 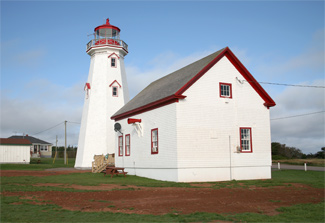 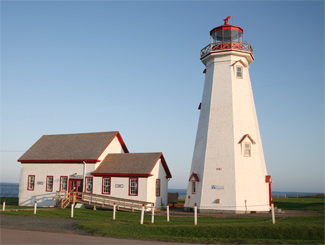 The wooden octagonal towers that mark the northernmost and easternmost points on Prince Edward Island, as well as the transitions between the waters of the Gulf of St. Lawrence and Northumberland Strait, are quite similar, as is the history that led to their construction.

As Prince Edward Islands major ports were not located along the northern shore, the island colony was reluctant to shoulder the entire burden of placing lighthouses on East Point and the North Cape, as foreign vessels stood to benefit the most from these navigational aids. In 1851, the House of Assembly of Prince Edward Island requested its Lieutenant Governor to enter into communications with the several Governments of Canada, New Brunswick, Nova Scotia and Newfoundland, and with the Imperial Government, both as respects themselves and the United States, with the view of ascertaining what proportion they will contribute to the expense of establishing Light Houses at the North Cape and East Point of this Island: as such establishments, at those places, would be of greater utility to the shipping interests of the Countries referred to, than to the similar interests of this Colony.

In 1860, numerous petitions were received from ship owners, ship masters and divers individuals from various communities on the island, renewing the call for lighthouses on the North Cape and East Point. That same year, the Lieutenant Governor noted that the want of Lighthouses on the East and North Capes of the Island has been long seriously felt, and their absence has occasioned great loss of life and property, and he once again wrote to several governments to obtain their assistance and cooperation with us to make good this deficiency.

Money was granted for a lighthouse on North Cape in 1865, and the following year the Province of Canada provided $1,500 to go along with £750 from Prince Edward Island and a contribution from New Brunswick to finally finance the East Point Lighthouse. William MacDonald carried out the work on the dwelling and octagonal tower at East Point in 1866-1867. East Point Lighthouse stands 19.5 metres (64 feet) tall and is divided into four levels plus the lantern room. The windows in the tower are pedimented, a feature that differentiates the lighthouse from the one at North Cape.

East Point was the last lighthouse to be constructed before Prince Edward Island joined the Confederation in 1873. The General Superintendent of Lighthouse for Canada toured the station at East Point in 1877 to determine if the tower was sufficient to support a new lantern. While the superintendent thought the tower could support a new lantern, he did not approve of the manner in which the lights and premises were maintained. The following year, it was determined that the tower was not sufficiently strong to sustain the weight of a new lantern and illuminating apparatus so improvements to the tower had to made. A new revolving white light, which attained its greatest brilliancy every three minutes, was placed into operation on June 1, 1878. The total cost for the modifications to the tower along with the new lighting and revolving apparatus and lantern was $3,474.66.

During a gale on the night of September 12, 1882, the British warship, HMS Phoenix, was en route from Quebec to Halifax, when it ran hard aground on the reef extending from East Point. Tempestuous seas prevented the crew from escaping the stranded vessel in lifeboats until the morning of the 14th. After landing at East Point, some of the ships officers were cared for at the home of Alexander Beaton, the lighthouse keeper, while the ships staff surgeon, Bradley Gregory, was taken to attend Mrs. Daniel J. McDonald, who was in labour. The baby delivered by Dr. Gregory was given the name of Mary Ellen Phoenix McDonald.

A Court of Inquiry ruled that the stranding of the Phoenix was due to the negligent navigation of said ship  that from time of sighting of East Point light to moment of striking reef, the proper precautions were not take to ascertain distance of ship from light. The ships captain, Hubert Grenfell, along with its navigator were severely reprimanded, and the navigator forfeited a year of seniority. Despite this ruling, many believed that the real reason for the shipwreck was the location of East Point Lighthouse.

Three years earlier, the SS Quebec had run aground in nearly the same location, and an investigation into that incident found that the accident occurred through miscalculation of the distance of the light from the reef. The light was listed as being on the hill of the point, understood to be near the tip, while in actuality the tower was half a mile from the actual point. Ephraim Muttart, a member of Parliament from Souris, called for the relocation of the light, and this was done in 1885, when the tower and dwelling were moved 488 metres (1,600 feet) east to a spot about 61 metres (200 feet) from the tip of the point. Bernard Creamer of East Point was paid $2,836 for moving the buildings, which he accomplished by sliding them over greased timber using horses and a capstan.

Also in 1885, a fog alarm building was constructed 100 feet east of the tower to hold two foghorns, powered by compressed air, that when conditions merited would emit an eight-second blast every thirty seconds. The foghorns cost $960 each and were supplied by Messrs. Carrier, Laine & Co. of Levis. A new wooden fog alarm building, rectangular in plan and resting on concrete foundations, was constructed in 1908. Two new 25-hp boilers were installed along with several new machinery parts and fittings. The total cost for this work was $5,072.35. The signature of the light was changed to a white flash every fifteen seconds in 1909 instead of a flash every three minutes. The illuminant at that time was petroleum vapour, burned under an incandescent mantle.

A new two-storey keepers dwelling was built in 1923. Tenders to construct two new keepers dwelling were called for in 1965, and the one-storey, three-bedroom cottages were completed the following year. After the two-storey dwelling was damaged in 1972 by a fire, which also badly burned a lighthouse keeper, the structure was declared surplus. In 1980, one of the two one-storey dwellings was sold off. The other dwelling was sold to the final keeper, Harry Harris, when he retired in 1989. This dwelling remains just south of the tower today.

A radiobeacon was established at East Point in 1935 and commenced operation on November 21 of that year.

In the 1960s, a balcony on the second storey of the tower was added when a fog detector was placed in the lighthouse. Access to the balcony was through a window that was converted into a doorway. The fog alarm was discontinued in 1999, and the balcony was removed in 2002.

In early 2010, Friends of Elmira Inc., which had operated the lighthouse on a lease basis with the Department of Fisheries and Oceans since 2002, was given ownership of the property. The popular attraction provides seasonal employment for fourteen people.

East Point Lighthouse was recognized as a heritage place under the Prince Edward Island Heritage Places Protection Act on October 3, 2012. On September 25, 2013, the lighthouse was awarded a Provincial Designated Heritage Place plaque and certificate.

For a larger map of East Point Lighthouse, click the lighthouse in the above map.

Take Route 16 to the northeast point of Prince Edward Island and then continue down Lighthouse Road for 2.1 km (1.3 miles) to East Point Lighthouse. The lighthouse is open daily from mid-June through Labour Day. Call (902) 357-2106 for more information. Note that the craft shop and café located in the adjacent dwelling may have different hours than the lighthouse.