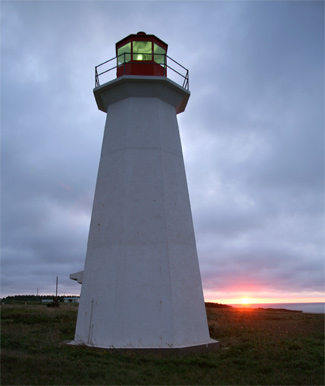 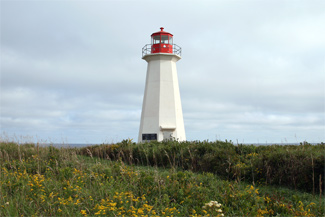 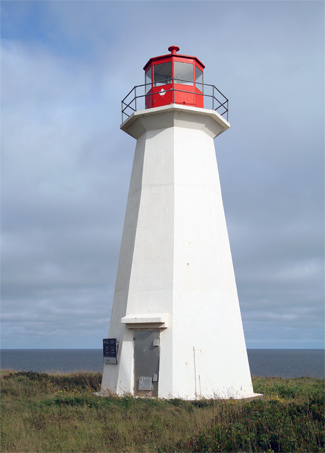 On the northeast shore of Prince Edward Island, between St. Peters Bay and East Point, Naufrage Pond, which is fed by the Naufrage River, empties into the Gulf of St. Lawrence between a pair of piers erected to stabilize the opening. Naufrage is French for shipwreck, and according to oral history, survivors from a shipwreck in 1719 came ashore in this area, continued west, and became the first settlers of St. Peters Harbour. A combination wooden dwelling and lighthouse was erected at Shipwreck Point, just west of Naufrage Pond, in 1913 by the Anandale Lumber Company for $3,213.81. The lantern room, centered atop the two-story structures square hip roof, housed a fourth-order lens, and Francis (Frank) MacKinnon was the first keeper of the light. The dwelling, which had eight rooms, was painted white, while the lantern room was red. The lighthouse was 11.5 metres (38 feet) tall and displayed a flashing white light.

In 1918, a cellar was dug out beneath the dwelling. Besides the lighthouse, the station also had an oil house, barn, a granary, and a well house.

Frank MacKinnon, seen in the top left of this photograph served as keeper until 1917, when he drowned while setting traps on May 12, the first day of the lobster season. The mishap that ended with Frank in the water occurred just offshore from Naufrage, but Frank didn't know how to swim. Frank and Sarah MacKinnon had one son, Neil, who was eight at the time of the accident. Young Neil was familiar with the operation of the light and instructed some gentlemen how to light it the night of his father's passing. It was Sarah MacKinnon, however, who assumed official responsibility for the lighthouse, and she kept the light until 1922, having married Gus Gallant in 1920.

A story passed down through the MacKinnon family tells of how one stormy night the mechanism that rotated the light at Shipwreck Point failed, but Sarah faithfully revolved the lens by hand all night. She later received a letter from a captain thanking her for her diligent attention to the light as he had been dependent on it that very night.

Peter MacKinnon became keeper in 1922 after Sarah MacKinnon Gallant, shown in this photograph with her husband Gus Gallant, resigned. The final keeper of the light was Hugh MacDonald, who retired in 1966, when the light was automated.

Rather than maintain the vacant dwelling that housed the light, a new concrete tower was constructed a short distance west of the 1913 lighthouse in 1967 by Schurmans Limited. This octagonal tower, with a height of 13.4 metres (44 feet) went into service on September 27, 1967, and today exhibits a three-second flash followed by an eclipse of two seconds every five seconds. The 1913 lighthouse, minus its lantern, is privately owned and remains in its original location.

For a larger map of Shipwreck Point Lighthouse, click the lighthouse in the above map.

From Route 16 at Naufrage, go north on Harbour Road for a short distance, and you will see the lighthouse on your left.


A rental property, known as Naufrage Lighthouse Cottage is available right by the Shipwreck Point Lighthouse.