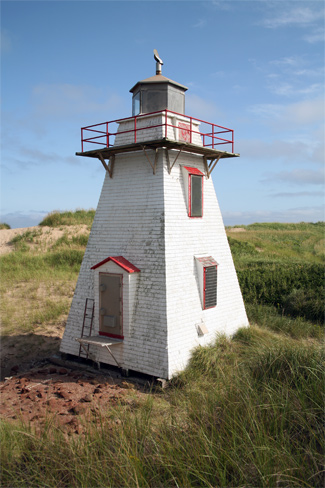 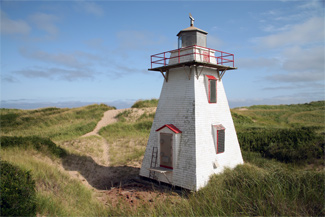 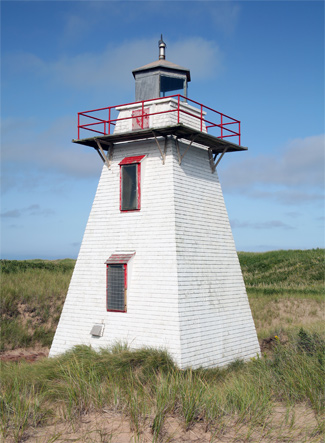 Range lights were placed at the entrance to St. Peters Bay on the northern shore of Prince Edward Island in 1868. These first lights were red beacons and most likely consisted of lanterns placed on masts, as in 1876 the agent of the Department of Marine and Fisheries for Prince Edward Island noted that he had received new lanterns and lighting apparatus for towers that he hoped would be constructed the following year. These plans, however, were delayed when the Engineer of Public Works notified the agent that a breakwater, which would likely alter the channel at the mouth of St. Peters Bay, was being contemplated.

After Parliament made an appropriation of $1,600 for range towers at the entrance of St. Peters Harbour, tenders were invited for their construction, and a contract for the sum of $550 was awarded to James Barclay of Ellerslie. The towers were completed in 1878 at a total cost of $1,031.12.

In 1888, the Annual Report of the Department of Marine and Fisheries records: A new inner range tower erected and an addition of ten feet made to the height of the old tower. The two towers were originally placed on the breakwater, but in 1896 the back range tower was moved north-westwardly along the flat sand beach, while the front range light was relocated 5.5 metres (18 feet) south-westwardly from the outer end of the breakwater. After the moves, which were performed by a Mr. Sennott at a cost of $70, the rear range light stood 444 metres (1,456 feet) southwest of the front light.

In the early 1900s the lights were relocated a couple of times, and a set of temporary pole lights were even put in use in 1921.

Eldon Drake, a World War II veteran and the last keeper of the range lights, became caretaker of the lights when they were electrified in 1963. This change saw Keeper Drakes annual salary fall from $490 to $150.

For a larger map of St. Peters Harbour Lighthouse, click the lighthouse in the above map.

From Route 2, just east of Morell, turn north on St. Peter's Harbour Road. After 2.1 km (1.3 miles) turn right on Lighthouse Road and follow it to its end where you will find St. Peters Harbour Lighthouse. Note that as you approach the lighthouse the road may become rutted and impassable, forcing you to walk the last portion of the road.