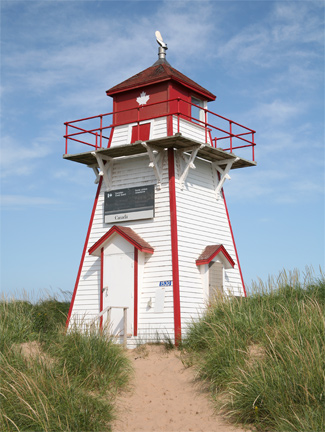 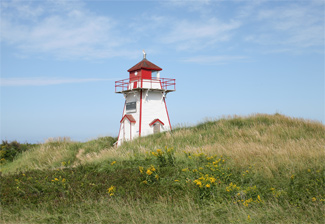 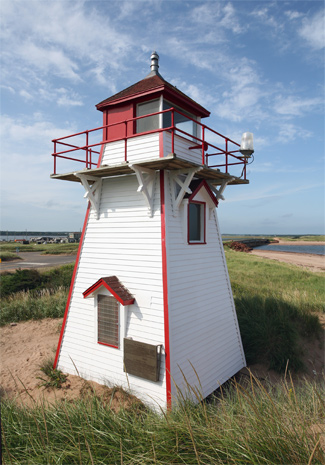 The 1893 Annual Report of the Department of Marine and Fisheries gives the following description of the Covehead Range Lights:

In response to a petition from fishermen, the back range light formerly situated on Black Point was moved to the beach in 1894, and a new block was built for the front range light. Both lights were then located on the beach on the west side of the harbour.

A set of movable range lights were constructed in 1917 under the supervision of G. L. Gaudin.

Lloyd Bell served as keeper of the range lights from 1926 until 1959, when the lights were electrified. As a keeper was no longer needed, Bell was hired as a caretaker at an annual salary of $100 instead of the $550 he was earning previously.

The present Covehead Harbour Lighthouse is 8.2 metres (26.9 feet) in height with a focal plane of 10 metres (32.8 feet) above the surrounding water and serves as a coastal light instead of a range light. The revolving bull's-eyed Fresnel lens in the lantern room emits a white 0.5-second flash followed by an eclipse of 4.5 seconds and was reportedly relocated from Dalhousie, New Brunswick.

The towers fog horn, which is maintained by the local harbour authority, points due north and, when needed, sounds a three-second blast followed by twenty-seven seconds of silence. The lighthouse was renovated in 1994 and covered with pressure-treated cedar siding.

A plaque on the side of the lighthouse provides the following on the Yankee Gale that struck on October 3, 1851 and claimed at least seventy-four ships and 150 lives:

The forenoon had been particularly balmy. Schooners had sailed into the shallow waters in search of Mackerel and Cod, but darkness found the vessels trapped in the stillness close to land. There was no breeze to carry them offshore. That evening a strong wind blew from the northeast. By midnight it had raged into a powerful gale.

For several days the wind and waves gathered strength. On the morning of the fourth day, the sea subsided. Battered ships were strewn along the north shore. Bodies of sailors and fishermen were entangled amongst the wreckage.

Many men were buried here in Prince Edward Island. Their graves are a silent reminder of the changing moods of the sea.

In March 2011, Pat and Keith Notman of Stanhope attended a meeting where Norman Shields, Manager of Heritage Lighthouse Program at Parks Canada, gave an informative presentation about the Heritage Lighthouse Act, which facilitates the transfer of lighthouses to communities or support groups. The couple formed Friends of Covehead Lighthouse, collected the necessary twenty-five signatures, and submitted a petition for the lighthouse to the Department of Fisheries and Ocean before the May 2012 deadline. The group has since received confirmation that the lighthouse is eligible for transfer under the program and now has until May 2015 to flesh out a business plan for the acquisition and the ongoing maintenance of the structure.

For a larger map of Covehead Harbour Lighthouse, click the lighthouse in the above map.

From Route 6, south of Stanhope, take Route 25 (Bayshore Road) north into town until it ends. Turn left onto Gulf Shore Parkway, and Covehead Harbour Lighthouse will be on your right after a short distance.


Just east of the lighthouse alongside the Gulfshore Parkway is Dalvay By-The-Sea, built in 1895 by Alexander MacDonald, a wealthy businessman and one-time president of Standard Oil Company. The mansion is now an inn with noted dining. The inn appeared in the movie Anne of Green Gables: The Sequel. Anne (Megan Follows) appears at the beginning of the movie riding her bicycle along a lake with the inn in the background. She proceeds to the beach where the pages of a manuscript she is reading are blown onto the lawn of the inn.