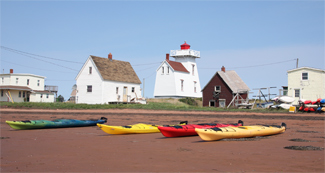 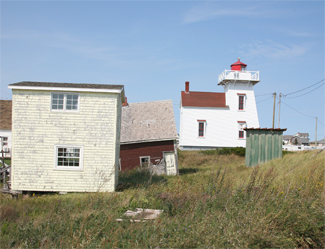 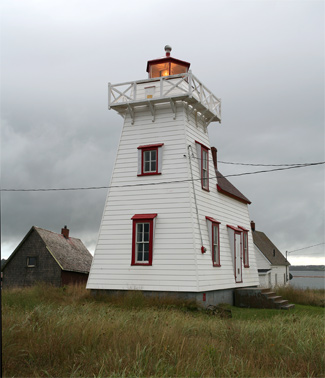 North Rustico, situated on the northern shore of Prince Edward Island facing the Gulf of St. Lawrence, was founded around 1790 by Acadians. The name Rustico comes from Rassicot, one of the first French settlers. Locally, the community is known as The Crick. North Rustico, with its picturesque harbour, has always been linked to the sea, and today, the fishing industry still drives the local economy. Lobster fishing is big during May and June, and tourists flock to local restaurants during the summer to enjoy a lobster supper, a north shore tradition.

The present North Rustico Lighthouse, which consists of a square wooden tower, 10.7 meters (35 feet) high and an attached dwelling, was built during the summer of 1876 by P. Carroll of Miramichi under a contract for $1,700. Due to the lack of lamps for the lighthouse, its lights, a white light in the lantern room and a red streak light in a window 4.9 metres (16 feet) below the lantern that could only be seen when vessels were in range with the channel, were not displayed until the spring of 1877. William Mitchell, the agent of the Department of Marine and Fisheries for Prince Edward Island, visited the lighthouse on August 4th of that year and found the lights in good order, and the building clean and satisfactory. Thomas G. Pursey was the first keeper of the lighthouse and served until 1892.

Before the erection of the lighthouse, a pair of range lights had been used to guide mariners into the harbour at North Rustico. M. Stevenson was paid £12 in 1868 for two lanterns, while Frederick Woolner was paid £5 for erecting posts. In 1874, a year after Prince Edward Island entered Confederation, the General Superintendent of Lighthouses visited the range lights, which were small lanterns raised on masts separated by 82 metres (270 feet), and determined that a tower should be constructed in the interest of navigation.

William Mitchell visited the lighthouse again in 1878, when three flat-wick mammoth lamps, one circular-burner and most powerful 20-inch reflectors were in use. Mitchell noted that Keeper Pursey was very trustworthy, and that the lights were always found in good order.

During the winter of 1883-1884, the lighthouse was relocated 155 metres (510 feet) from its site on the middle of the beach to the north side of the entrance to the harbour. Its lower red light was discontinued and replaced by a red dioptric light hoisted atop a mast 69 metres (225 feet) in front of the lighthouse. The upper light in the lighthouse thus became the back light of a range, still showing a fixed white light. Stephen McNeil was paid $150 to move the lighthouse, while James Barclay was paid $130 to build the front range light.

In 1887, a heavy easterly gale undermined the foundation of the front range light, imparting a dramatic lean to the structure. As a result, the red light was once again shown from a window in the tower of the lighthouse for a time to form the range.

North Rustico Lighthouse itself was being threatened by the sea in 1895, so tenders for protection work were requested, and a contract was awarded to Thomas G. Purser, who submitted the lowest bid. A block of square hemlock timbers, measuring 9 metres (30 feet) by 4.5 metres (15 feet) and having a height of 1.5 metres (5 feet), was constructed and the lighthouse was placed thereon. In addition, one hundred feet of close piling was laid to protect the shore. The piles were 6 metres (20 feet) long and were driven 2.4 metres (8 feet) to 3.7 metres (12 feet) into the ground. The total cost for the work was $527.

This work still wasnt enough to protect the lighthouse, as it was undermined and capsized during a heavy northeast gale on January 12, 1899. Joseph N. Pino, who was appointed keeper on February 6, 1897, was responsible for the light at the time. The lighthouse was moved back from the shore, repaired, and used as a coastal light instead of a rear range light. In its place, a mast light was erected to serve as the back range for entering the harbour. The total cost of the work, which was supervised by Milton Walsh, was $608.

George Pineau served as keeper of the North Rustico Harbour Lighthouse from 1925 until 1960, when the light was electrified and automated. The structure was leased as a summer residence from 1968 to approximately 1973. A modern light was erected in 1973, and the old lighthouse was declared surplus. Local residents became alarmed that the lighthouse would be destroyed or sold off, so they rallied to save the historic property. The Canadian Coast Guard returned the light to the lighthouse in 1976, and its beacon remains active today, sending out five seconds of light every ten seconds.

In 2012, Friends of North Shore Communities submitted a petition to assume ownership of North Rustico Lighthouse, which was made available under the Heritage Lighthouse Protection Act of 2010. During a meeting on October 3, 2012, two potential business plans for the lighthouse were presented. The first proposal envisioned the lighthouse being remodeled to serve as a rental cottage, while the second had the lighthouse serving as an information centre and retail outlet for local products. The first proposal was favored by a vote of eighteen to twelve, and it will be submitted to the Department of Fisheries before a November 1 deadline.

For a larger map of North Rustico Harbour Lighthouse, click the lighthouse in the above map.

From Route 6 in North Rustico, turn east on Harbourview Drive and follow it around the harbor for 1.8 km (1.1 miles) to North Rustico Lighthouse.