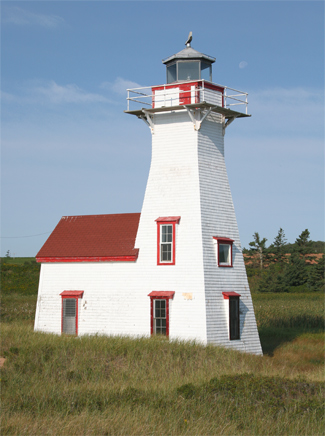 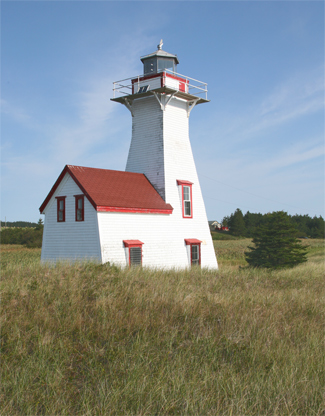 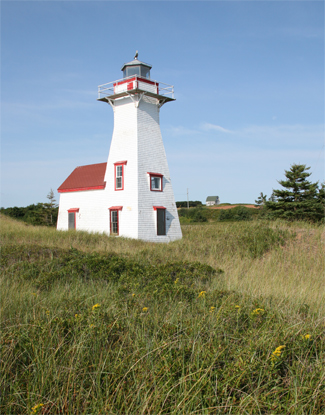 A year after Prince Edward Island joined the Confederation of the Dominion of Canada in 1873, the General Superintendent of Lighthouses visited the island to assess the status of its lighthouses. At that time, the range lights at New London were described as two small lanterns that were raised on day beacons, but the construction of a tower to replace them was recommended. The original range lights were built after a petition praying for a grant to help cover the cost of the beacons was submitted to the House of Assembly of Prince Edward Island in 1868 by George B. McKay and other inhabitants of New London. George McKenzie of French River was awarded a contract of $1,300 to construct the New London Lighthouse, work which he completed during the summer of 1876. The tower, which has a height of 13.3 metres (43.6 feet), is 4.5 metres (15 feet) square at the base and tapers to 2.3 metres (7.5 feet) square at the lantern room. A narrow, two-story dwelling is attached to the landward side of the tower.

George McKenzie must have been quite satisfied with the result of his work as he stayed on as keeper of the lighthouse for two decades. The lights in the tower were first lit on October 1, 1876. The light in the lantern room was originally fixed white, and a red streak light, visible only when vessels were in alignment with the channel, was shown from a window sixteen feet below the lantern room. In 1879, the streak was replaced by a separate front range light that was constructed near the entrance to New London Harbour by John McKay for $130, and the New London Lighthouse then started to serve as the companion rear range light. Shortly after the front range light was completed, it was struck by a heavy gale that carried the tower 183 metres (600 feet) westward, causing the lantern to be destroyed by fire.

In 1891, both the front range light and the main lighthouse were moved 61 metres (200 feet) southwest to place them nearer the channel and make them more useful in entering the harbour. James Burclay performed this work under contract for $110. Jonathan Delaney was hired to increase the size of the brush and stone protection work at the main lighthouse, which stood upon a cribwork foundation and was painted white and topped by a brown iron lantern.

One night in 1894, Keeper McKenzie was asleep in the watchroom just below the lantern room when a chimney in the lantern broke, causing the lamps to catch fire. The lighting apparatus was completely destroyed, and the tower was saved from total destruction only by the brave and energetic action of the keeper, Captain George McKenzie, who entered the lantern, all aflame with burning oil, and succeeded, unaided, in getting the fire out. Milton Walsh, foreman of works of general repairs for the Prince Edward Division of the Department of Marine and Fisheries installed a new light, while P. McMahon scraped and painted the lantern.

During the winter of 1902-1903, heavy ice grounded off the entrance to New London Harbour causing the strong current running out of the harbour to scour a new channel through the outer bar, northwest of the channel marked by the range lights. A new rear range light was hastily erected in the form of a fixed white light shown from a square lantern hoisted on a mast to serve the new channel. The New London Lighthouse remained in operation, showing a fixed red light as a coastal light. The following year, the channel shifted back to its former location, and the New London Lighthouse resumed its operation as the rear range light.

Five of Hugh John MacRaes nine children published a book entitled Living Under the Light that chronicles their childhood at New London Lighthouse. One of their memories was having to haul drinking water from a cottage located about 250 yards from the lighthouse.

Claude Adams took over as temporary keeper on December 1, 1940 and served until his death on January 23, 1943. His wife, Maisie Adams of French River, then assumed responsibility for the light, becoming one of the few women to mind a light on Prince Edward Island. Claude Adams fell ill with cancer shortly after taking charge of the light, so Maisie cared for the light along with the couple's three young children, one of whom was born at the lighthouse. After roughly four years at the lighthouse, Maisie moved with her children to French River so they would be closer to school, but she would still walk out to the lighthouse each evening and morning to tend the light. Maisie resigned in 1957, and William Roland Paynter was hired as temporary keeper on May 1, 1957 and served until the tower was electrified in 1958.

New London Lighthouse was rented from the mid-1960s to 2000, when the Canadian Coast Guard discontinued private leases of Prince Edward Island lighthouses. Garth Gunter used the lighthouse as a summer home during part of this time. The light remains active today helping guide vessels into New London Harbour.

For a larger map of New London Range Rear Lighthouse, click the lighthouse in the above map.

From Highway 6 in New London at the Lucy Maud Montgomery Birthplace, go north on Highway 20 for 6.9 km (4.3 miles) and then turn right on River Road (Route 263). Follow River Road until it ends, then turn right onto Cape Road and drive for 1.6 km (1.0 miles) to its end where you can park your car and walk down a dirt road to New London Range Rear Lighthouse.

It was only after returning home that I learned that Lucy Maud Montgomery was married at the museum, which is known as Silverbush and was the home of LMM's aunt and uncle. The Lake of Shining Waters is located next to Silverbush.