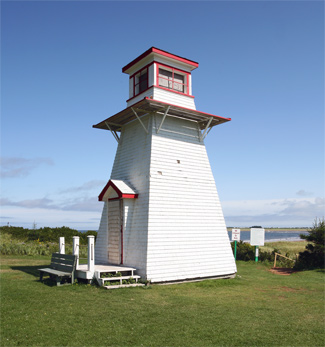 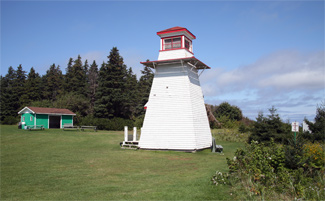 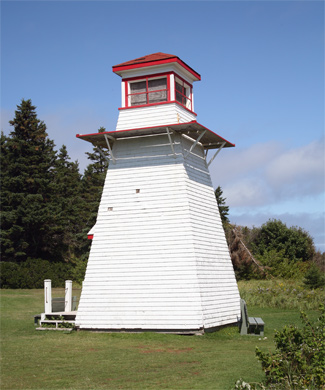 A few months after the disastrous Yankee Gale struck the northern coast of Prince Edward Island and wrecked much of the New England fishing fleet working offshore, Henry Palmer, the Consular Agent of the United States for the island colony, wrote to Lieutenant Govenor Alexander Bannerman on March 2, 1852 that many ship owners in the United States would be willing to contribute towards the erection of lighthouses at Malpeque and Tracadie harbours as fishermen had no protected anchorage on the north shore that could be safely accessed at night in the event of a sudden gale.

In 1853, every fishing vessel from the United States that visited the harbours on Prince Edward Island was required to pay an anchorage duty that was purportedly for the support of lighthouses. The Americans complained about this added tax, noting that their contributions should be sufficient to fully light the northern coast, which still hadnt received its first lighthouse. That same year, a letter from Captain Bayfield of the Royal Navy was presented in the House of Assembly recommending Bill Hook Island, also known as Fish Island, at the entrance to Richmond (Malpeque) Bay as the best site on which to place two lights to serve as harbour lights.

The recommendation was soon acted upon, and James H. Beckwith was paid £37 under contract to erect a lighthouse on Bill Hook Island. The light likely went into operation during the early summer of 1853, as Benjamin Thomson was paid an annual salary of £36 for keeping the light starting on June 16, 1853. Just two years later, a petition setting forth the failure of the Light placed on Fish Island to answer the ends designed in its establishment was presented to the House of Assembly by several local inhabitants. The petitioners further claimed that the light as constructed and managed at the time actually deceived the mariner.

A similar petition was again presented to the House of Assembly in 1857, and this one seems to have had the desired effect as £100 was appropriated for a new lighthouse on Fish Island. The second Fish Island Lighthouse was built by hired labour, primarily John Smallwood, under the direction of Silas Barnard, Supervisor of Public Works for the colony. In the middle of August 1857, Silas Barnard traveled to Fish Island to set the light house a-going, and deliver the same over to the keeper. Benjamin Thomson was still keeper at the time, but William H. McKay would replace him a few months later.

John Craig, who served both as keeper of the Fish Island Lighthouse and collector of light duties for Richmond Bay, submitted a report in 1861 that read in part, I hereby forward  a copy of names of Fishing Vessels, which are in the habit yearly of frequenting the Port of Richmond Bay during the Fishing season, and which derive all the advantages of the Light and Harbor accommodations, whenever they feel inclined to put in for safety or otherwise, and whose Captains have declined and positively refused paying their Light dues. These light dues were used to support the colonys lighthouses, and Keeper Craig feared that if something wasnt done to force compliance all vessels would refuse to pay.

In 1874, a year after Prince Edward Island joined the Confederation, the General Superintendent of lighthouses visited the islands lighthouses and gave the following assessment of Fish Island Lighthouse. The light-house at this station is a slight wooden structure not worthy of repair, and the dwelling-house has been abandoned as unfit for use. New lamps and reflectors were supplied to this light-house, but it will be necessary to erect a new light-house, dwelling and oil store at this station, and also to establish a beacon range light.

A contract for $1,987 to construct the new lighthouse and range light on Fish Island was awarded to Thomas Fahey of Alberton in 1875. Work on the project was carried out during 1876, and the new lights were put in operation at the opening of navigation in 1877. The lighthouse was a white, square, wooden building, with a height of 14 metres (46 feet), and was attached to a small, one-and-a-half-storey dwelling. The companion range light, an open-frame tower, stood at a distance of 366 metres (1,200 feet) from the main light and indicated the proper channel for crossing the bar.

Though newly constructed, the lights required the constant attention of a dedicated keeper in order to be effective. In 1878, William Mitchell, the islands agent for the Department of Marine and Fisheries, visited the station, which he called most important since it was at the entrance of the best harbour of refuge on the north coast, and was displeased with its condition. Mitchell recorded in his annual report, Mr. Angus J. McLellan is keeper, who is neither energetic nor careful; I must say that the lights were not satisfactory.

As the best channel into the harbour shifted over time, the range light had to be occasionally relocated. In 1887, the range light was moved 6 metres (20 feet) south to range clear of a bank on the north side of the channel, and in 1894 it was moved again to range clear of a sand spit making out from Darnley Point. The supply steamer Prince Edward called at the station in 1893, and its crew constructed a new boathouse and launching ways.

An additional range light was established on Fish Island on June 1, 1895 to range with the main light and indicate the entrance to the channel leading to Darnley Basin. This was a red light, displayed from a lantern hoisted on a mast, and was in service until 1897, when the Darnley Basin Range Lights were established on the mainland to serve the same purpose.

The 1876 Fish Island Lighthouse no longer exists. In 1961, the skeleton tower with an enclosed upper portion that stands on the island today was erected. This metal tower stands 15.2 metres (50 feet) tall and serves as the back or rear range light for what the Canadian Coast Guard now calls the Malpeque Harbour Approach Range Lights. In 1965, an enclosed square, wooden tower was serving as the front range light.

The abandoned front range tower on Fish Island was threatened by shore erosion in the late 1980s. The Department of Transport considered burning the structure, but locals stepped in and proposed a plan to save the historic tower. Bill Auld, president of the Malpeque Historical Society, and fisherman Keith Davidson sawed the tower in half, and members of the Search and Rescue Crew of the Canadian Forces Base at Summerside used a Labrador helicopter in 1989 to transfer the two sections to Cabot Park, where the lighthouse was reassembled and restored.

The surviving wooden Fish Island Lighthouse in Cabot Park appeared in the Canadian television series, Emily of New Moon, which aired on CBC Television from 1998 to 2000. The series was based on a book of the same title penned by Lucy Maude Montgomery, who grew up on Prince Edward Island and also authored the more well-known Anne of Green Gables.

For a larger map of Fish Island Lighthouse, click the lighthouse in the above map.

From Kensington, take Route 20 north and after roughly 10.9 km (6.8 miles), when Highway 20 makes a hard right, continue straight on Malpeque Road, which will make a hard left, and then turn right on King Street and follow it to Cabot Beach Provincial Park. Once in the park, follow signs to the right (for the beach and day-use picnic area) to find the relocated Fish Island Lighthouse.


Lighthouses are not the only interesting structures on Prince Edward Island. I was amazed at the impressive churches we passed in some of the smaller towns around the island. One stunning example is St. Mary's Church in Indian River that we passed on our way to Cabot Beach Provincial Park.