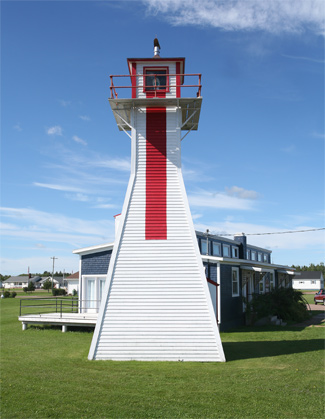 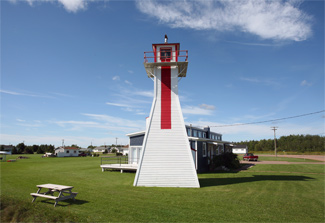 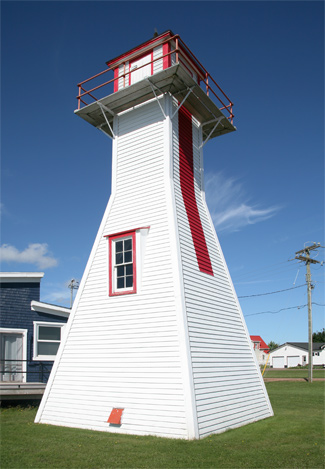 To indicate the channel over the bar at the entrance to Cascumpec Harbour, range lights were first established on Sandy Island at the mouth of the harbour. Then, in 1885, two lights, known as the Alberton Range Lights, were established at the head of Cascumpec Harbour to help guide vessels up the harbour. The new front range light consisted of a lantern showing a fixed red light at an elevation of 6.7 metres (22 feet), while the rear light or back range, located a half mile west of the front light, was an open-framed tower, through the roof of which a lantern was hoisted on a mast to a height of 12.2 metres (40 feet). James Keefe built the lights under a contract for $1,900. The Alberton Range Lights were elevated an additional 3.4 metres (11 feet) in 1887 to increase their range, and the following year new lanterns and reflectors were installed to increase the power of the lights.

On November 11, 1896, the Alberton Range Lights were discontinued as they no longer marked the best channel through the bar at the mouth of the harbour. A black spar buoy was placed near the new bar crossing, which was about ¼ mile north of the location marked by the range lights.

The Department of Marine and Fisheries erected a new pair of range lights inside the harbour the next year and included the following description of them in its annual report.

The range lights in Cascumpeque Harbour, on the north of Gulf of St. Lawrence coast of Prince Edward Island, which had been temporarily discontinued and again put in operation on the 15th June, 1897, and which will hereafter be known as the Northport range lights, have been improved by substituting for the masts heretofore used open skeleton lighthouse towers, and by changing their position, to give a better lead through the existing channel.

Each tower is an open framed wooden building surmounted by a square wooden lantern and has its side facing the channel slatted to make it more conspicuous as a leading mark. The whole building is painted white. The lights are as heretofore fixed red and should be visible three miles over a small arc on each side of the line of range.

The front range tower stands on the bank 990 feet W. ¼ N. from the position formerly occupied by the front range mast near the outer end of the Queens Wharf. It is 29 feet high from the ground to the vane on the lantern. The light is elevated 31 feet above high water mark.

The back range stands 1125 feet W. ¼ N. from the front one, it is 41 feet high and the light is elevated 42 feet high above high water mark.

Two additional range lights have been established on Savage Island, inside the sand hills on the south side of Cascumpeque Harbour. The lights are fixed white catoptric lights, shown from lanterns hoisted on masts, with a small hut at the base and a diamond shaped day beacon at the head of each mast, the whole structure painted white.

Vessels entering Cascumpeque Harbour keep the Savage Island range lights in one until the Northport range, being careful not to overrun the line of range, as the channel at the point of intersection is narrow and the tide strong.

The Northport range leads in to the wharf clear of all obstructions.

In 1899, the Savage Island Range Lights were relocated along with the main Cascumpec Lighthouse to the sand hills on the south side of the entrance to the harbour, but in 1891, the position of the channel over the bar shifted dramatically during winter storms, forcing the range lights to be moved to Sandy Island, on the north side of the entrance near where the main Cascumpec Lighthouse formerly stood. Mariners were then advised to use the range lights on Sandy Island to cross the bar and to keep that range until the Northport Range Lights were in alignment.

In 1903, the towers which formed the Northport Range were enclosed and painted white. A new front range light was installed in 1962, and the structure formerly used for the front light took the place of the rear tower. The former rear range tower was sold and incorporated into a dwelling. The height of the rear range tower was increased by 1.8 m (6 feet) in 1970, which resulted in the structure having its unique long neck.

Northport Community Council has submitted a petition for ownership of the lighthouse under the Parks Canada Heritage Lighthouse Program.

For a larger map of Northport Range Rear Lighthouse, click the lighthouse in the above map.

From Route 12 (Church Street) in Alberton, turn south on Main Street and continue for 3 km (2 miles) on Highway 152 to Northport where you will find Northport Range Rear Lighthouse just past the marina and adjacent to Northport Community Centre.