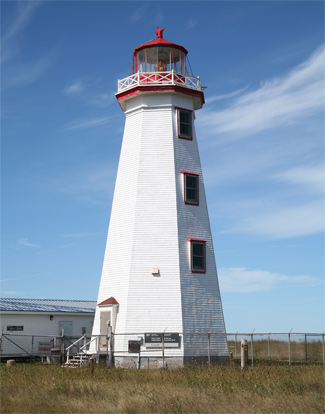 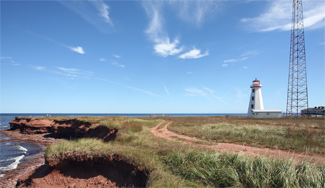 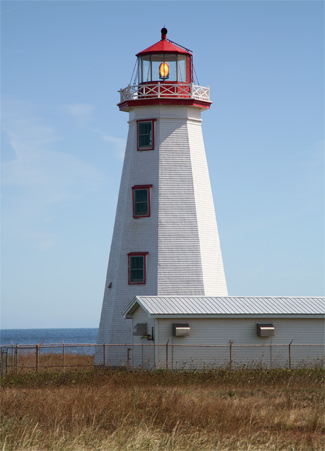 A long, rocky reef, purported to be the longest in North America, extends seaward from the northeast tip of Prince Edward Island for roughly 2.4 km (1.5 miles) and marks the dividing point between the Gulf of St. Lawrence and Northumberland Strait. The following report issued in 1834 was likely the first formal call for a lighthouse on North Cape to mark this navigational hazard.

On the N.W. point of Prince Edward Island, a light would be highly useful to vessels who crossing the Gulf are forced down in the bight by violent N.E. winds. The rapidly increasing trade of Miramichi and the many rising settlements in the Strait of Northumberland, would also well justify the erection of a Lighthouse there.

A petition from ship owners and ship masters of the ports of Richmond Bay and New London setting forth the necessity of a light on North Cape for the safety of shipping was presented to the House of Assembly of Prince Edward Island in 1840. The petitioners prayed that the government of the island and neighboring colonies would contribute towards the erection and future maintenance of so desirable an object. The following year the House passed a resolution calling upon the Lieutenant Governor of Prince Edward Island to enter into communication with the Imperial Government, and the governments of the adjoining colonies and the United States to determine if they would be willing to contribute a portion of the funds to cover the cost and maintenance of a light on North Cape.

A decade later, in 1851, the House of Assembly called upon the Lieutenant Governor to enter into communications with the several Governments of Canada, New Brunswick, Nova Scotia and Newfoundland, and with the Imperial Government, both as respects themselves and the United States, with the view of ascertaining what proportion they will contribute to the expense of establishing Light Houses at the North Cape and East Point of this Island: as such establishments, at those places, would be of greater utility to the shipping interests of the Countries referred to, than to the similar interests of this Colony.

Nova Scotia did send a reply saying that Prince Edward Island had failed to pay money promised for the construction and maintenance of lighthouses in its colony, so they were disinclined to contribute.

Frustrated by the futile attempts to obtain a lighthouse for North Cape, David Petrie placed a light on the edge of the cape in 1861. The following year, a petition was presented to the House praying for a small grant to remunerate Petrie for his work, noting that the present depressed state of Commerce and Finance could not justify the erection of a proper lighthouse.

Finally, in 1865, £500 was appropriated for a new lighthouse on North Cape. This alone was not enough for the intended lighthouse, but it is certain that New Brunswick contributed funds and other governments likely did as well. A contract for the sum of £600 was made with John McLellan for the lighthouse, while Joseph Pope & Co. of Liverpool was paid £611 for a lighting apparatus. Thomas Alley, Superintendent of Public Works for the colony, noted that the tower was completed in the fall of 1865 but could not be put into operation as the lantern had not arrived. The superintendent called the tower a substantial building that stands about 76 feet above the level of the sea and reflects great credit on the builder. The lantern was declared to be of very superior construction. In fact, the superintendent boasted that there was not a lantern to compare with it in the Lower Provinces. He closed his report on the lighthouse by stating,  I hope that some intelligent person may be appointed keeper.

A £190 contract for the construction of a keepers cottage and a fence of cedar for the grounds of the North Cape Lighthouse was given to John Chiasson in early 1866.

A year after Prince Edward Island entered Confederation, the General Superintendent of Lighthouses visited the North Cape Lighthouse in 1874 and called it one of the most important light stations on the Island. The illuminating apparatus at that time was a fourth-order lens, but the light was deemed not of the power and character that its importance demands. The following year, this problem was corrected when a powerful revolving white light on the catoptric principle was installed and placed in operation on July 1, 1875. The light produced a single flash every minute, and the new lantern, revolving apparatus, lamps, and reflectors cost $2,339.42.

In 1945, it was noted that the North Cape Lighthouse and dwelling needed to be moved back from the edge of the nearby cliff, which had seriously eroded in recent years. Four years later, the move had not occurred, and by that time the dwelling was unfit for habitation. When winds were on shore during cold weather, sea spray would freeze on the dwelling creating a heavy coating of slush and ice. At times, this ice buildup sealed the keeper inside the dwelling, forcing him to chop his way out.

North Cape Lighthouse was automated in 1967, and the following year the 1950 dwelling and two sheds were sold off as surplus. Though the tower is not open to the public, tourists are still drawn to North Cape, where they can walk out on the reef at low tide, marvel at the wind turbines at the Atlantic Wind Test Site, or visit the gift shop, restaurant, and aquarium in the North Cape Interpretive Center.

Tignish Initiatives submitted a petition for ownership of the lighthouse under the Parks Canada Heritage Lighthouse Program. On September 25, 2013, North Cape Lighthouse was awarded a Provincial Designated Heritage Place plaque and certificate.

For a larger map of North Cape Lighthouse, click the lighthouse in the above map.

Take Highway 2 to Tignish near the northwest tip of Prince Edward Island and then take Dalton Avenue towards the shore. When Dalton Avenue ends, turn left onto Route 12 and follow this road to the northern tip of the island, where you will find North Cape Lighthouse just past North Cape Interpretive Center and near Wind Energy Institute of Canada. There is a restaurant and gift shop in North Cape Interpretive Center.


I had never heard of Dulse, a dried red seaweed that is used as a food condiment, until a trip to Prince Edward Island. Nor had I seen anyone harvesting Irish moss until a visit to North Cape Lighthouse. While at the lighthouse, I first saw a guy gathering the moss, which grows close to shore and is used as a stabilizing agent in toothpaste, shampoo, cosmetics, chocolate milk, ice cream and some pharmaceuticals, by towing a metal basket behind him in the surf. This yielded quite a bit of moss, but then a guy showed up with a black horse and a bigger basket, and he was able to quickly harvest even more.