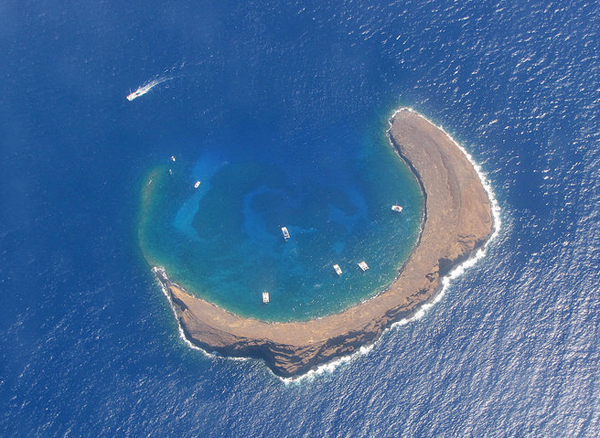 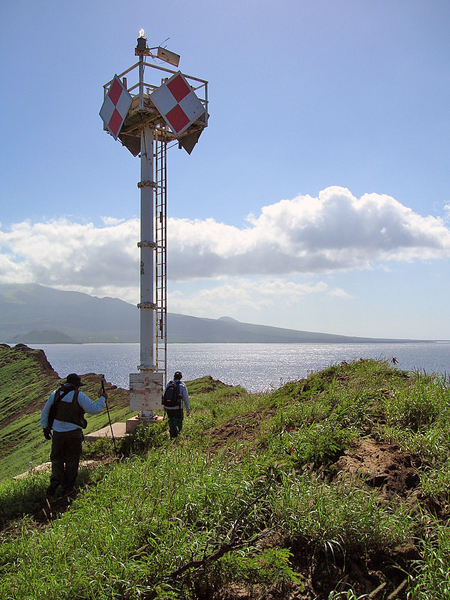 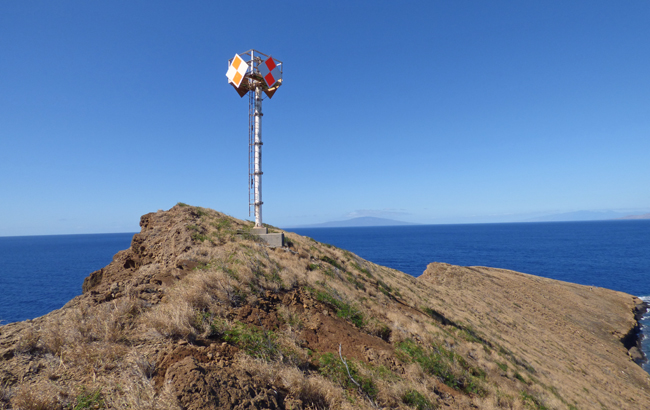 Early each morning, a flotilla of boats departs Maui bound for Molokini, Hawaiis premiere snorkeling destination. Once secured to a mooring inside the crescent-shaped crater, the vessels disgorge their sun-starved tourists, equipped with flippers, masks and snorkels, to enjoy a colorful array of coral and marine life. Molokini is often billed as one of the top ten dive spots in the world, but that ranking is most likely a measure of Molokinis popularity not natural beauty, even though the visibility is typically 150 feet or better inside the crater. During daylight hours, Molokinis height of 160 feet above the ocean makes it easily visible, but at night, it poses a navigational hazard for interisland navigation. The Lighthouse Board first proposed a light for Molokini in 1905, but funds were not allocated for the project until five years later. On September 13, 1910, Walter Francis Frear, governor of the Territory of Hawaii, reserved the entire eighteen-and-a-half-acre island of Molokini for lighthouse purposes.

In 1911, a sixteen-foot-tall, skeletal tower was erected on the southwest rim of the crater where it had a focal plane of 173 feet above the water. The towers automated light, which went into service on March 11, 1911, was powered by acetylene and emitted a white flash every three seconds. The Lighthouse Service Bulletin noted that on March 18, 1921, Molokini Light, the first compressed acetylene gas light established in the Hawaiian Islands, completed ten years of service without having been extinguished.

In October 1925, Ralph Tinkham, superintendent of the Nineteenth Lighthouse District, dispatched the tender Kukui to replace the Molokini light tower. The framework in the present tower, Tinkham noted, has deteriorated and we shall not only construct a new one, but shall also raise the height from 173 feet to 187 feet as complaints have been received from time to time that the light is hidden by a jutting piece of land to the north. The new light will raise it above this obstruction.

Molokini Light burned for nineteen years and eight months without being extinguished. As the light flashed every three seconds, this amounted to approximately 207,000,000 flashes during this period. The lantern and flasher were exchanged for overhauling and cleaning about every four years. This impressive record of continuous service ended in November 1930, when either an air pocket or acetone in the gas line caused the light to go out.

This second light marked Molokini for twenty-two years until it too succumb to the elements and was replaced in 1947 by a twenty-five-foot skeletal tower, which displayed an electric light powered by batteries stored in a shack built inside the base of the tower. In April 1989, a powerful storm packing winds of over sixty miles an hour toppled the 1947 tower and sent it tumbling down the crater. Members of the Coast Guard ANT team were soon helicoptered to the island to erect a temporary beacon and later the metal pole and solar powered light that grace Molokini today.

For a larger map of Minor light of Maui - Molokini Lighthouse, click the lighthouse in the above map.

The easiest way to see the Molokini Light is on one of the numerous Molokini snorkeling trips offered by various companies. Landing on Molokini is not permitted as the island is a seabird sanctuary.

The light is owned by the Coast Guard. Grounds/tower closed.


There are differences between the numerous Molokini snorkeling trips offered on Maui. First, the length of the trips vary greatly. Some excursions stop only at Molokini while others allow a chance to snorkel at Turtle Town or Turtle Arches as well. Some provide a cooked meal, others a sandwich buffet or just snacks. One vessel departs from the beach just a few miles from the crater, while others spend a significant amount of time traveling to and from the crater, which during the winter months can offer a chance to do some whale watching.

I would recommend taking a morning trip and booking a vessel that stops at both Molokini and Turtle Town. I had never snorkeled with turtles before, and for me, the second stop at Turtle Town was the highlight of the trip.