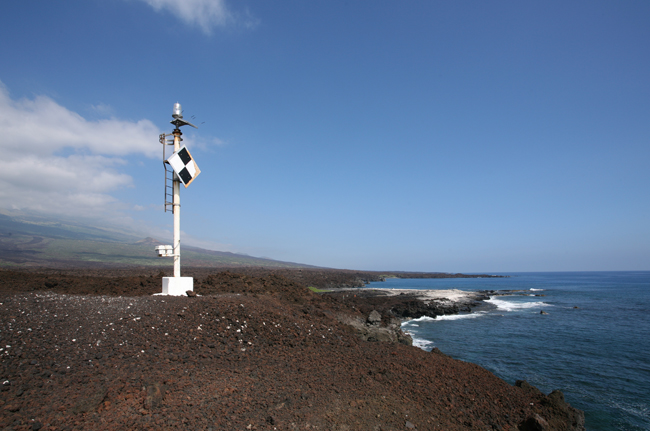 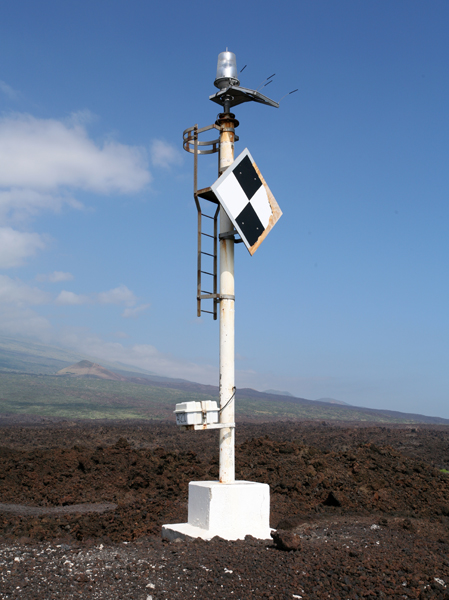 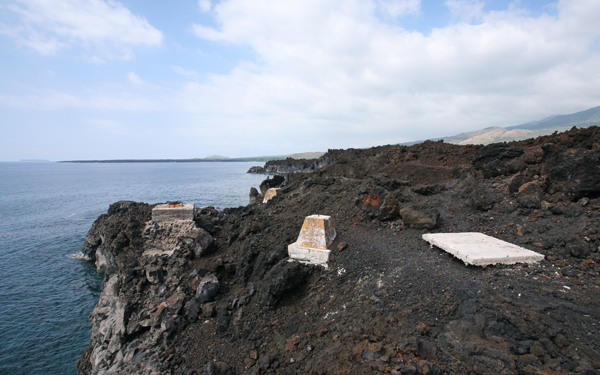 Over the years, several lights have marked Mauis southernmost point, which surrounds La Perouse Bay and is known as Cape Hanamanioa. In 1884, the Hawaiian government established a beacon on Kanahena Point, just northwest of La Perouse Bay, to complement the light that had earlier been activated at Lahaina. J. Andersen was the first keeper assigned to the light, and as the cape consists mainly of black lava, a keepers dwelling was built for him three miles away in the village of Makena. A light was placed in service at Makena in 1886 to mark an anchorage used mainly by a nearby sugar mill, and a second keeper, also residing at Makena, was responsible for it. P.W. Simeona wrote to the Department of the Interior in 1888 and requested that he be appointed keeper of Kanahena Light, as the foreigner (Keeper Andersen) was neglecting the light and selling pigs on the side. Simeona did not receive the position, and in 1896, Andersen wrote to the minister of the Interior and requested an increase in salary. In the letter, Andersen explained that he had by the raising of hogs and some other minor industries been enabled to live and support his family on his salary of twenty dollars a month, however, the overwhelming growth of Lantana now made the raising of hogs impossible. Andersens request was not granted, and he continued to receive the same salary for at least six more years.

The 1904 report of the Lighthouse Board contains the following description of Kanahena Point Light.

This is a fixed white light, composed of two ordinary kitchen lamps, estimated to be 50 feet above high water. The light is shown from a pyramidal room built at the top of a square wooden trestle tower 40 feet high. The trestle is in bad condition. The light marks a low lava spit projecting into the sea. It was erected because of wrecks on this point. There is no dwelling for keeper at the light-house. The keeper lives 3 miles away and is compelled to cross the rough trail over the lava flow.

The trestle tower was replaced in 1905 with a thirty-four-foot mast topped with a platform from which a lens lantern was displayed. Andersen remained keeper of Kanahena Light until his passing in 1910, when his wife assumed responsibility for the beacon, making the six-mile roundtrip trek each morning and night. Charles K. Akana became keeper of the light in October 1910.

Both the Makena and Kanahena Lights were discontinued in 1918 when the Hanamanioa Light was established on the southeast point of La Perouse Bay. This new tower was a pyramidal tower of reinforced concrete, like the surviving tower at Lahaina, and had a focal plane of seventy-three feet above the water. The light, run on acetylene, was automated from the beginning and a wooden derrick was built near the site to facilitate the landing of acetylene tanks and supplies at the cape.

For a larger map of Minor light of Maui - Hanamanioa Lighthouse, click the lighthouse in the above map.

From Wailuku/Kahului, drive south on Highway 30, and then bear left onto Highway 31 towards Wailea. Follow the road south past Wailea, to Makena, and then continue until it ends at La Perouse Bay. Here you can park and hike around the bay to the Hanamanioa Light.