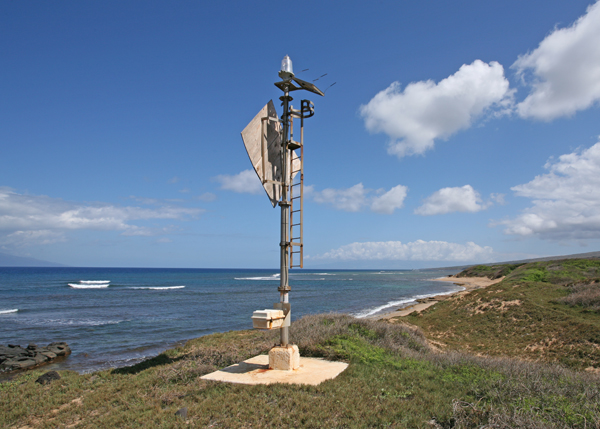 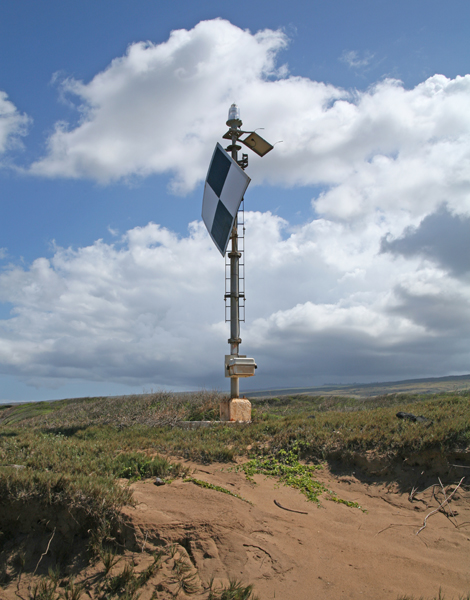 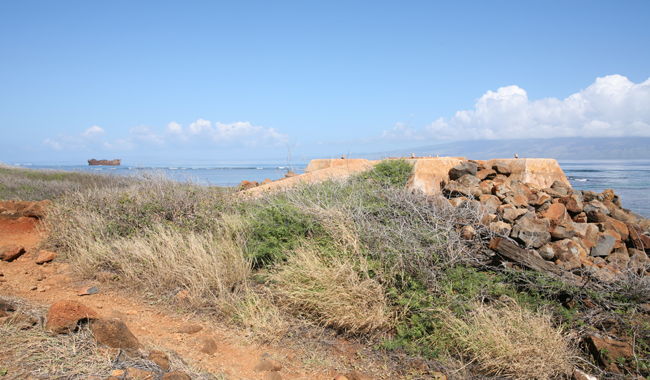 In 1925, Ralph Tinkham, Superintendent of the Nineteenth Lighthouse District, dispatched the tender Kukui to locate a site for a lighthouse on the northeast shore of Lana'i. A short time later, the Maui News carried the following report on the planned lighthouse at Laewahie on Shipwreck Beach.

The construction of a light at Wahie...will fill a longfelt want according to local shipping men. At present vessels bound through Auau Strait, between Lanai and Maui, steer a course off Molokai coast instead of a direct course which would bring them close to the shore of Lanai and so place them in jeopardy because of the sweep coming in from Pailolo Strait, between Molokai and Maui towards Lanai. With a light on Lanai ships will be enabled to steer a straighter course and know their exact position off Lanai coast at all times. This will mean a saving of time in steamer schedules, also.

According to lighthouse author Love Dean, this light was never built, but near the proposed site on what is now called Shipwreck or Kaiolohia Beach is a cement foundation referred to by many as "lighthouse ruins." The initials of three individuals, the name of a fourth, and the date 11/28/29 can still be easily read in the cement footings. One set of initials is NWW and most likely refers to N. W. Wetherby, who was an assistant lighthouse engineer responsible for construction field work during that time period.

In 1930 newly appointed Superintendent Frederick A. Edgecomb announced plans to built a light at Pohakuloa Point, a few miles west of Laewahie, where there was an opening through the reefs. This light was apparently never realized until 1968, when the northern coast of Lana'i received a light in the form of a metal pole at Pohakuloa Point, the northernmost point on Lana'i.

For a larger map of Minor light of Lana'i - Pohakuloa Point Lighthouse, click the lighthouse in the above map.

To view the lighthouse ruins, take the paved road north out of Lanai City and follow it until it ends at the beach on the northern shore of the island. Turn left when you reach the beach and continue on the sandy road until it ends after 1.5 miles. Park here and hike west for just over a half mile. A good view of the shipwreck, actually a ferrous-concrete oiler built during World War II and left here after the conflict, can be had from the lighthouse ruins.

To reach Pohakuloa Point Light, you can hike six miles west from the parking area at Shipwreck Beach or attempt to drive closer to the light. If you drive to Garden of the Gods near the western end of the island, you will find a dirt road named Awalua that leads downward to the northern shore of Lana'i, ending a mile or so from the light. Rental Jeeps, however, are not permitted on this road. If you continue west from Garden of the Gods to Polihua Beach, you can park there and hike 3.5 miles east to reach the light. This is the option I used. The hike is a bit arduous requiring lengthy treks through loose sand, but beachcombing and watching for breaching whales offshore made the time pass somewhat quickly. There is also a second shipwreck, known as the Awalua Shipwreck, that is located near where Awalua Road reaches the beach.