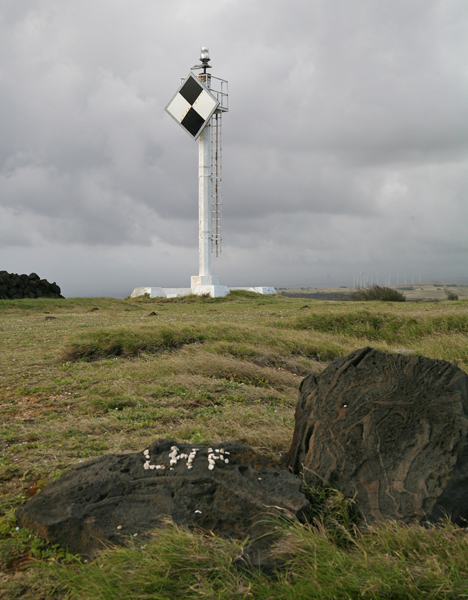 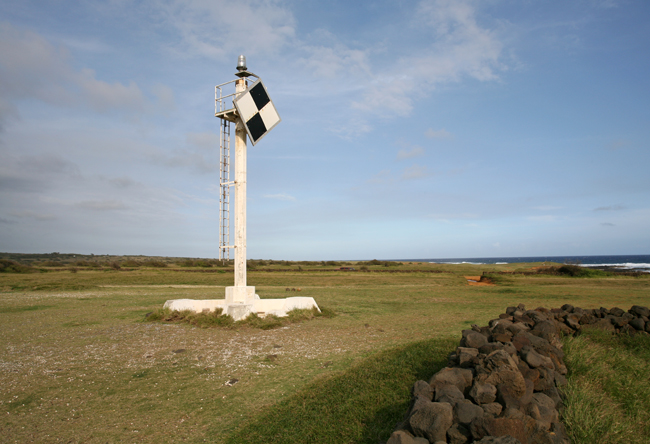 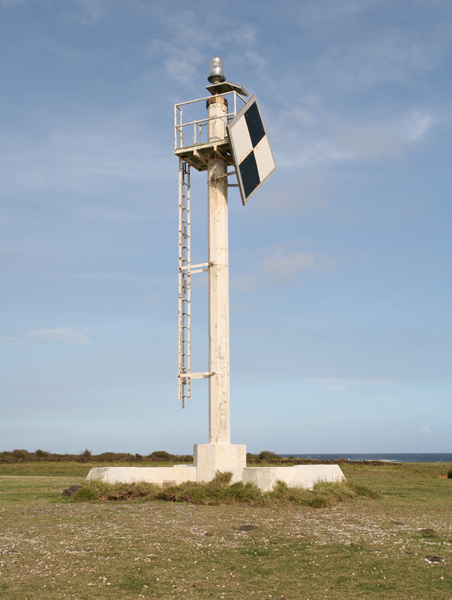 A beacon to light the Big Islands southernmost point, known as Ka Lae (the point) in Hawaiian, was first proposed in 1883, but the Hawaiian Government provided no appropriation for the request. When the Lighthouse Board assumed responsibility for the navigational aids of the Territory of Hawaii in 1904, six years after the islands became a U.S. territory, it first focused on repairing or rebuilding existing lights on the islands and then requested money in 1905 for a new beacon at Ka Lae. A lens-lantern supported by a thirty-four-foot wooden mast was ready for display on March 5, 1906, and its light, produced by incandescent oil vapor, was visible for nine miles. A small service house was built at the base of the mast, but no accommodations were provided for the keeper.

In 1907, Captain C. W. Otwell, the army engineer working with the Lighthouse Service in Hawaii, visited Ka Lae, also known as South Point, and made the following report.

This station is isolated and desolate, the locality being only a waste of rough lava rock. No quarters have been provided for the keeper. The only line of supply is over a rough trail, the nearest water and provisions being ten miles distant. To provide at least temporary relief from the hardship to which the keeper is exposed, $200 worth of materials were purchased for the construction of a shelter and water tank. A suitable dwelling should be constructed at thissouthernmost point of the Hawaiian Islands. The light is important, and the keeper should have this inducement to remain.

The first keeper of the light was John T. Nakai, who could trace his family lineage back to two brothers who lived at Ka Lae and were supposedly important fishermen for Kamehameha I. Before a dwelling was built for him, Keeper Nakai lived in a small pyramidal dwelling that he had built near the light.

Just over ten acres of land on Ka Lae were set aside for lighthouse purposes by a proclamation signed by President Theodore Roosevelt on December 4, 1908, and work soon began on a dwelling for the keeper. Hearing of the proposed construction on Ka Lae, Professor William Tufts Brigham of the Bishop Museum on Oahu wrote to Governor Frear and requested that care be taken to not damage the ancient heiau (Hawaiian temple) on the point. The temple was reportedly the only one where the native religion was still practiced, and Captain Otwell gave his assurances to the governor that the heiau would not be disturbed.

On January 14, 1921, Keeper Harry W. Flint sent the following report to his superiors:

I respectfully report that for the past 10 days this station has been enveloped with smoke, at times so dense that nothing could be seen a mile from the station.

Apparently this smoke from the volcano of Kilauea, which appears from the station to be very active at present, assisted also by a strong north-northeast gale that has been blowing here for the last two weeks.

Ka Lae Light is located roughly thirty-five miles southwest from Kilauea Volcano. In May 1924, Keeper Flint sent a letter to the superintendent of lights for Hawaii that read in part for the last 10 days this station has been enveloped with clouds of smoke and ashes. Every night the lens has to be lowered down to clean off the ashes. South Point is exposed and one of the most windy points in Hawaii, having an estimated average wind velocity of fifteen miles per hour. In 1928, a new forty-five-foot, steel tower was installed at the point, and its beacon was connected to storage batteries charged by a wind-driven electric generator, making Ka Lae Light the second wind-powered lighthouse in the U.S. Lighthouse Service. A gasoline-powered generator was also located at the station to provide electricity for the light and dwelling if the wind-generated power was not sufficient. During the first year of this new system, the backup gasoline generator only had to run for about fifty hours.

Ka Lae Light was automated in 1949, and the forty-five-foot tower was replaced by the present thirty-two-foot concrete pole in 1972. Today, batteries charged by solar panels power the light.

Though the light is no longer wind-powered, the Kamaoa Wind Farm, consisting of thirty-seven wind turbines with a peak output of 7.5 MW, operated on the point from 1987 until 2006. A new stand of turbines was completed in 2007 about 1.5 mile distant from the former turbines. Consisting of fourteen General Electric turbines, the Pakini Nui is capable of producing about 21 MW, enough electricity for 10,000 homes.

For a larger map of Minor light of Hawai'i - Ka Lae Lighthouse, click the lighthouse in the above map.

From Highway 11 on the southern side of the Big Island, turn south onto South Point Road and continue for 10.5 miles to its end, where you will find Ka Lae Light.


In case you are curious or a bit of a techie, the large dish on the point is owned by Swedish Space Corporation and is used for the tracking and control of satellites.