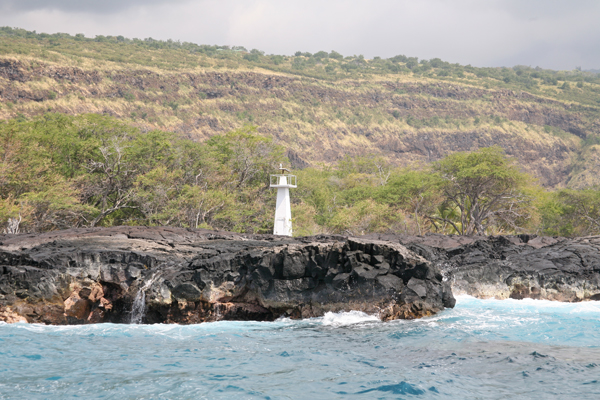 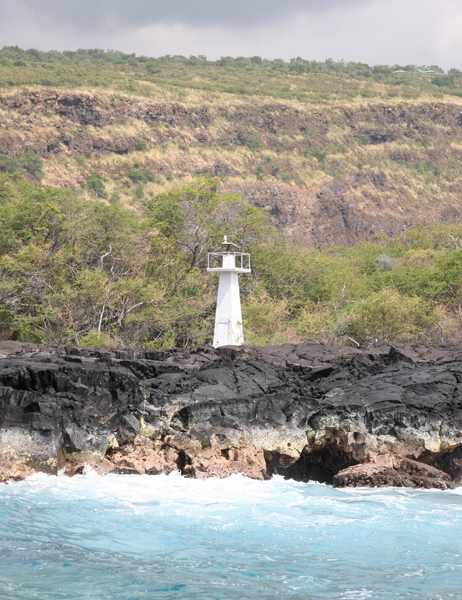 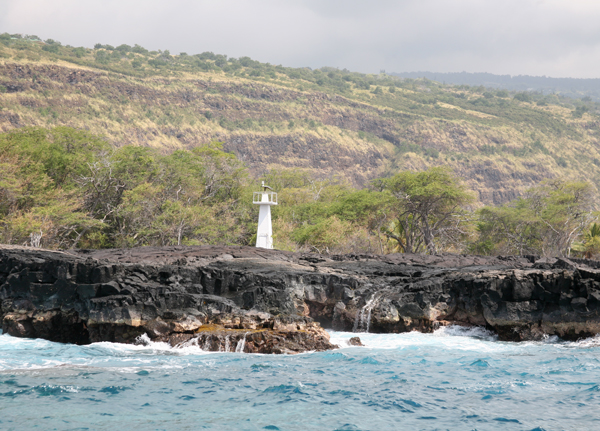 A white obelisk on the north shore of Kealakekua Bay bears the following inscription:

In Memory of
The Great Circumnavigator
Captain James Cook, RN
who
discovered these islands
on the 18th of January, AD 1778
and fell near this spot
on the 14th of February, AD 1779.
This monument was erected
in November AD 1874
by some of
his fellow countrymen.

Captain Cook embarked on his third voyage of discovery in 1776 aboard the Resolution, and, after a stop in Tahiti to return a native picked up during his previous voyage, Cook happened upon the Hawaiian Islands in January 1778. After two weeks of trading and friendly interaction with the islanders, the Resolution sailed north in search of the fabled Northwest Passage. The next several months were spent mapping much of the west coast of North America, with the expedition reaching as far north as the Bering Strait. As fall was setting in, Cook headed south to warmer climes.

On the morning of January 17, 1779, Captain Cook and his two vessels entered the protected waters of Kealakekua Bay during the height of a religious festival honoring the god Lono. The Hawaiians reportedly greeted Cook as Lono incarnate and honored the captain during the remainder of the celebrations. After the festival, Cook and his crew left the islands but encountered a fierce storm that snapped the foremast of the Resolution. After returning to Kealakekua Bay for repairs, a schism developed between the islanders and the explorers, and one of Cooks small launches was stolen. Planning to take the chief captive until the vessel was returned, Cook rowed ashore with several of his crew. The abduction, however, was thwarted, and Cook and his men retreated to their boats on the beach. While trying to return to the safety of the Resolution, Cook was struck on the head and stabbed to death along with four of his men.

In 1908, a tall wooden mast topped with a lens lantern was placed on the point just west of where Cook fell to mark Kealakekua Bay, regarded as the finest anchorage on the western coast of Hawaii. The light station property on which a keepers dwelling was also erected was 2.93 acres in size and was relinquished to the federal government by Governor Frear on March 16, 1909. Oliver Kua, a local farmer, served as the light's second keeper.

Today, a concrete pyramidal tower, built in 1922 just west of the Captain Cook Monument, serves to mark Cook Point and the northern entrance to Kealakekua Bay, a marine sanctuary frequented by kayakers and snorkeling expeditions. The ground on which the Cook Monument stands was deeded to the British Government, and a ship is reportedly sent by the British to perform regular maintenance.

For a larger map of Minor light of Hawai'i - Napo'opo'o Lighthouse, click the lighthouse in the above map.

To reach Napo'opo'o on foot, take Highway 11 south from Kailua-Kona to the village of Captain Cook. Veer right at mile marker 111 onto Napo'opo'o Road. Park on your left immediately after you leave Highway 11. Walk across the road and south a couple hundred yards to telephone pole #4, besides which will be a dirt path leading down to Kealakekua Bay.

You can also visit Kealakekua Bay on a snorkeling trip with Fair Wind II, Sea Quest, or Captain Zodiac.


We visited Kealakekua Bay in February aboard a Seaquest Raft, and as there were just three passengers aboard, we received a very personalized (and entertaining) tour of the amazing Kona Coast. After spending an hour or so seeing all sorts of colorful fish in the bay, we were treated to fresh pineapple and then an up-close look at the volcanic shoreline. Between sets of breakers, our captain would race into lava caves. I had to assume the captain knew what he was doing since he had survived numerous such adventures, but I have to admit I always had one eye on the next approaching wave. The waves strike the coast with such force that they create waterfalls that stream down the black lava and into the ocean. Humpback whales were also in the area, and we got an amazing view of some of these incredible giants.

Passengers aboard the snorkeling vessels that frequent Kealakekua Bay are not allowed to go ashore at Cook monument, even though there will likely be several kayakers and hikers around the obelisk. You might get a better view of the lighthouse and monument from land, but approaching the bay from sea has its own advantages.