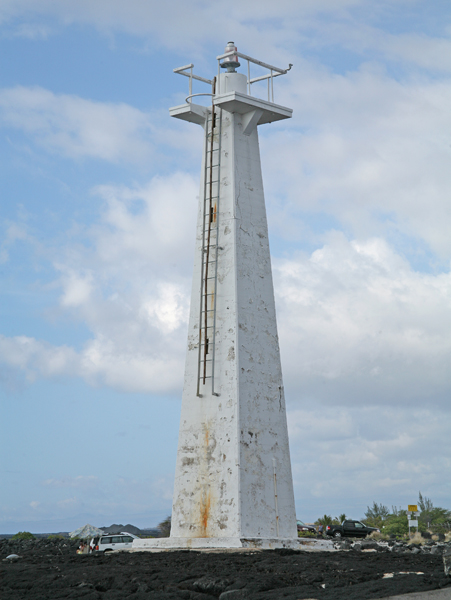 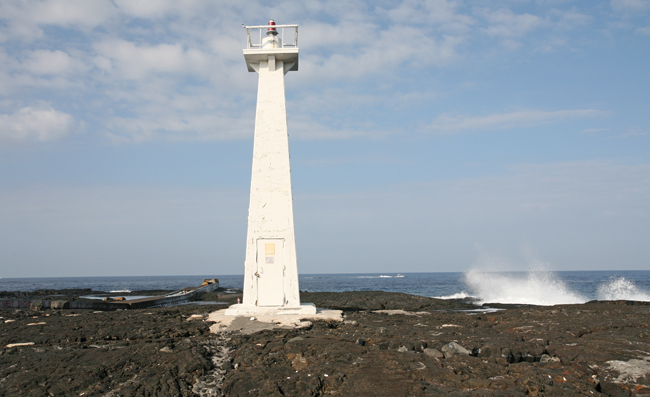 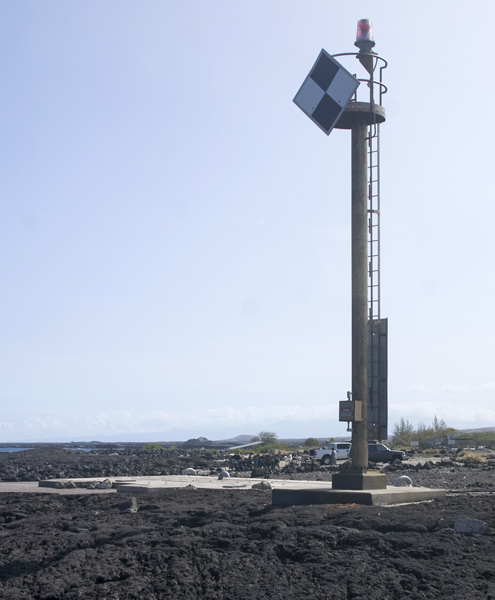 Under the direction of the Lighthouse Board, a light was placed at Keahole Point, the westernmost point on the Big Island, around 1908. A fixed red lens-lantern was mounted on a thirty-six foot white wooden mast to produce a light with a focal plane of sixty feet. A service house topped with a red roof was built at the base of the mast, and a light gray one-story keeper's dwelling, embellished with red trim and a red roof, was built 550 feet east of the light.

In 1915, one of the many concrete pyramidal towers used in Hawai'i was built on Keahole Point. This one stood thirty-three feet high and displayed a white flashing light. Although you can drive to the point today, this has not been the case for too long. Coast Guard personnel servicing the light in the 1940s noted that the light "could be approached from land, but it is not recommended. ... Five miles of the drive is only a trail and should not be attempted in a vehicle without four wheel drive and of the most sturdy sort; in any event the last five miles is directly over a lava bed and cannot be traveled except by walking."

Sharing the point with the light today is the Keahole-Kona Airport and the Natural Energy Laboratory of Hawaii Authority. The state developed this area to promote research on the ocean thermal energy conversion (OTEC) process and its related technologies. Pipeline systems pump both deep and surface seawater to shore around the clock to support several companies established on the point.

Sometime between 2008 and 2010, the concrete tower at Keahole was replaced by at metal post light that is topped with a diamond-shaped daymark. The pole's flashing white flight has a red sector that covers rocks off Makolea and Kaiwi Points.

Although the airport's aerobeacon can be seen farther offshore than the Keahole Point Light, the Keahole Light still serves the important role of marking the western extreme of the island of Hawai'i.

For a larger map of Minor light of Hawai'i - Keahole Point Lighthouse, click the lighthouse in the above map.

From the Keahole-Kona International Airport, drive south for just over a mile on Highway 19 and then turn west onto Otec Road, which leads to the Natural Energy Laboratory of Hawaii Authority and Wawaloli Beach. Follow the road past Wawaloli Beach to its end, where you will find the light.