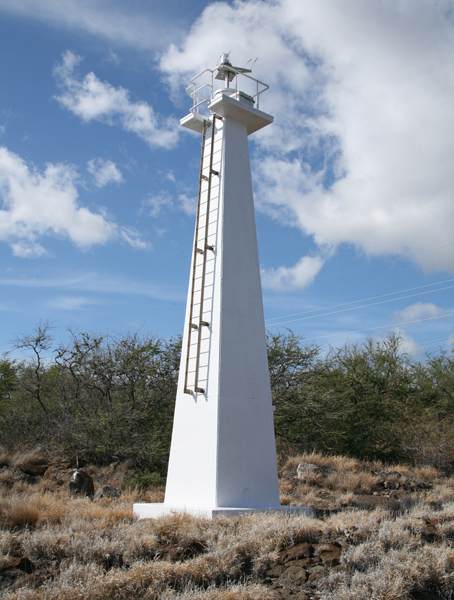 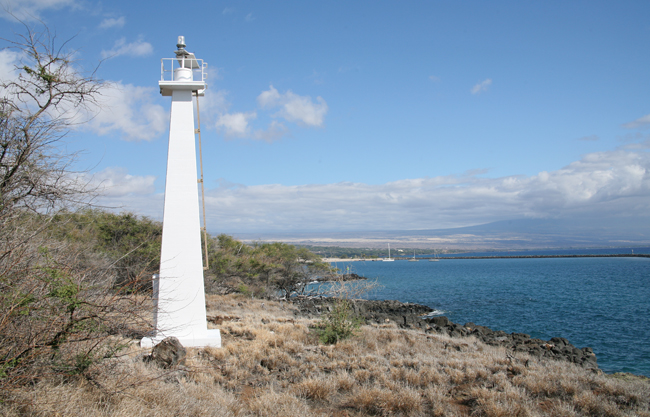 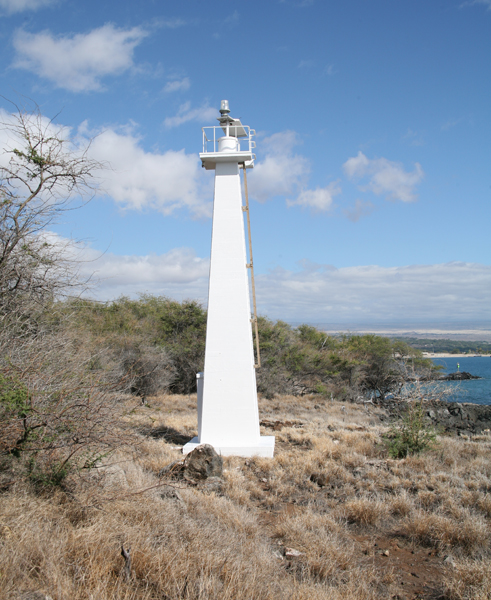 Honolulu and Lahaina were the two main Hawaiian ports in the 1800s when whaling ships were calling at the islands for provisions, but by 1845 Hilo and Kawaihae on the Big Island had become important stops for procuring fresh food and beef. Cattle were also being shipped from Kawaihae, located on the northwest coast, to supply the whaling needs at Honolulu and Lahaina. The first beacon to mark the anchorage at Kawaihae was built in 1859 by G.W. Macy and Company, but when this aid fell into disrepair, the Hawaiian government built a replacement in 1869. Sam Chillingworth was selected to construct the lighthouse, and on June 23, 1869, he sent the following report on his work to Frederick W. Hutchinson, minister of the Interior.

I have framed in the stonework, and built a strong platform and protecting house and having whitewashed everything in connection with the light, it is now in a firm and complete state, and from this date the light will be attended from sunset to sunrise without intermission.

Chillingworth stayed on to serve as the first keeper of his light for a salary of four dollars a month.

While Chillingworth was serving as keeper, the lamp used in the lighthouse exploded on two occasions. On November 24, 1874, a kerosene lamp exploded and destroyed the glass used in the lighthouse. The second incident, which occurred on May 19, 1877, was more serious and resulted in the destruction of the lantern and wooden support frame. Chillingworth wrote his superiors stating that "a new stone rest can be built for $150, with a wooden hood for the light. A new lantern is needed." Until repairs could be made, a kerosene lantern was borrowed from neighbors and displayed from a wooden pole.

In his annual report for 1902, the superintendent of Public Works for the new Territory of Hawai'i mentioned that a new light had been built at Kawaihae, "the old light being low and shaded. The light was exhibited from one side of a wooden shack, that rested atop a pyramidal wooden trestle tower. No dwelling was provided for a keeper, and a footpath led to the village, distant about one-quarter of a mile."

The present Kawaihae Lighthouse, a thirty-six-foot pyramidal concrete tower, was erected in 1915. Between 1957 and 1959, the anchorage at Kawaihae was dredged and a breakwater was constructed to form a deep-draft harbor. The harbor has since been kept busy with shipments of molasses, petroleum, and military cargo. The present Kawaihae Light produces a white flash once every six seconds. A pair of nearby range lights also serves to guide vessels into the harbor.

For a larger map of Minor light of Hawai'i - Kawaihae Lighthouse, click the lighthouse in the above map.

From the junction of Highways 19 and 270 on the western shore of the Big Island, proceed north on Highway 270 for 1.8 miles, passing the Kawaihai Small Boat Harbor, and you will see the light on your left.