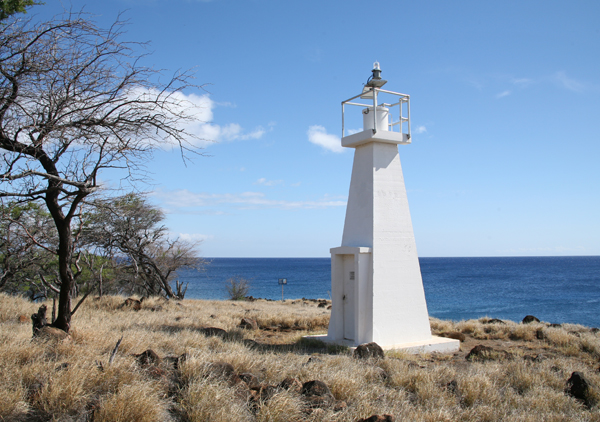 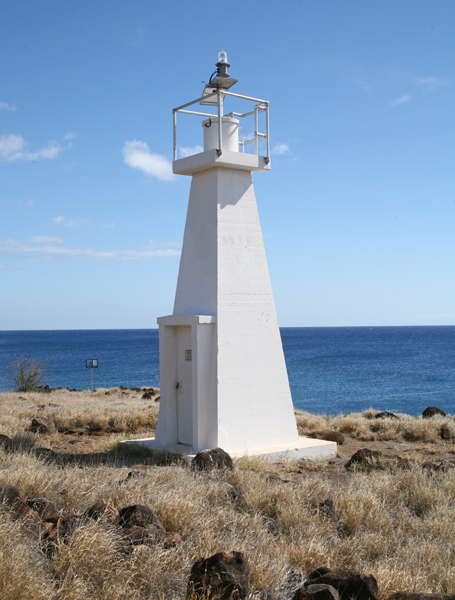 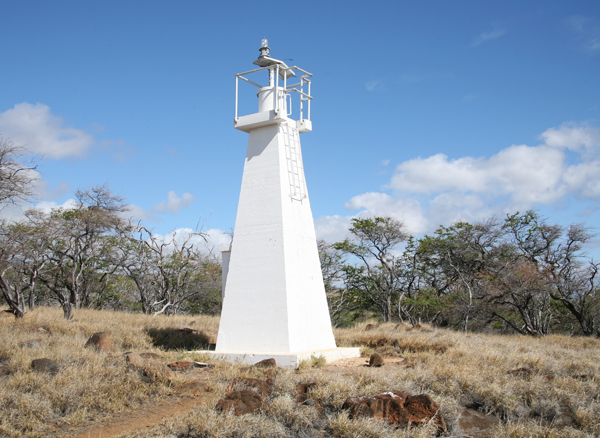 In the late nineteenth century, sugar plantations were prospering on the Big Island. Six plantations in North Kohala, the area that includes the islands north shore, used a couple of crude landings along that rugged coastline for exporting their products. Steers would pull heavy wagons full of sugar or molasses to the landings where, braving high surf and swell, men loaded the cargo onto flatboats, which would transport the goods offshore to awaiting steamers. In winter, the use of the landings was often too risky due to large breakers, so the sugarcane byproducts were transported over the hill to Mahukona, a protected small cove on the leeward side of the island. In 1881, Samuel G. Wilder, owner of a steamship company, initiated work on the Big Islands first railroad that would solve the Kohala plantations transportation problem by connecting them to the port at Mahukona. Wilder started with improving Mahukona port through the addition of numerous wharfs and a storehouse. By March of that year, the first section of ties and tracks had been laid, using 100 Chinese as workers under the supervision of twenty Caucasians. In January 1883, the tracks covered almost twenty miles, reaching the northernmost sugar fields of Niulii, and the Hawaiian Railroad was complete. The steam locomotives traveled twelve miles per hour, crossing seventeen gulches and rounding twenty-five sharp curves. The train was a novelty for locals, and tourists were visiting from Hilo to take a ride. Plantation owners were also pleased with the new railroad as their revenues started to surge.

In 1889, Charles L. Wight, president of the Hawaiian Railroad Company, requested the construction of a light to mark the port at Mahukona. Foreign vessels call here about every three weeks and they often lose much time not knowing where to come in. In thick weather it is also hard for steamers to find the place. In addition it will be of material assistance to the vessels bound up the channel.

Wight suggested that the light be built on a ridge south of the harbor and estimated that it could be constructed for around $250 and then maintained by a local for $12.50 a month. Wight also voiced his opinion on who should construct the light. I do not believe that it will be economy to send men from Honolulu. Wages are higher there and generally men coming from there are apt to make a holiday of a trip of that kind. I would accordingly suggest waiting till men from this district are available.

The light was built south of the anchorage at Mahukona according to Wights suggestions and took the shape of a truncated cone that tapered from a bottom diameter of twelve feet to an upper diameter of three feet. The tower was built of rock, covered with a thick layer of mortar, and topped by three feet of solid concrete. A ladder ran up the outside of the tower to a platform on which a five-sided lantern was mounted. Framed in oak and finished in redwood, the lantern had three-quarter-inch glass plates on four of its faces, and a door in the fifth. The roof of the lantern was sheet brass, and inside a one-hundred-candlepower lamp was exhibited atop a nickel-plated brass stand.

On August 5, 1889, W. D. Alexander, surveyor general, reported that the tower was complete and that the light, at a focal plane of seventy-five feet, was visible for ten miles.

On June 20, 1907, a lens lantern light was established fifty-one feet to the east and eleven feet west of the old tower. This new structure consisted of a white mast, having at its base a small white house with red roof and lead-colored trimmings, and the light was exhibited thirty-five feet above the ground and sixty-four feet above the water. In 1915, the present twenty-two-foot concrete pyramidal tower was built near the original Mahukona Light and topped by a flashing acetylene light.

The Mahukona port was closed at the onset of World War II for security reasons, hurting the fortunes of the railroad. However, efficient trucks for hauling the sugar cane had already been introduced and a special thoroughfare known as Pratt Road was dug for the vehicles. After the 1945 season, the train ceased operation. The five sugar mills of North Kohala sugar consolidated in 1937, but due to cheaper labor available elsewhere - Hawaiian sugar workers earned $3 an hour in 1968 for a 40-hour week while those in Haiti, the Philippines, or Indonesia would work for 9 cents an hour - production on Hawai'i stopped in the early 1970s.

The harbor at Mahukona is now part of Mahukona Beach Park, which is a popular spot for swimming, snorkeling, and camping. The remains of the original tower can still be seen just north of the current Mahukona Light.

For a larger map of Minor light of Hawai'i - Mahukona Lighthouse, click the lighthouse in the above map.

Take Highway 270 towards the northern end of the island. Six miles before the tip of the island you will find Mahukona Beach Park Road towards the west. Follow this road as far south as you can, park, and then follow the trail that goes south along the shore to the light.


We didn't know about the trail that runs close to the shore, so we did our own trailblazing to reach the light. En route to the light, I felt something in my shoe and, thinking it was a pebble, removed my shoe to empty it. As soon as I put it back on, I could still feel something inside my shoe. Turns out it was a long thorn that had penetrated the sole of my tennis shoe. I'm just glad the thorn wasn't any longer, or that could have been a very painful experience. I assume the thorns come from those trees that look as if they belong in Africa.