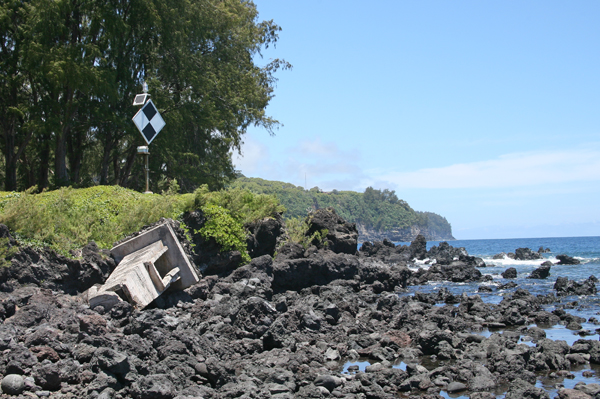 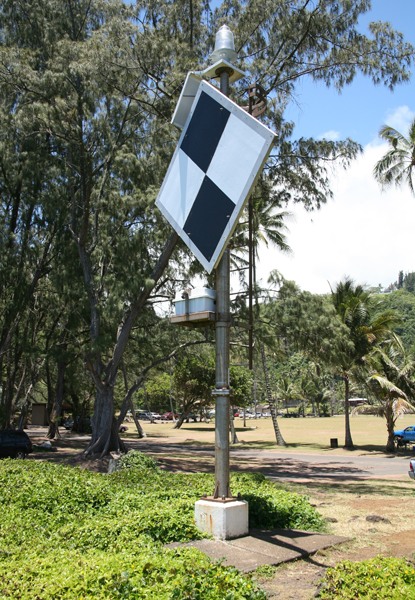 Laupahoehoe means "lava leaf" or "smooth lava flat" and is an apt description of this small peninsula that was formed when lava flowed down a valley and formed a delta extending several hundred feet into the ocean. In 1890, the first light was built on Laupahoehoe Point, the outermost tip of the peninsula, in the form of a thirty-foot wooden trestle tower atop which an ordinary house lamp was kept in a protective box. A landing, located on the inner part of the peninsula, was the only place besides Hilo on the Big Island's windward coast from which passenger boat service was available. When it assumed control of the islands lighthouses in 1904, the Lighthouse Board provided the following description of the tower on Laupahoehoe Point:

This is a fixed white light of low power, shown by an ordinary house lamp, estimated to be 35 feet above high water. It is shown from a box on a wooden trestle tower 30 feet high. The tower is in a dilapidated condition and the light inefficient. It is distinguished with difficulty from the lights of the town behind it. There is neither dwelling for keeper nor oil house. The light marks a reef projecting into the sea.

In 1905, the Lighthouse Board replaced the original tower with a lens lantern displayed from a thirty-four-foot mast that raised the focal plane of the light eleven feet. A decade later, the point received one of the concrete pyramidal light towers that were deployed extensively throughout the Hawaiian Islands.

Just before 2 a.m. on April 1, 1946, a powerful earthquake in Alaska's Aleutian Islands triggered a tsunami that destroyed the nearby Scotch Cap Lighthouse, killing the five coastguardsmen inside. The tsunami radiated outwards from the epicenter, traveling at speeds of around 400 to 500 mph, and reached the Island of Hawai'i just after 7 a.m. that same day. At that hour, several school children had arrived on the Laupahoehoe Peninsula and were playing on the beach waiting for their school day to begin. Four recently graduated female teachers from the mainland were in a cottage nearby when the first large wave washed up the peninsula. This attracted some attention but was not considered too abnormal. A second large wave came closer to the cottage, and then the ocean receded a long ways, prompting curious children to explore the uncovered shoreline. When the third wave struck, the cottage with the teachers inside was swept off its foundation and demolished by the surging water.

Teacher Marsue McGinnis tried to scramble onto a floating rooftop but was soon buried beneath the water. "It seemed hours," she recalled, "before I came to the surface again but I remembered to hold my breath and every time I came to the surface I got another breath of air. Finally the water seemed to quiet down and I was floating near a log. I grabbed the log but I didn't even attempt to get back to shore. I saw many children floating and clinging to logs nearby and we kept floating out to sea. Some of the children disappeared. I was dumb and dazed and I have no idea how long I floated around before Dr. Fernandez found me. Before they came a plane flew over and dropped a rubber raft. I got into it."

Before setting out to attempt to rescue anyone survivors at sea, Dr. Leabert Fernandez had to first locate a boat, then an outboard motor, and then have carpenters alter the back of the boat to accept the motor. Finally, about eight hours after the tsunami struck the peninsula, Dr. Fernandez launched the boat with three other men and was able to rescue Mrs. McGinnis and two students floating in the debris. After spending twenty-seven hours on the water, three other students were pulled ashore, miles away, off the north coast of the island.

Four teachers were among the twenty-four people that perished on Laupahoehoe Peninsula that morning, and a total of 159 people were killed in the Hawaiian Islands. On the two-year anniversary of the tragedy, a white marble monument inscribed with the names and ages of those who perished was dedicated in memory of those who lost their lives in the tidal wave of April 1, 1946. After recovering in a nearby hospital, Mrs. McGinnis later married Dr. Leabert, her rescuer.

The concrete light tower managed to survive the tsunami intact, but its foundation had been undermined by the powerful waves, and it toppled over the following year in a storm. The Coast Guard erected a new tower with a similar, pyramidal shape, but this one was a skeletal tower built of metal. In 1975, a modern, solar-powered light atop a twenty-foot metal pole was placed on the point.

Although the 1947 tower was removed from the point, its predecessor, the concrete tower that survived the tsunami, lies broken on the lava rocks in front of the present tower. For those who know its history, the fallen tower seems to belong on the point as a relic from the day of the tsunami, which battered Hawai'i as it was still recovering from World War II.

For a larger map of Minor light of Hawai'i - Laupahoehoe Point Lighthouse, click the lighthouse in the above map.