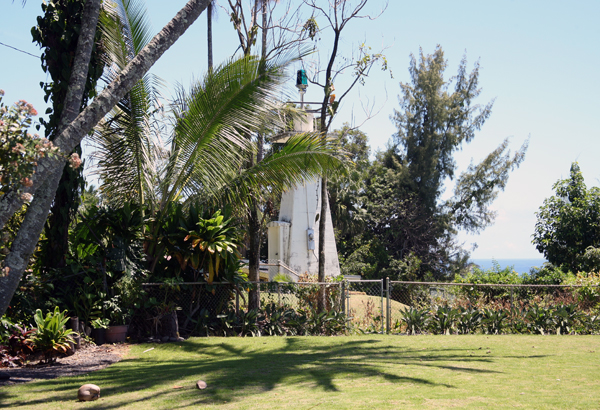 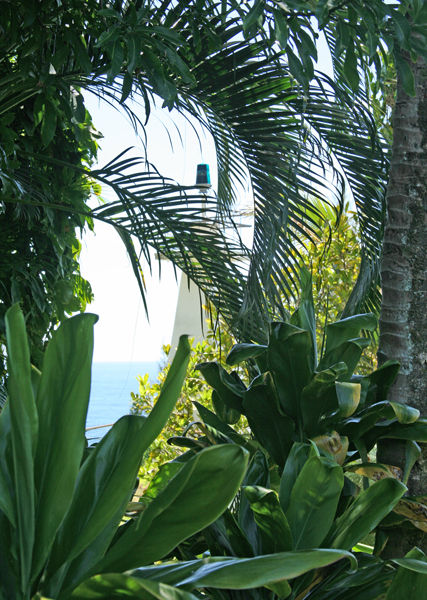 Hilo Bay has long been the most important anchorage on the Island of Hawaii, so it was a natural place for one of the islands early lights. Before a breakwater was constructed, the bay was somewhat sheltered by a submerged coral reef which curved westward from Coconut Island, on the eastern side of the bay. The channel leading into the bay was thus defined by bluffs to the north of Hilo and the western extremity of the coral reef. Several sites were suggested for the first light to mark Hilo Bay, but the one finally selected was on the shore at Paukaa, two-and-a-half miles north of Hilo. Mariners could steer directly towards the light, and then sail south to enter the bay. The light was erected for $325 and was first lit on August 13, 1869. It seems the local sheriff was responsible for overseeing Paukaa Light, and in 1871 he sent a report to the Hawaiian minister of the Interior. I visited the lighthouse yesterday and find that the Chinaman in charge is very negligent in his duties, not trimming the light properly. I showed him the proper way and tonight it shows finely from here.

In 1873, the light structure nearly blew over in a strong wind, prompting the sheriff to send another report to the minister. This is a very valuable light to vessels coming into Hilo and it should not be allowed to go out of repair; $100 will put it in good condition. I have lately bought an excellent safety lamp for it, which throws a light visible at sea from 10 to 12 miles.

Paukaa Light was described in 1880 as a fixed light with an elevation of fifty feet above sea level. Incoming vessels from abroad were being charged three dollars for lighthouse dues, and the sheriff requested that some of the collected money be used to elevate the light to make it more visible. To justify his proposal, he included the following account of an exchange he had when requesting payment of the lighthouse fee. One captain when charged for lights wanted to know where the lighthouse was and said he had not seen anything around that looked like a lighthouse.

A decade later, in 1890, a new Paukaa Light was built on the bluff above the original site. The light was described in the Light List as a white box on a white trestle, but a more accurate description would be a lamp room situated atop a wooden trestle tower with a height of thirty-five feet. Adding the height of the bluff, the new Paukaa Light had a focal plane of 159 feet.

After the Lighthouse Board took control of Hawaiis lights in 1904, a thirty-eight-foot mast was erected in place of the tower, which was considered to be in an unsafe condition. The white mast exhibited its light at a height of nearly thirty-three feet and had at its base a small white service house with red roof and lead-colored trimmings. The mast light was placed in operation on March 20, 1907.

The present pyramidal concrete tower, exhibiting a green flash every six seconds at a height of 145 feet, was placed at the point in 1925.

For a larger map of Minor light of Hawai'i - Pauka'a Point Lighthouse, click the lighthouse in the above map.

This light is surrounded by houses and only glimpses of it can be had from public land.