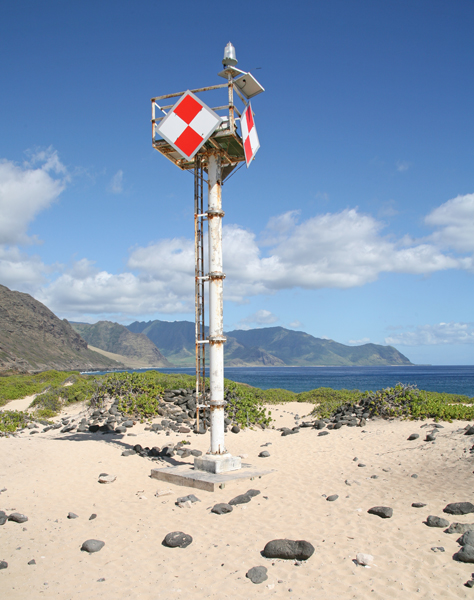 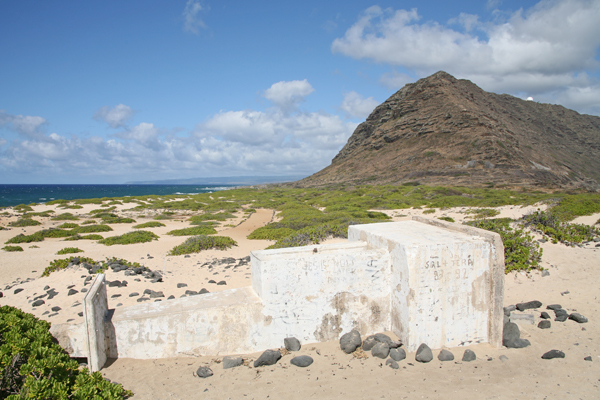 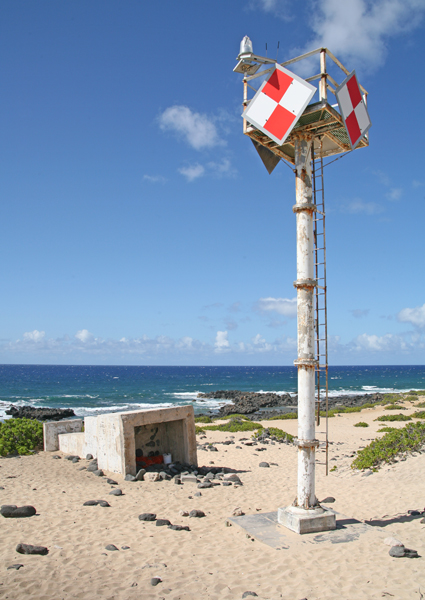 Ka'ena Point is the westernmost tip of O'ahu and is a celebrated legendary site for the Hawaiian people. The ancient Hawaiians believed that when a person died their spirit would follow the setting sun to their eternal night. At Ka'ena Point, the souls would leap from the earth and enter the underworld.

In 1919, the Bureau of Lighthouses decided to place an unmanned acetylene light on Ka'ena Point. A site was selected, building materials were hauled in, and a concrete pyramidal tower was erected at a cost of $2,479.84. Due to its remoteness, the light frequently fell victim to vandalism. Between 1980 and 1985, the light was extinguished eleven times, as senseless people shot at the lens or stole the beacons batteries. In 1990, the concrete tower literally fell victim to erosion and was replaced by a light atop a metal pole.

The Ka'ena Point Natural Reserve Area was created in 1983 to help protect the fragile dunes and native species on the point. Making the area immediately around the point off-limits to dogs and vehicles has helped restore the natural landscape and elevate the number of nesting Laysan albatross and wedge-tailed shearwaters.

For a larger map of Minor light of Oahu - Ka'ena Point Lighthouse, click the lighthouse in the above map.

From H1 in Honolulu, travel west and then follow H2 north until it ends. Continue on Highway 99 for two miles, and then continue north on 803 towards Waialua. When the road splits into Highway 930, take the western branch, the Farrington Highway, and follow it past Dillingham Airfield to its end. With a four-wheel drive vehicle, it is possible do as the locals do and drive within a half-mile of the light. Otherwise, you will need to hike in about 2.5 miles.

You can also reach Ka'ena Point by taking H1 to its western end, and following Highway 93 north until it ends. Again, roughly a 2.5-mile hike is necessary to reach the point. The trail from this direction is somewhat washed out in places.


This is a great hike for the very committed or the insane. The road is mostly a straight hike and relatively easy PROVIDED you wear good shoes and carry a couple of bottles of water. The indentations in the road and shear heat will test your will. I mistakenly wore shoes that were the equivalent of Moses sandals, and I looked like I wandered for forty years in the desert at the end of our 5-mile trek - enough so that a well meaning couple asked on my return to the car if I was okay, needed a bottle of water or a ride. Mahalo to Hawaiian hospitality!